Previewing the State of the Vikings with Daily Norseman

Share All sharing options for: Previewing the State of the Vikings with Daily Norseman 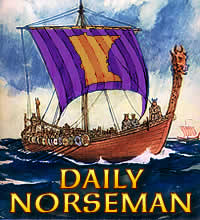 Here's our weekly Q&A with the fine SB Nation blog, Daily Norseman. They bring a lot of humor and straight-shooter analysis to their posts, like us. Here is site Manager, Ted Glover's responses to my questions including what player from our team they'd want most and a prediction:

1.) What is your take on Ponder so far? If you could go back to draft day...would you change anything?

I'm a fan of him. I think if Vikings fans are patient, he'll develop into a solid NFL quarterback. He has most definitely had his ups and downs this season, but that's to be expected with a rookie, and let's be honest, there's not a lot of talent around him to work with, other than Adrian Peterson and Percy Harvin. He's made good decisions and bad ones, and I like the fact that he seems to be able to put his most recent performance behind him, good or bad, and move on to the next game. In going back to the draft and changing anything, no, I don't think so. The Vikings have a lot of needs, but in this day and age, a good quarterback is essential, especially in the NFC North. I think Ponder was the right choice, and if the Vikings can get him some protection and some weapons to work with, he'll be fine.

2.) Is their optimism that the team can turn it around next year or are you guys sliding into a decade of mediocrity? AP is still playing at a high level, but RBs obviously have a short shelf live.

Wow, good question. The great thing about the NFL is that one year turn arounds aren't out of the question, but even if you have a great draft, this will probably take more than one year. I think the answer lies somewhere in between the extremes. The Vikings still have a ways to go to close the talent gap with Green Bay and Detroit, but the cupboard isn't really bare here, either. Besides Peterson, they have Harvin, Ponder, and a really good looking rookie TE in Kyle Rudolph. On defense, that's more of a project, but Jared Allen and Kevin Williams are premier players, and although Chad Greenway has had a disappointing year, he's a good LB. If Antoine Winfield can come back from a broken collarbone, he'll help steady the secondary. Is a decade of mediocrity possible? Sure, but if they can take advantage of some high drat picks next year and sign some free agents to shore up areas of need, they can get back towards the top sooner than later. Let's hope for two good drafts and some free agent signings, and if they do that they'll be back in the thick of it by 2013 or 2014.

3.) The Redskins defense has been strong in forcing fumbles and getting to the QB. Who are the weak links on the Vikings OL Jim Haslett will target?

There is no 'strong link', so take your pick. One of the reasons Christian Ponder has struggled so much in these last few games is he has been under relentless pressure. The Vikings offensive line is atrocious, and the only really top notch player on that unit, LG Steve Hutchinson, is hurt and won't play. C John Sullivan is okay, but it's a cavalcade of suck from LT to RT. When Haslett put in film of the Vikings offensive line, he probably got a boner, laughed hysterically, and said to Shanahan 'yo dog, this is gonna be fun'.

4.) If you could take one player from the Redskins roster who would it be and why?

LT Trent Williams, even taking into consideration his love affair with Mary Jane. There is such a dearth of offensive line talent on the Vikings that they need help desperately. Do I care that he's a pothead? Sure, I suppose. But if he can stay clean, he's a good LT that can play at a high level. That said, if he pops again he's suspended for a year, if I remember correctly, so the safe bet is LB Brian Orakpo. He's a young, solid playmaker at a position the Vikings need as well. And I like his Geico commercials.

5.) What's your score prediction for the game and two things we can expect to happen?

Minnesota's record is awful, and they'll probably lose. That said, they're good enough to keep the game close, and even when they fall behind, they don't lay down and quit. With Adrian Peterson back at near 100%, expect to see him get the ball a lot. The Vikings have had success with Ponder rolling him out, and look for them to try to also get the ball to Percy Harvin in as many ways possible--wide, in the slot, reverses, and even out of the backfield as an I-back. Minnesota's defense will play well in spurts, but when you absolutely, positively need to get a drive to score, you will.

Let's call it 23-13 Washington, with a 4th quarter TD and 10 points in the final stanza to seal it for Washington.

PS--I still hate your team over the 1987 NFC Championship game. Just had to get that off my chest. Merry Christmas.

Ah 1987...I was ten years old but remember that team well. And notify the presses, someone actually like Orakpo's Geico commercials.