Mike Shanahan in a recent presser shared a fantastic story from his Broncos days when facing Jared Allen, who was then with the Chiefs. A quick lesson for those that don't know, a "Crack Block" is when an offensive player starts out wide and comes in (sometimes in pre-snap motion) to block a defender who is unaware of his presence.

"He loves the game. I went up against him a lot of years in Kansas City. He just loves playing. One time we were playing, I saw Allen in the offseason. He said, ‘Hey, you've been trying to get me on this crack block." I started laughing. I said, ‘I'm going to get you sooner or later.' We were playing in Kansas City and, for some reason, he goes out of the game and we had called a play for the tight end to come in and block him. And so we just kill the guy who's been substituted for him and I look across the field and he's pointing his finger at me and he's laughing as hard as he can. I couldn't help it, I had to start laughing myself. I saw him in Vegas that offseason and he looked at me and said, ‘Oh, that was the funniest thing I've ever seen. You just killed my substitute. That could have been me.' He's a fun guy. He enjoys playing and I was so happy when he left Kansas City when I was there [in Denver] to go to Minnesota. But then, unfortunately, we've got to face him this weekend."

Jared Allen and Mike Shanahan in Vegas together? If I had time to photoshop them at Club Tao with matching mullets I would. OK, I did have time. That pic is after the jump.

I'll certainly be looking for the crack back block on Jared Allen, Saturday. Any one have any predictions on who will succeed? Moss has to be the favorite lining up on Jared Allen's side so often, although Moss might literally bounce off him. My money is on Helu. Cornerbacks are suppose to yell "CRACK!" to warn their defensive ends of the potential blind-side block. Imagine how much that "CRACK!" call used to confuse Dallas defensive linemen in the 90s. Michael Irvin probably jumped off the bench and started scratching his neck. 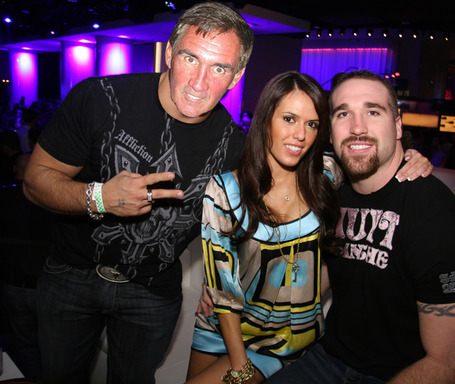 Also, here's a swell video I found of Jared Allen teaching a speed rush with a rip move for all you youngins out there.

(H/T ExtremeSkins - which includes a lot of great quotes from Shanahan, Leslie Frazier, and Jared Allen.)