Share All sharing options for: Visanthe Shiancoe says some Vikings players gave up; Easy Win for Redskins This Week?

I feel like I'm in bizarro world. Although the Redskins record is Zorn-esque at 5-9, something definitely feels different with this team. All of the Shanahan's work in preparing the team each week is noticeable, and for once, drafted players are the ones making major contributions.

The Giants are an utter mess right now with Antrel Rolle publicly sounding off on veterans not practicing and the effort not being there. Well, for the second week in a row it looks like the Redskins will face a team with tee times on their mind. The Vikings got down early versus the Saints last week and the Vikings mailed it in:

Offensively, the Vikings are pretty much in the bottom 10 in every category. Although they rank 5th in rushing yards per attempt (5.2), the Christian Ponder led passing unit ranks 5th worst, which surely was damaged thanks to Donovan McNabb's six porous games (1-5 record). Surely, the 2-12 Vikings are not a gimme. Jared Allen, Adrian Peterson, Percy Harvin can make plays and heck, if the Chiefs can beat the Packers, why can't the Vikings beat the Redskins? For the first time I can remember the Redskins are FAVORITES....by 6.5 points no less.

If the Redskins get a lead early, this game could get ugly for the Vikings fast, and I'll toast my egg nog to that. Oh, and Jim Haslett, if you're reading this post, make sure you game plan for the Vikings trickery play where QB Joe Webb fake hands off to QB Christian Ponder! 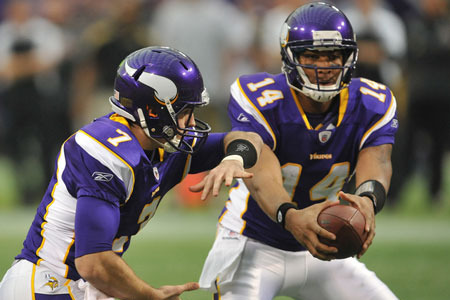