Share All sharing options for: Roy Helu - Current Face of the Franchise?

Redskins running back Roy Helu just put up his third consecutive 100+ yard game, the first Redskins rookie in franchise history ever to do so! Helu has started to take a heavier workload as the starting running back, in the three games that he's done so he put up 108 from 23 against Seattle, 100 from 23 carries against the Jets and 126 from 27 carries against New England. The Redskins offense, as a result, has played well in all three games. The offense is built on a successful running game and with the emergence of a consistent runner in Helu, the groundwork is there to build the rest of the offense from. So my question is: Is Roy Helu the current face of the Washington Redskins franchise?

I mentioned there that he ran for 126 yards from 27 carries against the Patriots, lets have a look at a few of those runs. 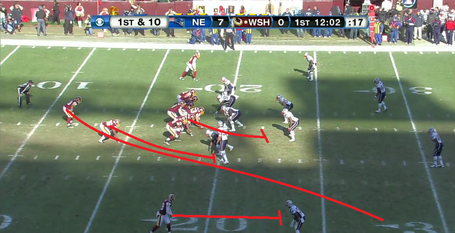 Early in the game here, the Redskins trailing by seven and need something to get them going. The key blocks here are from right guard Chris Chester, fullback Darrel Young and wide receiver Santana Moss. Chester is going to get to the second level and block off the linebackers from coming across to make a play. Young is going to throw himself at the outside linebacker that's lined up on the line of scrimmage to give Helu a chance to get outside, while Moss is going to maintain a block on the outside on a cornerback. 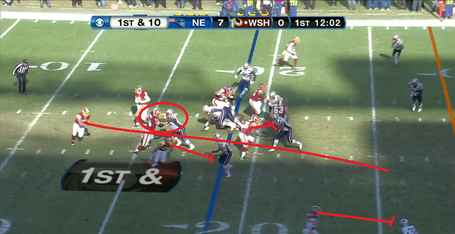 Reverse right tackle Tyler Polumbus gets pushed back off the line of scrimmage but in Mike Shanahan's zone-blocking system, as long as you can maintain the block you can get away with being pushed back. Polumbus manages to at least get a decent angle on the patriots defensive lineman that in tandem with Chester's block, creates a seal on the inside. Young dives at the feet of the linebacker, which is enough to allow Helu to do this:

Helu sticks his foot in the ground and cuts back inside without losing any speed. That's an amazing cut right there! (Editors note - Let me know what you think of the animated gif in the comments) 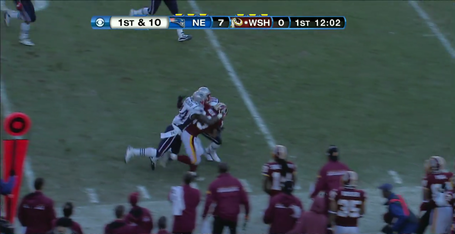 Helu is eventually brought down, but fights for more yards and falls forward getting himself 15 yards on the run.

That appeared to spark himself and the offense into action. Here's another play from later on in the first quarter. 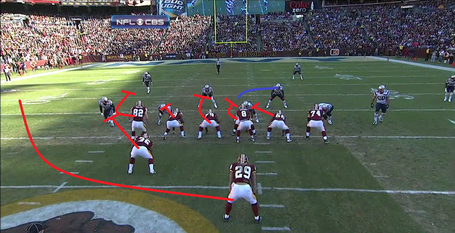 This was our best run of the day. It was Mike Shanahan's offense executed to near perfection. The first thing to notice is Chester sliding to his left and taking on the Patriots nose tackle Vince Wilfork. This allows center Will Montgomery and left guard Maurice Hurt to get up to the second level (quick note, interesting to see they allowed Chester to block the nose, Montgomery had been having a tough time doing that of late). Back up left tackle Willie Smith takes on the defensive end one-on-one. Tight end Logan Paulsen will chip the outside linebacker before going to the second level to take the safety, trusting that Young will come up behind him and take the linebacker. All of this allows Helu to just stretch to the outside. 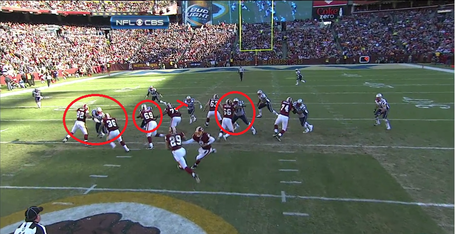 As Helu takes the hand-off, he can see that the outside linebacker is coming off the chip from Paulsen, Smith has his block contained and that Chester has control of Wilfork on the inside. He could potentially have cut it back right there and followed Hurt and Montgomery back inside, but Helu decides to stretch it outside. 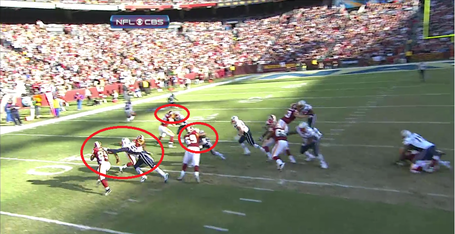 Young maintains his block for just long enough to allow Helu to get to the edge. Once he's past that block, he has Paulsen engaged on the safety and Smith still blocking the defensive end on the inside. 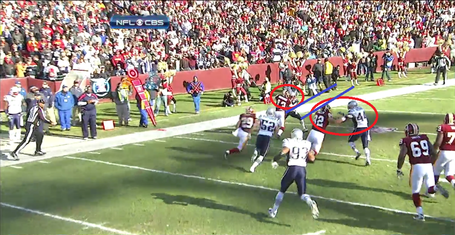 Helu turns upfield, leaving the linebackers and defensive lineman for dead. Paulsen keeps his block on the inside, and impressively receiver Anthony Armstrong gets a great block on a corner, giving Helu a running lane. Helu eventually gets caught by a defensive back, but not before picking up 26 yards.

Into the second quarter and Helu continues to run well. 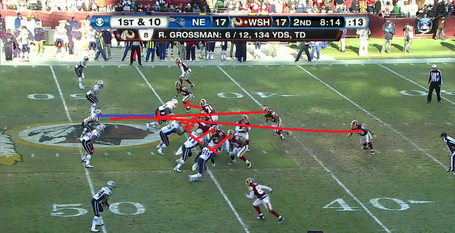 This is a cutback run, which we don't see all that often. Usually it's all stretch to the outside but they seem to have open up the playbook with Helu back there. This could have been a stretch run call, but with Polumbus deliberately showing his man outside and Young blocking the gap Polumbus creates, I'm guessing its a called cutback run. 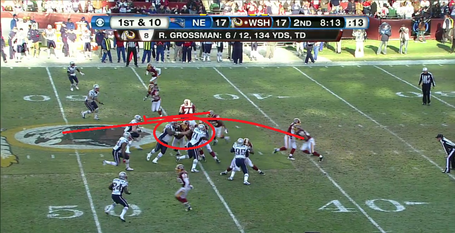 You can see the interior offensive line all block to their left, as if its a stretch to the left. With Polumbus directing his block outside, a gap between him and Chester opens up. Young comes up from fullback to lead block. 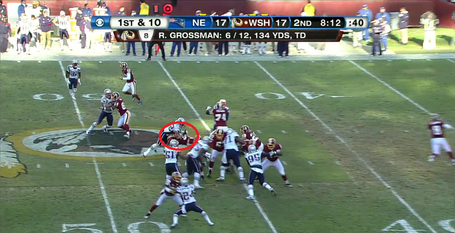 Young makes a key block to allow Helu a clean run through the hole. 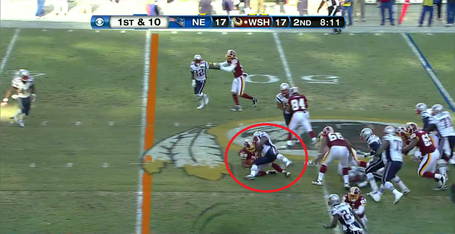 Helu is brought down for a gain of eight. Nice play call from Kyle Shanahan to keep the Patriots honest. With a few of these, the Patriots can't just over-commit to the stretch play which is typically associated with this system.

This next play is another cutback run by Helu, but I believe this was all to do with him. 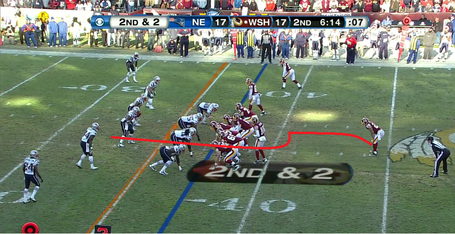 It looks like it was just an ordinary stretch run play. 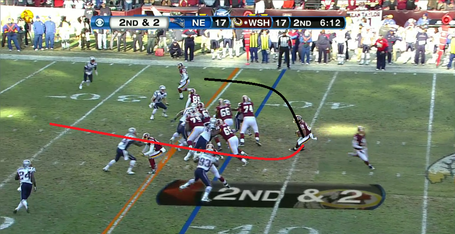 Helu shows amazing vision here. He could go outside and follow the design of the play. But he quickly spots that the Patriot's defensive end sets the edge on Polumbus. Instead, Helu cuts back inside after seeing a seal to the inside. 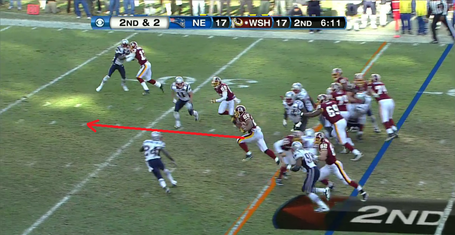 Helu bursts through the hole untouched and gets the easy first down. The two Patriots you can see closing down on him join to make the tackle, but Helu gets 8 yards on the run. 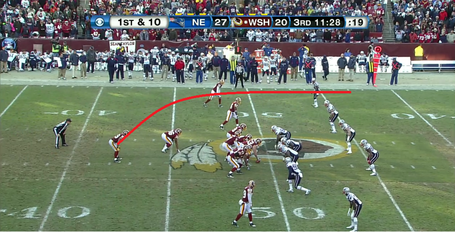 Into the third quarter now and we're back to the stretch run plays. A little thing I've picked up on the last few weeks is that they are calling for a toss, rather than a hand-off. What this does is allows Helu to get the ball in his hands quicker and get to the line of scrimmage quicker, meaning that the mix-match offensive line don't have to maintain their blocks for quite as long. 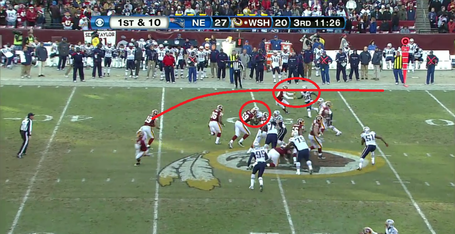 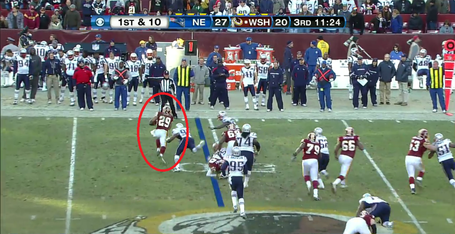 Smith can't quite maintain the block and the defensive end breaks loose. But because of the extra yard or two gained from the toss, Helu manages to run away from the attempted tackle and get to the outside. 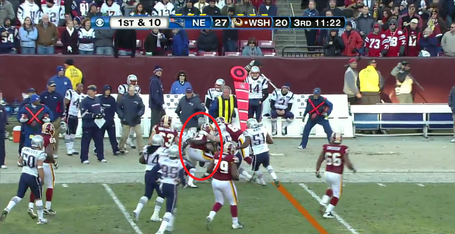 Helu turns upfield and gets pushed out of bounds for an eight yard gain on first down.

Our last play is another example of the toss stretch play. 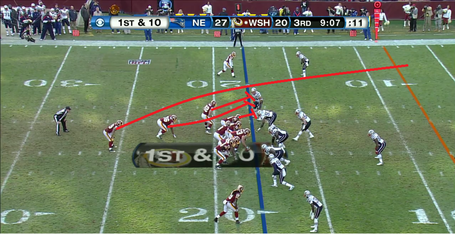 Paulsen and Young come up to push the outside linebacker further outside. Smith contains his block on the inside. 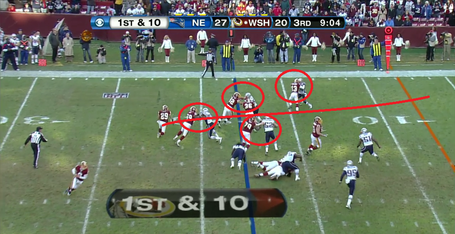 Again, Smith gets pushed back but maintains his block. Helu has the extra yard or two from the toss which sees him get around Smith's block and cut back upfield. Paulsen and Young have full control of their block, as does Armstong on the outside. Hurt only has to make contact with his block on the inside to allow Helu to run right past him. 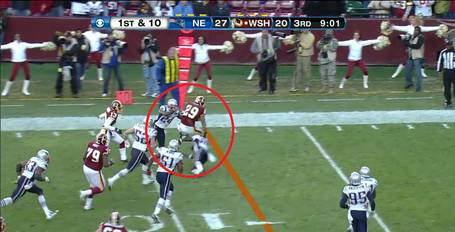 The safety comes up to try and make the tackle, but Helu attempts to hurdle him again. The safety gets help from the corner and manages to make the play, but Helu falls forward and picks up 12 yards and another first down in the red-zone.

I'm going to argue that as of right now, Helu is the face of the franchise. He provides a base for the offense to build from and provides a big play ability as demonstrated by these six plays which went for a total of 83 yards. He's shown that he can be the main workhorse with an increased number of carries but still keep to a 4.7 yard per carry average. But what do you think? If he's not the face of the franchise, then who is? Is Helu even going to be the number one guy going forward, or would you like to see them draft someone again to provide a bit more power and strength to the run game? Let us know in the comments below.