Share All sharing options for: Scouting the 49ers Weaknesses with Niners Nation 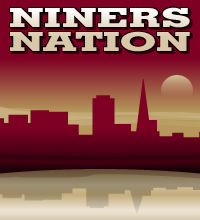 1.) What did the Bengals do defensively that kept the Niners rushing and passing attack so flat?

Most 49ers fans have elected to banish that from our brain. That game is currently playing on a perpetual loop in hell. The 49ers struggled mightily in that game and the real "turnaround" point for the season came in the second half of their following game at the Philadelphia Eagles.

The 49ers had some issues starting out flat early in the season, but are slowly turning that around. Much of the early offensive struggles were due in part to the offensive line still coming together. 49ers right guard Chilo Rachal was struggling a fair amount and has since been replaced. The team opened the season with a new center in Jonathan Goodwin, and one has to imagine that took some time to get together. Over the last month though, the rushing attack has been downright dominant.

The best bet at this point for stopping the 49ers offense is stacking the box against Frank Gore. When faced with eight or more defenders in the box, Gore averages 3.4 yards per carry. When facing seven or fewer he averages 5.7 yards per carry. Alex Smith has had a solid season but at times he struggles a bit with accuracy. I think bringing a ton of people in is the best bet to disrupt that timing and slow down the attack. It's a bit of a jailbreak sort of attack, but that might be the best bet for stopping Frank Gore right now.

2.) Putting up 25 points @ Detroit is impressive and last week the Niners had 20 vs Cleveland. Is it safe to say the Niners will rush Frank Gore all day given our bad rush defense with a mix in of dink and dunks like DHall said?

That pretty much sums up the 49ers offense. Jim Harbaugh is turning the 49ers into the pro version of what he did at Stanford. It is based on a power rushing attack and a strong defense. The 49ers will run at the Redskins as much as humanly possible. Even when the team has fallen behind like they did against Philadelphia, they did not abandon these principles. Right now they're a team that will not panic if things get ugly early.

Hall called the passing attack dink and dunk, but I don't if that's the most accurate. The idea is that it is a short passing attack, which is somewhat like the origins of the West Coast Offense. Jerry Rice made up a lot of his yards by taking a short slant pattern to the house. The 49ers passing offense is still sorting itself out in part because injuries have shuffled the receiver deck a bit. Keep an eye out for Braylon Edwards on a lot of these short patterns. Michael Crabtree has slowly emerged at receiver, but Edwards has the physicality to take advantage of the size difference between himself and the corners covering him.

3.) Are there any weaknesses on your OLine the Redskins can exploit?

The 49ers have a fairly athletic offensive line, but solid technique can get around them. And of course, brute force can help as well. Speed will potentially get you past Anthony Davis, but it will take a bit more technique and power to get around Joe Staley. The 49ers offensive line slimmed up a bit in the offseason, which has allowed them to get out and block at the second level. This has opened up bigger runs for Frank Gore and Kendall Hunter lately.

The line has really come together in recent weeks, but they are still susceptible to talented pass rushers. This is arguably their biggest test given the quality of pass rushers the Redskins bring to the table. Ryan Kerrigan and Brian Orakpo are incredibly impressive and will present a huge challenge to RT Anthony Davis and LT Joe Staley.

4.) What's your prediction and why?

I think the 49ers win by ten points. They seemed to let up a bit on offense against the Cleveland Browns, but Cleveland's offense was struggling to get much going and couldn't take advantage of some sloppy play late by the 49ers. The 49ers are a hard team to predict at times because there are times they've just run over people (Tampa Bay) and then we've seen games against Cleveland and Cincinnati where they sometimes struggled getting out of their own way on offense.

The team has taken their time unveiling much of their playbook so we still don't know the full extent of what this team can do. The best example of their offensive firepower can be seen in the third quarter of their victory over Philadelphia. Alex Smith was 9-for-9 for 179 yards and two touchdowns as the offense was operating at its highest level. We haven't seen that since in part because the 49ers haven't been in a situation where they need a lot of points quick. It's something a lot of 49ers fans are hoping for sooner rather than later.

Thanks, David. Good stuff. I'll have my prediction on Sunday, and it's not good, but as Ken reminded me, when the Redskins got blown out by Philly last year, the Redskins came back and won in Tennessee when NO ONE gave us a chance (Titans were undefeated against NFC teams going back a long time). Whatever happened to Rusty Smith?

Who wants to make a bet on how many times we see eight in the box? 25%? I guess Landry does live there, which would make eight. Stopping the run and forcing pressure on Smith can be done at the same time.