We all know at least one in each category. Which one are you?

"I remember when this team was good" guy

Your rationale - We'll never return to the glory years. You win with OLine and smash mouth football. Joe Gibbs, Bobby Beathard, and Jack Kent Cooke knew how to run a team. This sucks. I sold my season tickets a long time ago.

When we win you say - "About damn time."

About you -  You own a Redskins Snuggie, your car has Redskins magnets on the doors, and each window has the flag. You have a Redskins-themed basement and at least one person in your family wears something Redskins related every day of the week....including in March. If someone asked you what a seam route is, you would reply "I stopped sewing years ago," yet you know exactly what is wrong with this team.

About you - After a deflated ending to the season the previous year, you swore off the Redskins. After the draft and free agency, you start buying into all the chatter out of Redskins Park that this year is different. Thousands of varying "what if" scenarios go through you head, "If our OLine can stay healthy...", "If our sub-par QB keeps it simple and doesn't try to overdo it,"..."If our new guys step up, Orakpo should have 74 sacks this year....OK, let's do this now Redskins!"

When we win you say: "What did I say!?!?!? Smart football!! Run the ball. Play action. Control the game. We got a shot here to bring back a home playoff game!!"

When we lose you say: "THIS TEAM SUCKS! I knew it. We have no depth, we're poorly coached. We might not win another game!!"

Your jersey: You own a Cooley jersey but are too cool to wear it, so you wear funny or vintage Redskins t-shirts.

About you - You follow the Redskins very closely. Redskins Insider, Twitter, Facebook, Google Plus. When anything happens to the Redskins: An injury, a player is cut, a player from an opposing team is signed, rumor about signing T.O., you broadcast via all your channels how this is a dumb decision or is bad for the team.

When we win you say: "I can't believe we won that game without two starters! There's no way that the <insert next week's opponent here> " won't be ready to stop that!!!"

When we lose you say:   "At least we'll have a better draft pick."

Your jersey: Jason Campbell (You're too bitter to spend money on a new jersey) 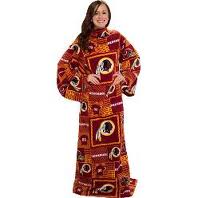