The Redskins were far from perfect defensively this week against the Seahawks, but they did enough to hold the home team to less than 20 points and give us the win. Much was made of the poor offensive line of the Seahawks and our joint number 1 ranked (at the time) pass rush, but we didn't get a sack until the 4th quarter. However, the first sack was on a crucial 3rd down play that gave us the ball back and some momentum to go with it, while the second sack was on 4th down and gave us all the momentum.

Anyway, let's have a look at the top 5 defensive plays from this week: 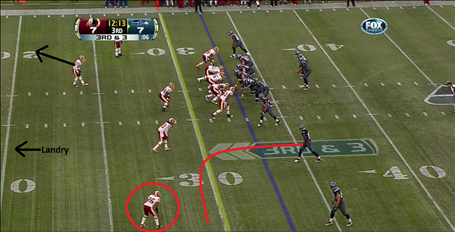 What you'll see here is the Redskins disguising a zone coverage as man coverage. As we line up, it looks like each defensive back has a man to cover, with LaRon Landry sitting deep over the top and Reed Doughty watching the running back. 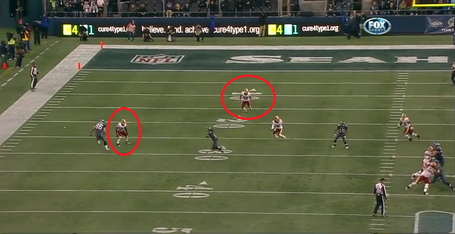 But it's actually a zone coverage with two deep safeties. Josh Wilson allows the outside receiver to run past him, with his eyes fixed on Tarvaris Jackson. He sitting in his zone and knows that he has Landry over the top to cover the deep route. Sidney Rice is running an out route, which happens to intersect with Wilson's zone. 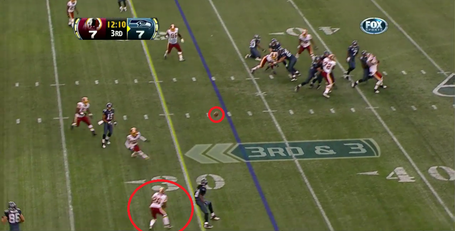 With the ball in the air, Wilson drives towards it. The throw is a bad one, behind the intended receiver Rice. 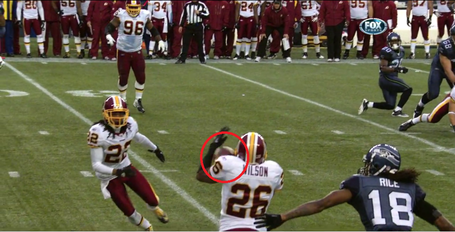 The ball his Wilson in the shoulder and he drops it, bringing back memories of Carlos Rogers... Nevertheless it was a good play by Wilson. He read the quarterback beautifully and broke on the ball in the air. If he catches that, it's probably going all the way back for a touchdown.

Our next play is from our number 1 cornerback, DeAngelo Hall. 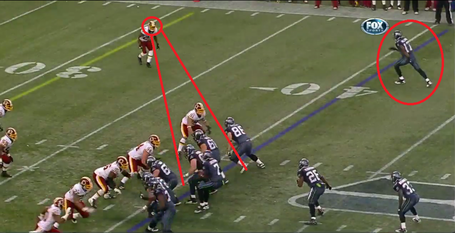 Hall is lined up against Seahawks receiver Mike Williams. But notice that he gives Williams a big 7-8 yard cushion and has his head and hips angling towards the quarterback. Jim Haslett teaches his corners to play like this. It gives them the best chance to read the quarterback and make a play on the ball if there is early pressure up front. 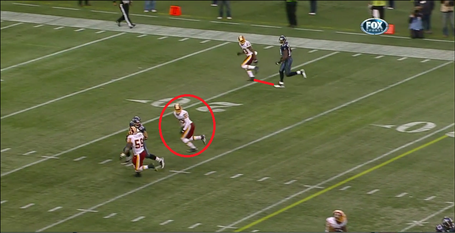 Midway through the route, Hall still has a yard cushion. This would be risky because Williams could cut inside at any given moment and create even more separation. But Hall allows this because he knows he has Oshiomogho Atogwe (that never gets easier to spell) who is reading the quarterback and ready to help cover the inside cut. If Williams cuts inside, he would have Hall covering over the top of him and Atogwe covering underneath him. This is called a high-low coverage, which quarterback generally stay away from because it is a very tight window to throw into. However, Williams is running a go route, so this is irrelevant (sorry for trailing off). 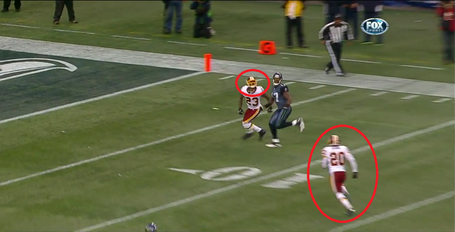 With the ball in the air, Hall does what he does best. He locates it and gets in a position to make a play on the ball. Atogwe is circled to just show my point that he was there for the high-low coverage should Williams have cut inside. 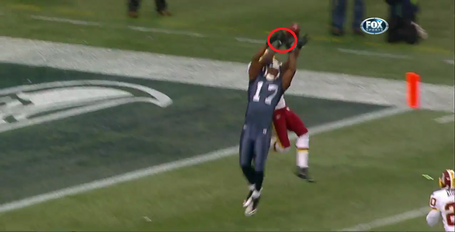 Hall gets a great leap from a backpedal and gets his hand in between those of Mike WIlliams. He knocks the ball out and it falls incomplete. Great play by Hall.

Similarly, Hall had another pass break-up later in the game. This time it was in the end-zone. 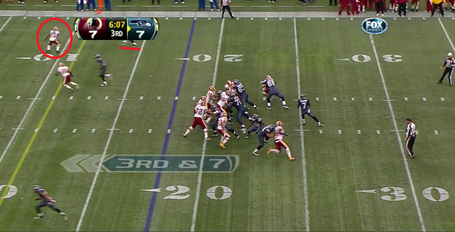 Unfortunately, for a lot of this play Hall or the receiver were behind that scoreboard in the top left corner, so I couldn't get many good pics. But I've circled Hall and underlined the feet of his receiver. Notice how Hall and Wilson's hips are both facing towards the sideline. This play was a cover zero blitz. The worst thing for a defense in cover zero is to allow a receiver to get into the middle of the field where there is nobody to cover. So Wilson and Hall are both showing the receivers the outside, allowing them to run up the sideline but if they want to cut inside they will get blocked off. 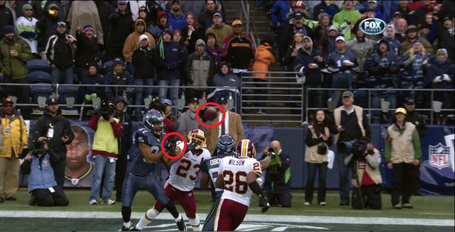 With the cover zero pressure getting to Jackson, he has no choice but to take a deep shot to the end-zone. Once again, Hall gets a hand inbetween the receivers and breaks up the pass. Two big plays from Hall.

The next play is the Redskins first sack. It's a cover zero blitz, which is quickly becoming the 'go-to' play for the Redskins defense if they need a big play. 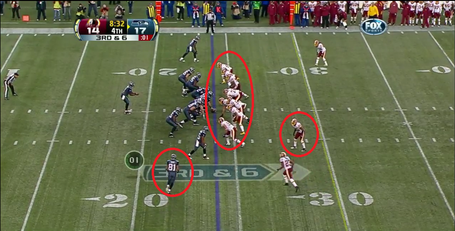 Everyone stacked up along the line of scrimmage is going to rush. The receiver in motion (circled in red) is the hot read on this play. As I mentioned on the last play, notice how Wilson is lined up. He's covering the inside shoulder of his receiver and angling towards the sideline. Again, the worst thing in a cover zero situation is for a receiver to get across the middle. Wilson is showing his receiver that he'll let him go outside but will have to go through him to cut inside. 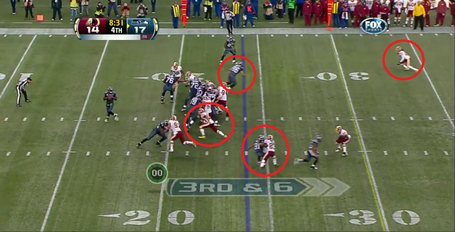 First thing to note is Landry is the free blitzer, which must be a horrifying site for any quarterback. You can also see at the top of that picture, Kevin Barnes is on his own, but there are two Seahawks receivers. The one circled in red was a missed assignment from someone. I don't know exactly who, but someone messed up their read allowing him to go free. Thankfully, he wasn't the hot read. Hall does an amazing job of disrupting the hot read and stopping him from running free across the middle. 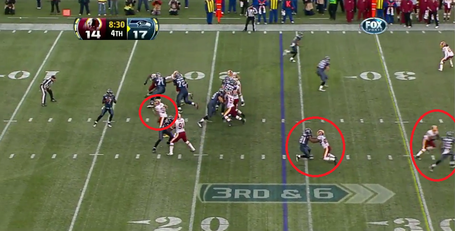 Hall does such a good job that he re-routes the receiver to come back outside, by which point its much too late for Jackson to be getting a throw off to him. Jackson's next read is to Wilson's man over the top. 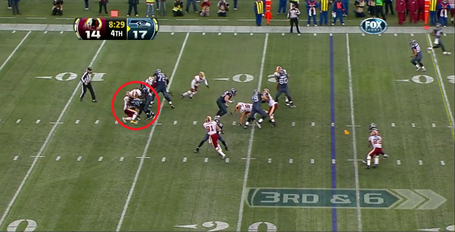 However, with Landry getting a free run, Jackson has no time at all to even attempt a deep throw. He gets sacked on 3rd down and the Redskins get the ball back with some momentum.

Our final play is another cover zero blitz. Once again is produces a sack. 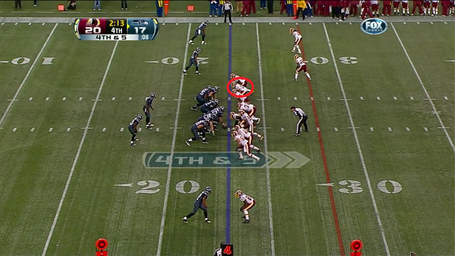 The Skins managed to get a touchdown after the last cover zero got them the ball back. With little time left on the clock, the Seahawks decide its 4 down territory. 4th and 5 is a big situation and what do the skins go to in a big situation? The cover zero. Landry is circled because his read is actually running a route. Everyone else along the line of scrimmage is rushing. 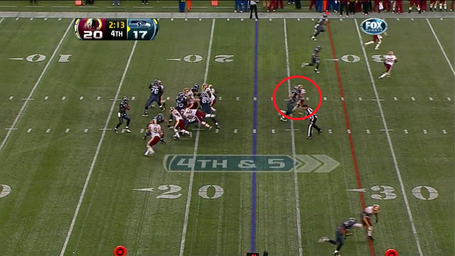 Landry is actually covering the hot read across the middle. Like Hall did on the last play, Landry does a great job of disrupting the route and making it an unlikely completion should Jackson pull the trigger. 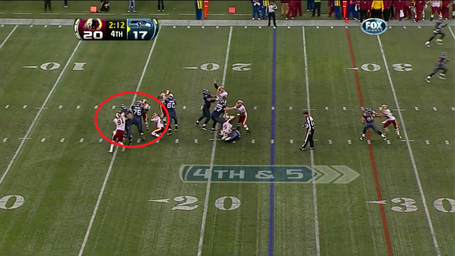 Jackson goes to check is second read, but Ryan Kerrigan bull-rushes his blocker into Jackson. Brian Orakpo also forces his man back into Jackson, sandwiching Jackson between the two. At this point it's a matter of who gets to Jackson first. 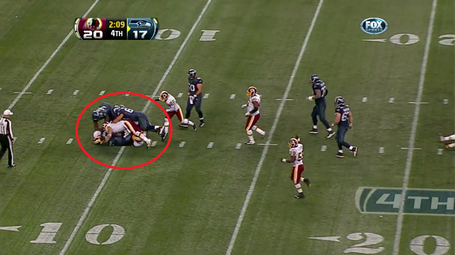 Orakpo and Stephen Bowen were credited the sack but most importantly it gave us the ball back inside the Seattle 20 with 2:09 left in the game. This pretty much killed the game for Seattle. They got the ball back again later, but they were never realistically going to score a touchdown with no timeouts and so little time left.

So there are your top 5 Redskins defensive plays for the week. Honorable mentions go to Perry Riley's tackle on Lynch that stopped him from gaining a yard in a game where Lynch looked like he would always fall forward for a couple yard. The other honorable mention goes to Hall's interception on the Seahawks final drive. I know it was an interception, but in reality the game was gone at that point for Seattle.