So THIS is how the Redskins offense was meant to work!

Share All sharing options for: So THIS is how the Redskins offense was meant to work!

Over the course of this season much has been made about Redskins offensive co-ordinator Kyle Shanahan, his system and his play-calling. With the Redskins having a 3-7 record going into Seattle and struggling to get anything going on offense, fans had started to question whether this system was out-dated and if Kyle was calling the wrong plays. But something happened in Seattle that ended in the Redskins offense amassing 416 total yards and dominating time of possession with 33 minutes and 20 seconds with the ball in their hands. For me this comes down to the offense finally starting to execute plays throughout a drive, rather than just the odd play here and there. We were far from perfect, but we got a glimpse of what this offense is meant to look like, which is what I'm going to look at now.

Mike Shanahan has always said the foundation of this offense is built from being able to run the ball. The Redskins decided to plug Roy Helu in and give him a career high number of carries with 23 (His previous high in a single game was 10). That appeared to spark the offense. His elusiveness partially makes up for the blocking up front because he can make the first tackler miss. So lets have a look at some of our run plays. 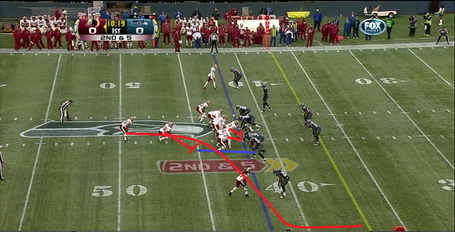 This is the biggest staple of the entire offense. You won't see a game go by where we don't call a stretch run. The idea is to get the defense moving from sideline to sideline. If the defender can't penetrate, they have to run with the play and let the runner get to the outside or they can decide to just stop moving altogether which opens up a big cutback lane for the running back. On this play, Darrel Young is going to block the extra defender on the line, while Jammal Brown and Chris Chester both work on the defensive end. 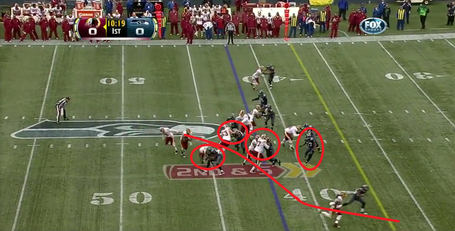 Young allows the 5th man on the line to run past intended the running lane and push him outside. Will Montgomery is struggling inside one on one. I've also circled the defender who eventually makes the tackle on Helu. 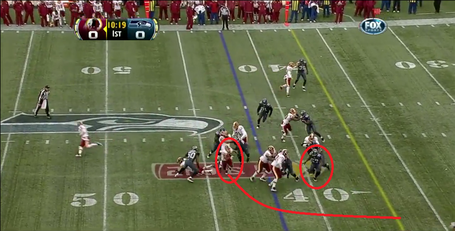 Helu's speed gets him to the hole just before the it closes (making up for Montgomery struggling). At this point, Brown is still engaged with the defensive end, but should be looking to get to the second level on to the linebacker. 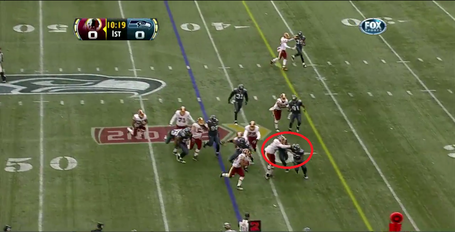 Brown is slightly late in his attempts to engage the linebacker, meaning he can only get an arm on him to slow him down slightly. 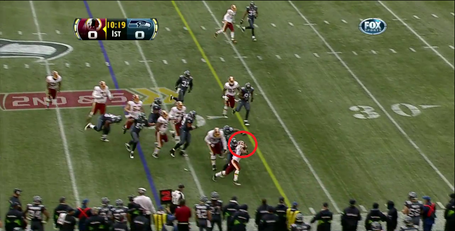 But Helu's momentum takes him past the first down marker for an 8 yard gain, despite the initial contact happening before he gets to the first down (hint of a facemask?)

We also saw a couple of 'toss' stretch runs. It's the same concept, but rather than the quarterback taking the steps back and handing it off to the running back, he tosses the ball to him. There are positives and negatives to this. It allows the back to get to the line of scrimmage quicker because he gets the ball quicker. This means he can hit any holes earlier before the defense has a chance to respond. However, the downside is that sometimes holes take time to develop and if the runner is getting there before the holes develop, they aren't going to get many yards (and obviously, there's always more of a chance the back could fumble the ball on a bad toss). 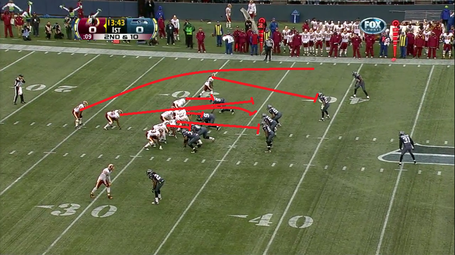 A quick explanation of what's happening here. Both guards, Chester and Maurice Hurt, are getting upfield to the second level, with fullback Young following in behind Hurt. 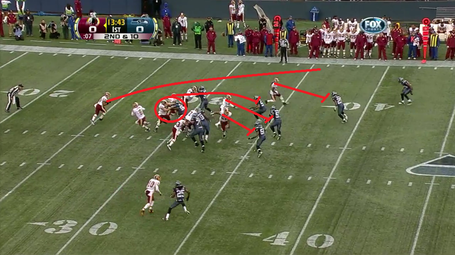 Once again Montgomery struggles off the snap, getting pushed back by the defensive tackle. Both guards are quick to get upfield, with young not far behind them. 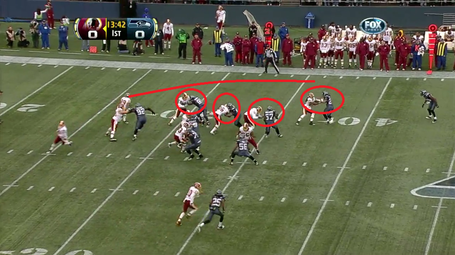 At this point, all the blocks look like they are good ones. Everyone has engaged their defender, leaving Helu a clear path to the outside. 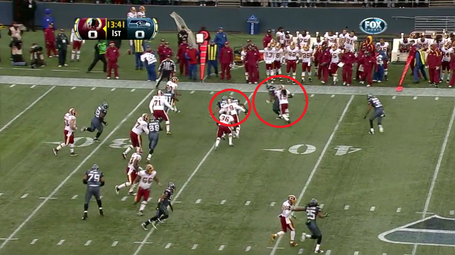 But nobody is able to sustain their block, so Helu gets brought down for a 4 yard gain. Still a solid run, but maintain blocks for another second or two, and Helu is one on one with a safety and could have taken it to the house.

Shanahan has also preached about commitment to the run game and having a balanced offense. We saw more of that on Sunday. In the 4th quarter, 3rd and 3 and down by 10, the Redskins hand off to Helu. 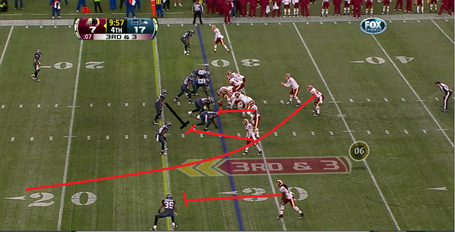 The keys to this play are Fred Davis, Santana Moss and Donte Stallworth. Fred Davis is going to pull off a couple of really good blocks inside to seal the edge. Moss is going to occupy a linebacker while Stallworth takes on a cornerback. 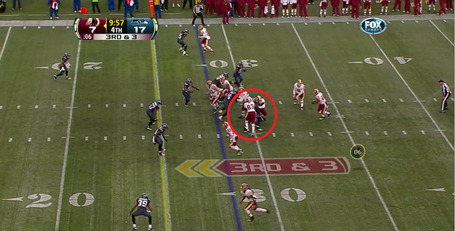 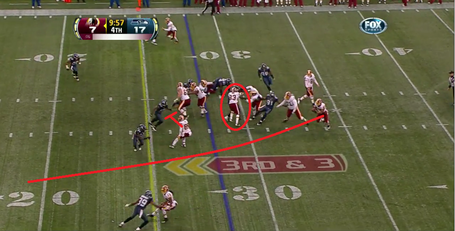 And there's the second, sealing off the inside beautifully when it initially looked as though that might have been a problem. Moss is going to hold off the incoming linebacker, giving Helu a one on one with a defensive back. To which Helu does this... 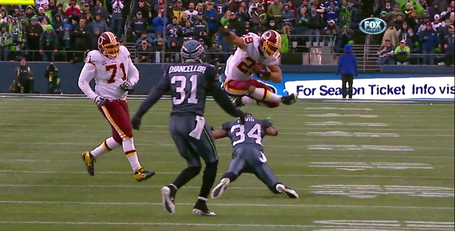 It's the awesome, epic, super-duper, bedazzling (or whatever you want to call it) hurdle by Helu. 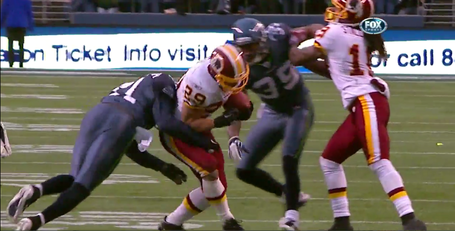 Not only does he hurdle one defender, he takes a hit from safety Chancellor as he lands and just shrugs it off. He gets into the open field, and takes it 28 yards for a TD to put the Redskins right back into the game.

With a solid run game established, you can start to develop the play-action passing game. This is what this offense is based on. With the stretch run game, you get the defense running one way. When you bootleg a quarterback out of it, you'll get easy completions on crossing routes. 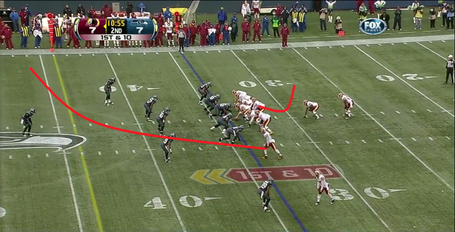 Rex Grossman is going to fake the hand off to Helu, with the whole offensive line blocking to the left to sell the fake while Grossman bootlegs out to the right. Jabar Gaffney is going to run a crossing route from the slot. 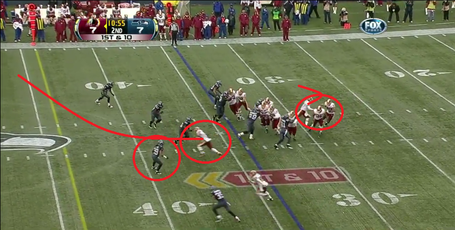 As Grossman fakes the hand off, the hole defense starts to run to where they think Helu is running the ball. Even the corner covering Gaffney is frozen in place, allowing Gaffney to get a couple of yards advantage on him. 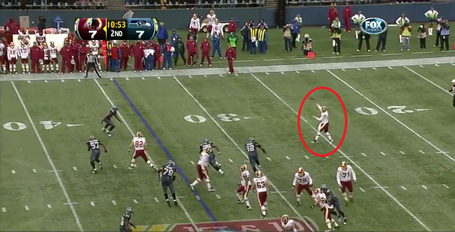 Grossman makes a good throw on the run (Did I really just say that?? On a side note, I think the Pneumonia may have been a blessing in disguise for Rex. He was rumored to have lost 5-10 pounds and we've been letting him roll out a lot more than we did before hand). 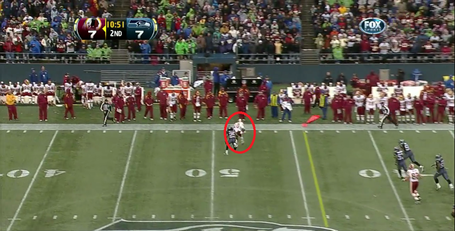 Gaffney makes the easy reception for a first down. Moving the chains and picking up a solid gain in the process.

You can then start to build into more elaborate play-action passes such as this one. 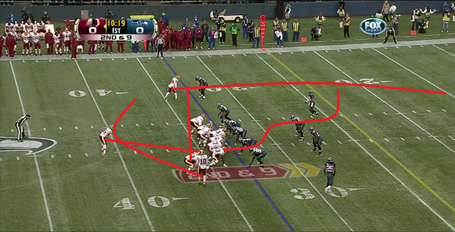 On this play-action, Grossman is going to fake the hand off to Helu and the end-around hand off to Gaffney. Meanwhile Moss is going to run a deep go/post route to occupy the single deep safety, opening up space in behind him for Davis to run into. 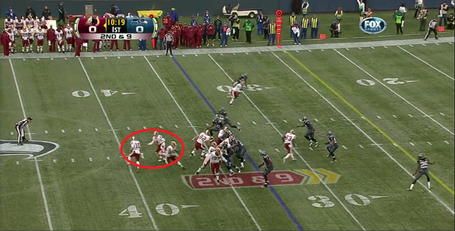 Once again, the play-fake draws in the linebackers, as they have to respect the run. 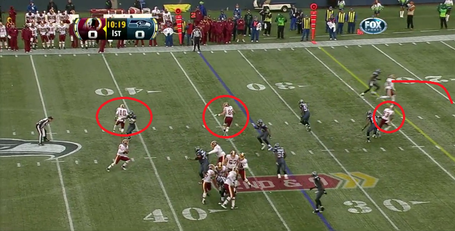 Gaffney's end-around delays a defender from going straight after Grossman. But when he's ready to throw, he can see that Davis is about to make his break outside and get open. He also had Logan Paulsen open in the flat should he have needed to check down. 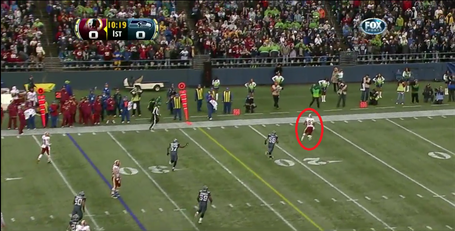 Davis makes the easy catch, with a ton of space to run into.

The play-action even works on the goal-line. 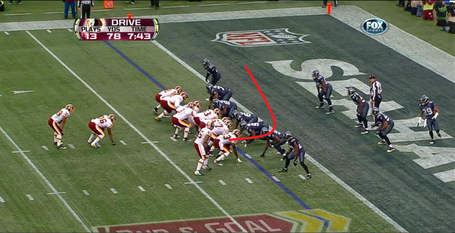 Quite a simple play design here. Seahawks are in zone coverage, so we're going to run Fred Davis on a quick crossing route underneath the zone. 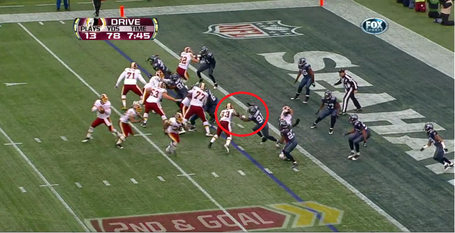 Davis starts by blocking for the play-fake. This makes the zone defenders think he's staying in to block, when actually he's running a route.

Because of that, Davis is unaccounted for by the defense. He gets open in the end-zone for another easy completion and a touchdown.

Once you've built the foundation of a run game and you're getting easy completions out of play-action, you can start taking the occasional deep shot. 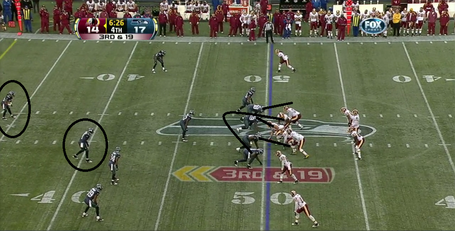 The Seahawks are actually running a little stunt here on the defensive line. Both the defensive tackles are going to attack the left side of the offensive line. The defensive end lined up over Brown is going to rush outside, pulling Brown away from Chester. The concept is to create a hole between the right guard and right tackle for the other defensive end to come around and have a free run into. Another thing to note is safeties. One safety is creeping up tot he line, giving away the single deep safety coverage scheme. 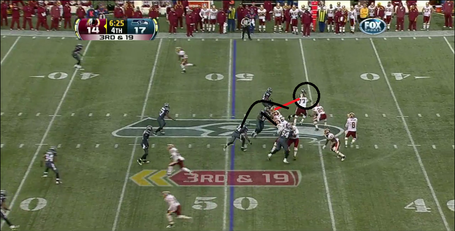 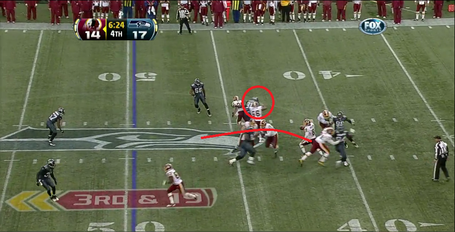 But Chester is aware enough to pass on the defensive tackle to Montgomery and Hurt, while he moves onto the defensive end, pushing him outside. The Seahawks do still manage to get pressure on Rex, forcing him to step up in the pocket, which he's able to do thanks to the hole opened by Chester. 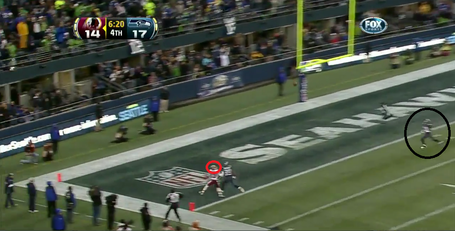 Grossman throws a deep bomb to Armstrong. The safety that was covering over the top was caught in the middle because of the go route on the far side by Moss, meaning Anthony Armstrong has one on one coverage. Armstrong gets his head around early and locates the ball before the defender. 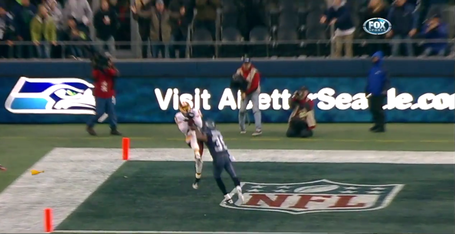 Armstrong makes a great adjustment to the ball and brings it in despite the cornerback's presence. (Is this the first time we've seen a Redskin come up with the ball on a deep throw from Rex?).

This is the sort of thing we're looking for from a Shanahan offense. Kyle called the game really well, with the play-action seemingly always hurting the Seahawks. It all comes from a solid run game. The switch to Helu as the feature back made up for some of the mistakes from the offensive line, which helped us established that run game. We went from there with the play-action and then the deep shots. It all works in together. Once we start connecting on a few deep shots, defenses will start to drop another safety back there, opening up more holes in the run game. I think this game just goes to show that when we execute, there is nothing wrong with this system or Kyle's play-calling.