Share All sharing options for: Looks Like Someone Has a Sixpack of the Mondays--Every Win Is a Good Win

1. I have to admit that I watch Redskins games at this time of year through a very different lens than I do in September. While I am tuned in and paying close attention, I am less likely to avoid other distractions during the game, and more likely to linger on the Red Zone channel if a compelling situation is developing elsewhere in the league. The lack of meaningful football in November and December takes its toll on a fanbase. We are not less passionate about our team because of it, but when there is little to play for except pride, fans have little to root for except respectability. Despite the six-game losing streak, the talk of draft position and the slew of injuries, this team has not stopped fighting. Mike Shanahan should get a great deal of credit for putting a group of men on the field that continues to challenge teams into the fourth quarter. We don't root for draft position, and we certainly don't root for losses. As I said last week in this space, winning games is what turns you into a winner.

2. The most updated NFC Playoff Picture still lists the Washington Redskins among the remaining teams "In the Hunt." Even the most ardent supporters of the burgundy and gold would be hard-pressed to mount an impassioned argument for our playoff legitimacy at this point. Our seven losses put us too deep in the hole. Even if we ran the table, we would likely find ourselves on the outside looking in. I hate to hang a season on one loss, but I wonder if we could hang our current predicament on one opponent: Dallas. Thinking about it is painful, but our two games against the Cowgirls were decided by a combined five points. The Redskins had opportunities to win both games. Wins in those two contests would leave us withsix wins and a winning record. We would still be on the outside looking in, but perhaps the proximity to playoff contention would elevate the play of our squad. It would certainly have changed the entire complexion of our experience this season. I have come to grips with the losses to Dallas this season, so don't interpret this as anything more than a desperate attempt to suggest that maybe we aren't as far away as it seems (it seems we are very far away).

3. In what I hope will become a regular component of Monday Sixpacks following road games, I am pleased to present this picture submitted by Hogs Haven reader Stephen Brobeck (brobot). He braved the elements along with a number of other fellow HH supporters--my boy Mike P. (Forestvillain--also pictured) sent text updates from his seat throughout the game. I know that we have fans in every city, so please send us your pictures from road tailgates or stadiums. 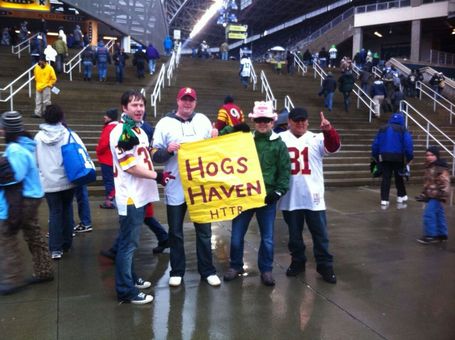 5. You have to love how Shanahan is giving Roy Helu the chance to be the featured back. Let's not quibble over how little choice we have in the matter, okay? Helu is getting maximum touches and is turning in some impressive results. Since we will spend most of the offseason arguing over who should be the starter in 2012, I thought I would frame up a slightly different debate: which round would you look for a running back in this year's draft? It is hard to imagine Shanahan not drafting a running back at all, but we have greater needs. I have to believe that Helu's success this season will prevent Shanny from using anything but a 7th round flier on a running back.

6. Parks and I have disagreed at times about Danny Smith. While I am not prepared to hang any individual failures on our most tenured coach, I will say that a change could be in the offing. I don't think you can fire Danny Smith for cause. I don't think you can call him a bad coach. In fact, if he is let go, I think he would be hired by another franchise extremely quickly. Why do I think he could be on the chopping block then? I see Mike Shanahan facing a great deal of pressure this offseason to change up his coaching staff, with Kyle Shahanan's name likely to be prominent on the tongues of fans and media members alike. Coach Danny Smith's removal could be a big enough story to take some heat off the family name. It could be true that he is one of our best coaches. It is probably true that most of the shenanigans that have ensued on special teams this year--as well as previous years--are not Smith's fault. But if change is unavoidable, look for Danny Smith to be on the hot seat. With an aging punter, a kicker who leads the league in misses and a returner who has not scored that was retained largely for his ability to score, it would seem our special teams unit could be an obvious target of change this offseason. I like Danny Smith and I am not advocating for his termination...but predicting this is not necessarily a stretch.