A new sponsor brings a new feature to Hogs Haven. With this new series, I'm going to look at the top 5 Redskins defensive plays for the week. I put the question out on Twitter to see what you guys thought were the top 5plays, but didn't get much of a response. So I'm going with the obvious. Luckily, the defense managed four sacks and forced a fumble. So lets have a look in chronological order.

Sack 1: Adam Carriker and Chris Neild. Situation: 2nd and 9 from the Redskins 25, 11:53 left in the second quarter 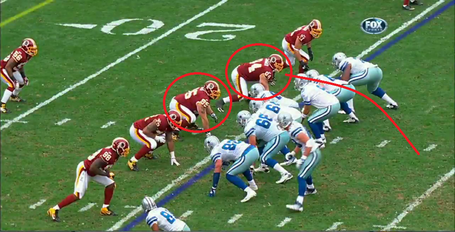 Carriker and Neild both draw one on one blocks in this five man rush. 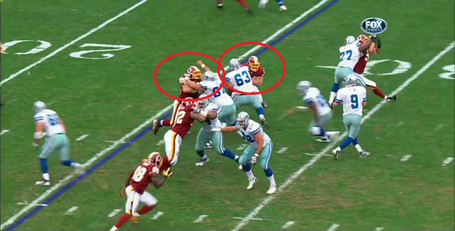 Carriker explodes off his block and is almost immediately past him. Neild gets himself in a good position, getting his arms under the center's pad level, giving him leverage and the ability to drive him backwards. 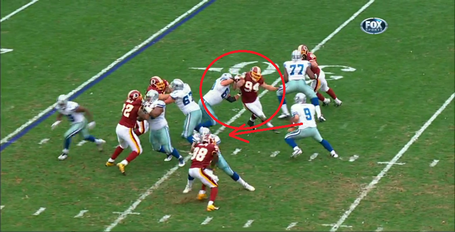 Carrike well and truly beats the right guard, who can only try and push Carriker past Tony Romo. With Carriker's presence in the backfield, Romo is forced to step up into the oncoming traffic of Neild and Stephen Bowen. 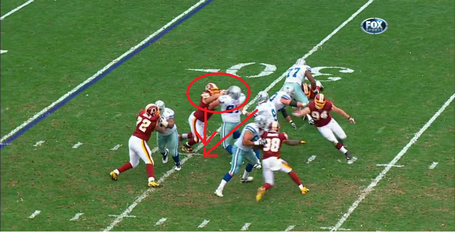 Neild continues to drive the center back towards Romo, who has little throwing room. He decides to scramble and attempts to get out of the remains of a broken pocket. 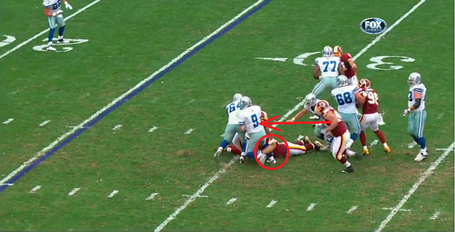 Neild does a good job of getting off his block and getting after Romo. He manages to reach out and wrap and arm around Romo's leg. 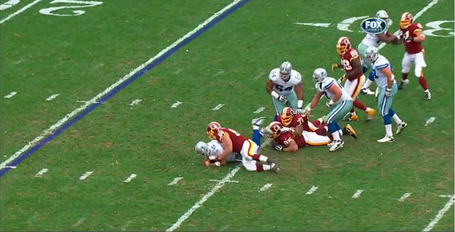 And just because we all love to see a Redskins Dlineman forcing a Cowboys QB to the ground, there's the pic of Carriker making sure Romo is down for a four yard loss. 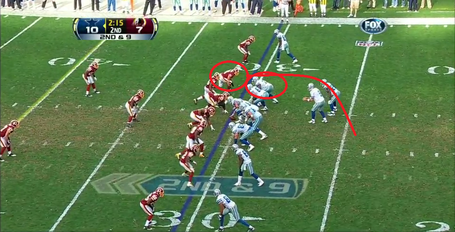 Ryan Kerrigan was a handful all day for rookie right tackle Tyron Smith. On this occasion he got the better of him on a standard rush. 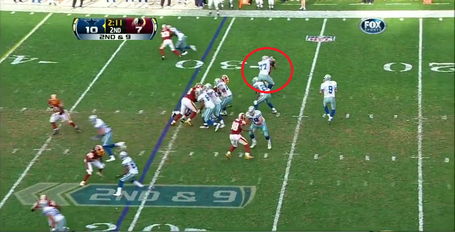 Smith comes out of his stance much too tall and when he initiates contact with Kerrigan, he's practically at full height while Kerrigan is completely under his pad level. 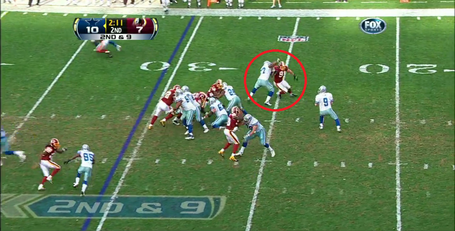 Kerrigan rips through Smiths arms and starts to get round the edge. 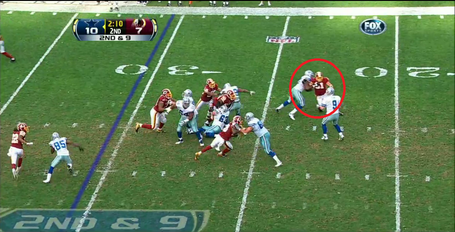 Smith recovers to an extent, but Kerrigan has gotten to much of an advantage. 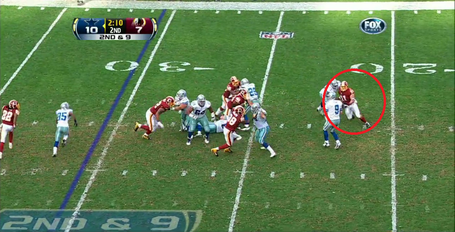 Kerrigan knocks off Smith's second attempt at the block and keeps his relentless motor going. 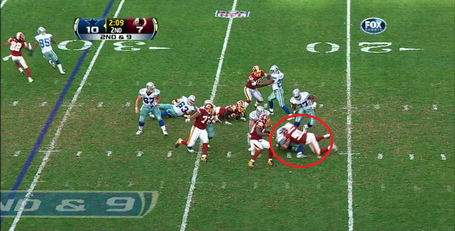 Romo attempts to keep sliding to his left, but Kerrigan gets to him and brings him down for a 8 yard loss. 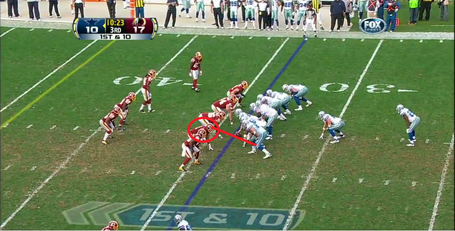 Bowen is going to attack left tackle Doug Free as Brian Orakpo drops into coverage on this play. 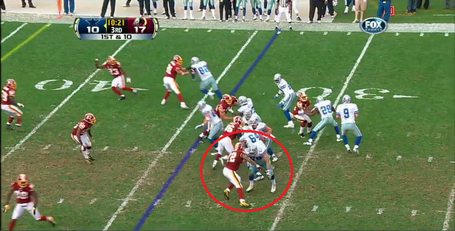 Free gets a good initial push on Bowen, who is forced back. 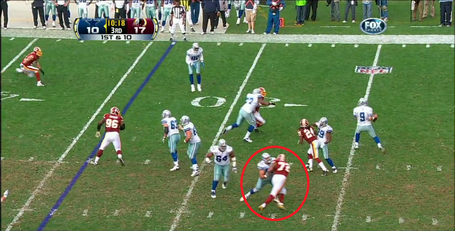 Bowen comes back with a bulls rush, then a club and swim move, nearly getting the better of Free. 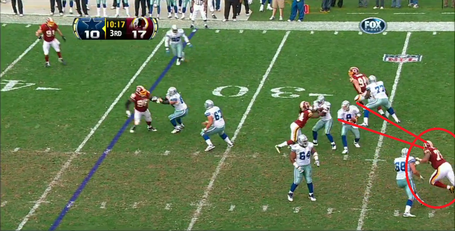 But Free manages to push Bowen off balance and far away from Romo. But Free makes the mistake of allowing Bowen to stay on his feet. Bowen quickly gets eyes for Romo. 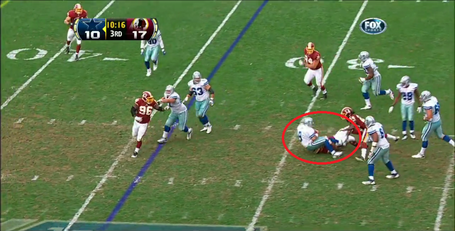 Bowen launches himself at Romo, bringing him down for a four yard loss on first down. 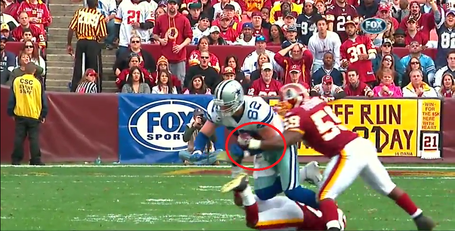 The next play on from the Bowen sack and Romo completes a pass to tight end Jason Witten. Witten gains about 10 yards on the play, but if Fletcher doesn't come in and punch the ball loose, Witten could have potentially dived for the first down. Fletcher brilliantly gets his hand directly on the ball. 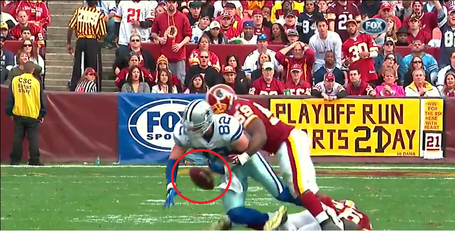 He forces the ball loose and Witten has to fight to recover and not turn the ball over. Witten recovers, but it stops the Cowboys three yards short of a first down, allowing for the next play to happen. 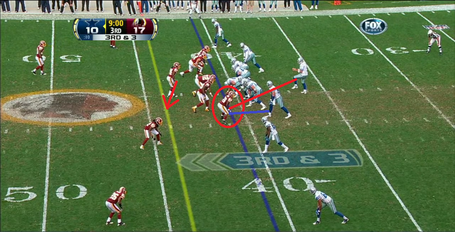 This is a really nice play design. We line Fletcher up over Witten, giving the appearance Fletcher is in man coverage with Witten. But in actual fact, safety DeJon Gomes is going to drop back out of the box to cover Witten, allowing Fletcher a run at Romo. 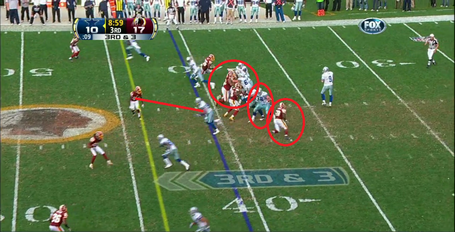 Free buys the fake completely, he initially goes inside to help block Orakpo before realizing that Fletcher has a free run on the outside. Gomes makes a perfect transition from up in the box to dropping back to cover Witten. 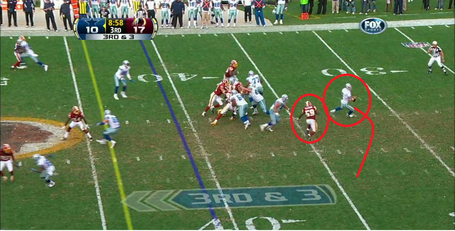 Romo decides to bail on the play and attempts to spin out and run for the first down. 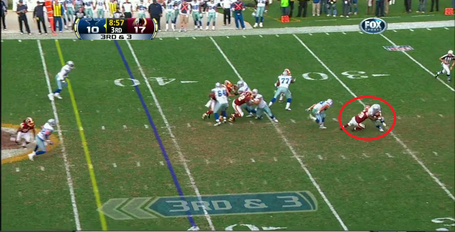 But Fletcher is much to good to miss this opportunity. He wraps up Romo before Romo has a chance to fully escape, bringing him down for a 12 yard loss.

So there you have it, our new feature. The top five defensive plays from the Redskins this week. Those last three plays resulted in the Cowboys having to punt, which Banks was able to field and bring back 55 yards and set us up for a field goal attempt (which Graham Gano missed).