Trent Williams vs DeMarcus Ware (and other Cowboys).

Share All sharing options for: Trent Williams vs DeMarcus Ware (and other Cowboys).

There's been a lot of talk recently about the possibility of moving 4th overall pick of the 2010 NFL Draft Trent Williams to the right side to play right tackle. Sure, he could play right tackle at an extremely high level (he played there in college) , but this would be a backwards step for the franchise in my opinion. To move Trent to the right side would mean we would have to spend big money on a free agent left tackle (and usually the good ones don't get to free agency) or we would have to draft one. Williams was drafted to play left tackle and he showed on Sunday against the best pass rusher in the league that he can be a dominant left tackle at the highest level.

DeMarcus Ware is and has been for the last few years the best pass rusher in the league. Williams went head to head with Ware and didn't allow a sack (Ware got a sack, but for that play he rushed against Jammal Brown on the right side). Back in September when we last played the Cowboys, I talked about how Trent appeared to struggle with Ware's inside moves. He looked much more poise and ready to deal with whatever Ware threw at him this time round. 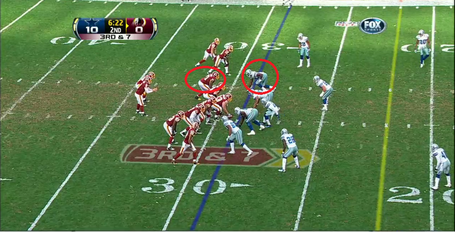 Ware has his hand in the dirt, lined up outside of Williams. 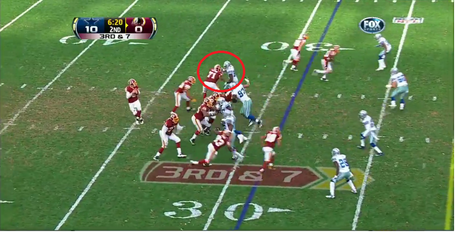 Ware rushes to Williams outside shoulder to create a gap between Williams and left guard Tyler Polumbus. 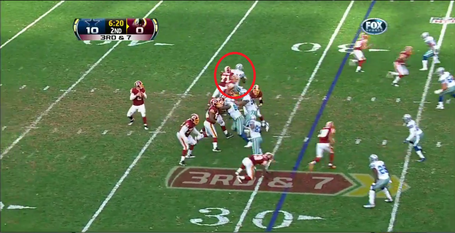 He tries to spin back inside, but Trent stays with him. 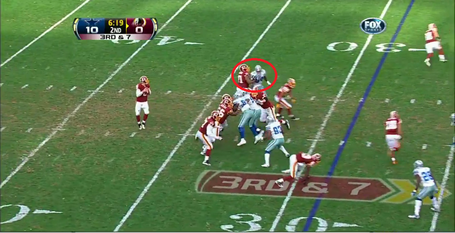 Trent still has control of the block as Ware comes out of his spin move. 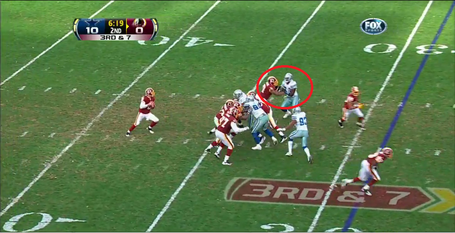 Williams then takes advantage of Ware having to regain balance after the spin move and get a strong punch into Ware's chest. Rex Grossman gets rid of the ball soon after, with Ware nowhere near him.

With Williams having blocked Ware effectively for nearly a half, the Cowboys move Ware over to the right side to see if he gets any better success there. This matches up defensive end Jason Hatcher with Trent. 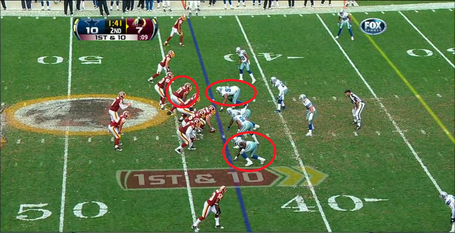 Ware is circled at the bottom of the screen away from Williams, who has Hatcher lined up across from him. 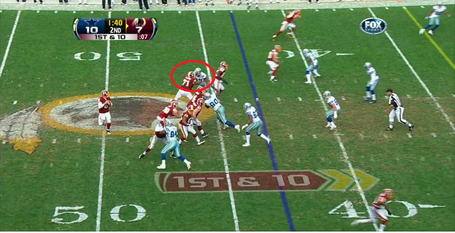 Hatcher attempts a club and swim move (when you club the blockers outside arm and use your other arm in a swimming motion to get past him) He goes to club Williams here, but with no success. 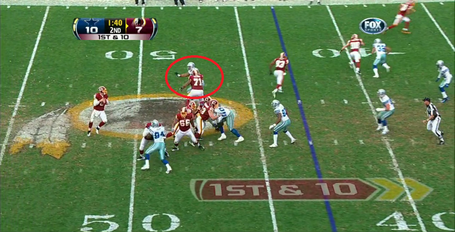 Williams ends up getting a good punch in, sending Hatcher off balance and away from Grossman. 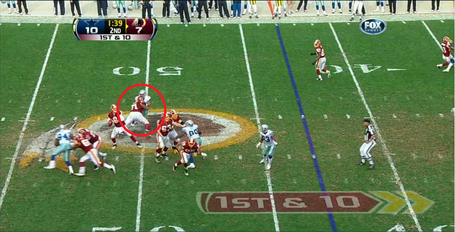 Hatcher comes back with a bull rush, but Williams gets himself low and under his pad level which enables him to withstand the power rush attempt. No troubles here for Trent.

Just before the end of the half, the Cowboys send Ware back to the left side to try his luck against Trent again. 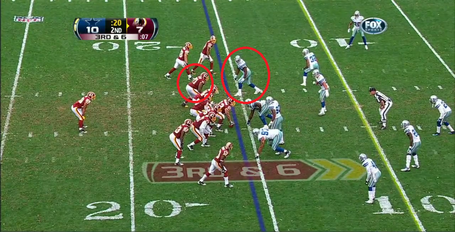 On this play, Ware nearly manages to get past Williams. 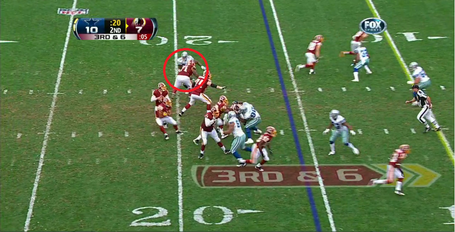 Ware clubs Williams arm down, not allowing Trent to lay hands on him. 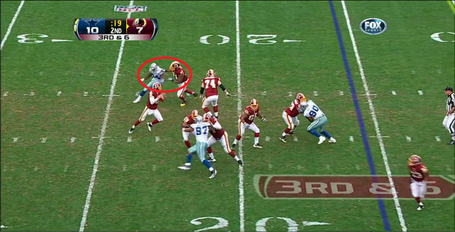 This means that Ware gets past Williams and gets to the edge. He's nearly ready to make a run at Rex, but Trent recovers to the point that he'll be able to push over the delicately balanced Ware, or at least be able to push him past Grossman as Rex steps up in the pocket. 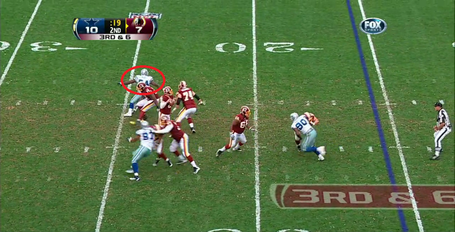 This forces Ware to spin back inside. 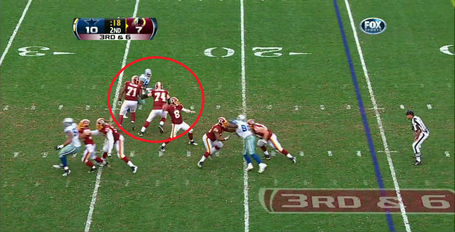 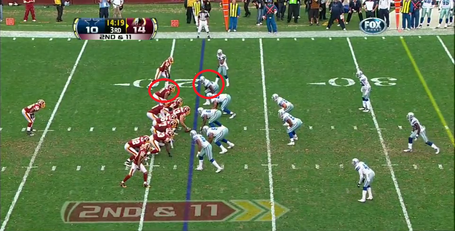 Trent is up against Ware one on one again. 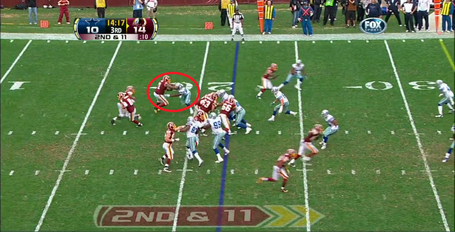 Ware takes Williams outside before cutting back inside. He gets ahead of Trent. 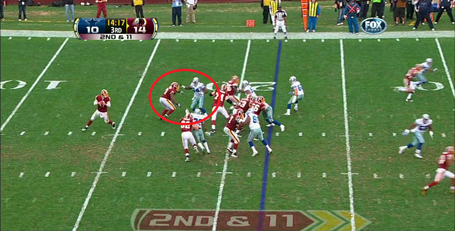 But Trent recovers and gets himself between Ware and Grossman. 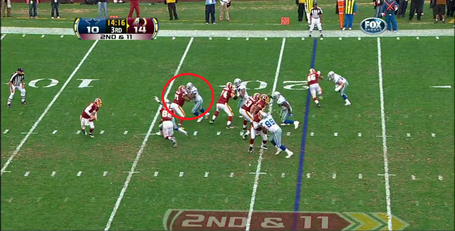 Ware decides to bull rush Williams back, they lock arms and its purely power against power. 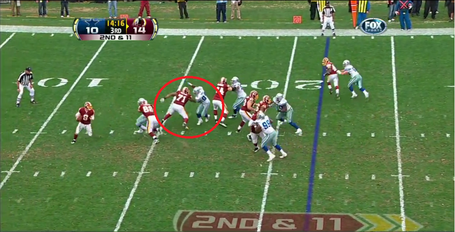 Ware manages to swim out of the block from Williams and goes straight after Rex. But Trent managed to hold the block for long enough, as Grossman gets the pass off before Ware can get there.

One last block to show you, it's another bull rush attempt from Ware. 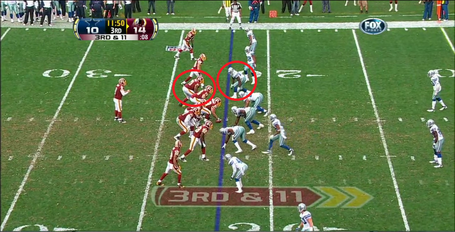 Ware is in his two point stance, rather than hand in the dirt. 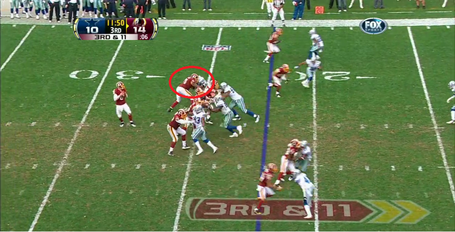 They both fight to get their pad level lower than the other. Ware gets his pads slightly lower than Williams and gets the leverage. 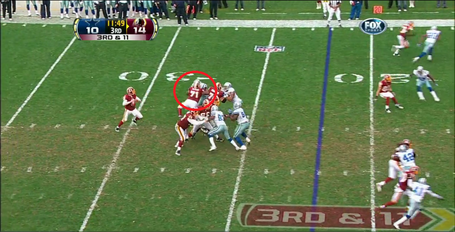 Trent recovers (think I've used that word too much...) again and gets his pad level under Ware's after being pushed back. He starts to put a stop to Ware's bull rush. 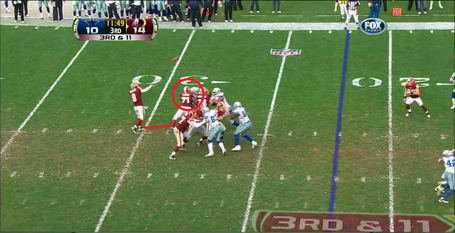 In the end, Rex manages to get the throw off cleanly with roughly a yard of space from Williams and Ware, which is all you need.

Williams had a great game, one of his best as a pass-protector for the Redskins. His run blocking is his strength, but it's tough to run his way with a seemingly new left guard every week. The only negative I can pick out of this game from Trent was this holding penalty: 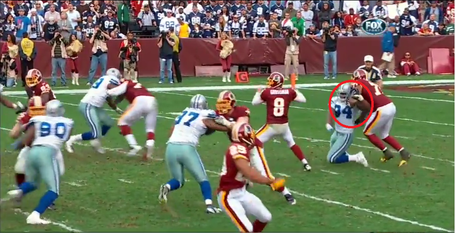 It was the only rush that Ware managed to get fully around the outside of Williams. Trent hooked Ware's shoulder with his arm. I can see why it was called a holding penalty, but when you look at this picture: 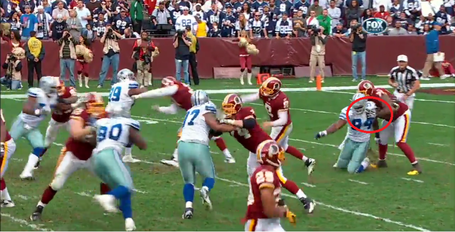 Trent's hand isn't actually holding onto anything, it's just on Ware. Again, I can see why it was called holding, but I'm not so sure that it was. Either way, for this to be the only negative play for Trent when he spent most of the day up against DeMarcus Ware, it's a pretty good game for Trent. If he can go head-to-head with the best pass-rusher in the league and come out of the game having played this well, then he can be a very good left tackle in this league. So can we please stop with the chat about moving him to the right side?