Bored again tonight? Well the MAC attack continues on ESPN and ESPN2 at 8PM. Ohio (7-3) takes on Bowling Green (4-6) on ESPN, and Western Michigan (5-5) visits Miami (OH) (4-6). To be perfectly honest, there are nearly no pro prospects in these two games. But there is one in particular the Redskins should keep their eye on in regards to the 2012 draft and that's 6'5, 345 lbs offensive lineman Brandon Brooks of Miami.

Strengths: Brooks' biggest asset is his versatility. At Miami he's played nearly every position on the offensive line and has been good at all. In terms of the NFL he's likely a guard prospect. Brooks also has a very strong base and can power defenders off the line, if you're looking to install a power run game then this is the type of guy you want. For his size he's very athletic and was even all-state in basketball in high school. 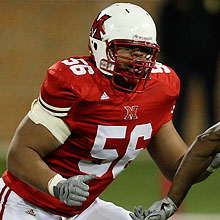 Weaknesses: Brooks has been riddled by injuries the past couple of years and his weight has also been an issue. He also has trouble with lateral movement and adjusting to finesse moves by members of the defensive line.

Projected Draft Round: Brooks is likely to go in the 6th to 7th round because of his injury and weight concerns. But he does have the skills to be a starter in the NFL. At the very least he could provide a versatile backup that could play both guard and tackle.