Should we be worried that the Redskins are 0-7 against rookie QB's recently?

Share All sharing options for: Should we be worried that the Redskins are 0-7 against rookie QB's recently?

For those who didn't know, the Redskins loss to the Cam Newton lead Panthers at the weekend left the Redskins 0-7 in their last 7 games against rookie QBs.

There's a good debate on Twitter between @BurgundyBlog, @Matt_Terl and @ToBurgundyTears over this stat. It started with @BurgundyBlog saying this:

This rookie QB streak is seriously the most damning statistic I can remember, about any NFL franchise, ever. Absolutely mind-boggling.

So my question to you is, should we be worried about this? @BurgundyBlog makes a good point in that it shows the Redskins are losing to teams that were bad enough to draft QB's in a position to start in their rookie year (i.e. 1st round QBs, more specifically top 10 picks). He mentions how they are raw on-field leaders and that teams that were that bad should be getting beat.

I'm not so sure. Teams that are drafting top 10 get top 10 picks in each round. The Lions are a perfect example of this. The year they drafted Stafford, they managed to secure an extra 1st round pick, which they used on TE Brandon Pettigrew. They used their second round pick was on Safety Louis Delmas. That's 3 quality starts to build around previous drafts. Drafting so high, is going to get you potentially 3-4 starters. Plus you can entice free agents with the attraction of playing with a young franchise QB that everyone desires. Just because they drafted a QB high, doesn't mean they can't be a good team. Bradford took the Rams from 1-15 to 7-9 and nearly to the playoffs in his first year.

For me, if you draft a QB, especially at number 1 overall (which the last 3 rookie QB's we've lost to have been) you're expecting him to instantly take a leadership role and win you games. After all, it's a QB driven league, you need a franchise QB to stand a chance of winning a Super Bowl. I don't understand why a rookie QB shouldn't be successful just because he's young.

The last 4 rookie QB's we've gone up against (Joe Flacco, Matthew Stafford, Sam Bradford and Cam Newton) have proven to be pretty damn good at their position. So, in my opinion, it's just like going up against a rookie WR like a Calvin Johnson type that you just can't cover, or a rookie pass-rusher like a DeMarcus Ware type that you just can't block. They get drafted that high for a reason. They are meant to be good players, and good players will win games particularly at QB where they have the ability to lift the whole team.

I mean, just because Cam Newton is a rookie, doesn't take away from his ability to make this throw: 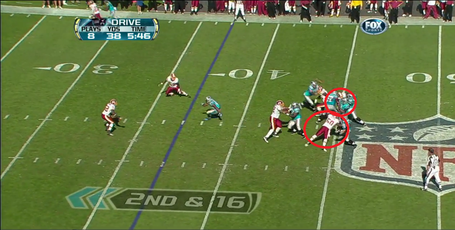 Newton has to throw off his back-foot because of the pressure from Rob Jackson. 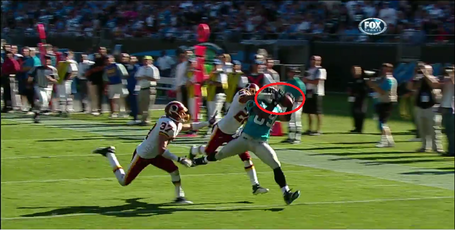 but he still manages to put a perfect throw into Steve Smith's arms, just out of the reach of Josh Wilson. This throw shows that some QB's can just make people around them better, or make up for their mistakes. The pressure is just cancelled out as Newton has the ability to throw this bomb off his back-foot, making up for his Oline not giving him a lot of time. He puts the ball only where the WR can catch it, meaning the WR doesn't have to do as much to get open (although in this case, Steve Smith is a pretty damn good WR). When a QB can do this, he can change a game.

So what do you think? Am I being stupid and @BurgundyBlog right that this is a horrible stat that means we're losing to really bad teams?