Man, Al Davis really canned Tom Cable? The Raiders were an impressive 8-8 team this year and really looked to be building something. Cable joined Oakland in 2007 as the OL Coach and took over as the Skipper when Lane Kiffin was canned. Cable and Hue Jackson had the stats to validate their 3-win improvement from 2009 on both sides of the ball:

We are talking about Al Davis though. He's had a quick trigger dating back to when he decided to chose a Head Coach for the first time out of the organization....Mike Shanahan.

In the 1988 season, Shanahan was sitting pretty at 7-7 with two games left in a weak division that year. Mike lost the final two games of the season killing their post-season chances. Fans and Al Davis were short-tempered (sound familiar??) in 1989, after a home opener win vs the Bolts, Shanahan lost his next 3 games, was given the pink slip, and Art Shell was promoted to Head Coach. 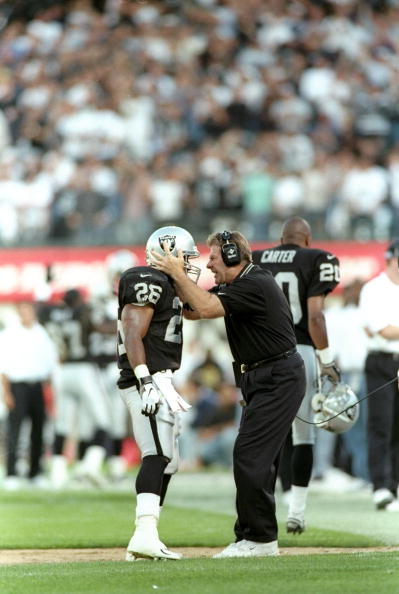 Then of course there was the single season Joe Bugel was the Head Coach of Oakland and subsequently canned:

-- Sept. 6, '98 -- In front of 78,945 spectators and a national television audience, the Raiders disintegrate in Gruden's first game, losing 28-8 at Kansas City. They give up five fumbles and 10 sacks, committing 15 penalties. (Gruden not fired, shockingly).

Gruden's first year in 1998 they finished 8-8 after most journalists had predicted 6-10.

A funny tidbit regarding the Shanahan firing:

Shanahan was owed $250K of salary after Al Davis fired him. Davis told Shanahan he could go to any team but Denver if he wanted to receive that payment. Mike of course told Al, "You're firing me. I should be able go where ever I want." Mike went to Denver and Shanahan has still to this day not received that money.