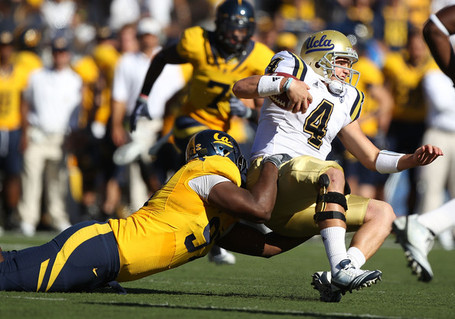 Cameron Jordan is definitely a prospect for the Redskins to keep their eyes on during this week's Senior Bowl. He's a 6'4, 290 lbs defensive lineman, who would make a great defensive end in the 3-4 defense.

Pros
From all accounts Jordan is extremely smart in recognizing offensive schemes and attacking based on the adjustments he makes. He's very agile and more of a power rusher off the end, what he lacks in speed he makes up for in technique. He has very long arms that he uses to plug the passing lanes and is very active with his hands. He is a very hard worker and only has missed one game out of the 38 he has played in over the course of his college career.

Cameron's dad, Steve Jordan, was a 6 time Pro Bowl Tight End for the Vikings and played in the league from 1982-1994, out of Brown University.

Cons
Needs to get better producing sacks and continue to work on speed. He was also suspended one game this year for an arrest on suspicion of DUI.

Projected Pick: Top 10-15, He could be a perfect defensive pick for the Redskins at #10 and should be evaluated with the likes of Ryan Kerrigan and Von Miller at that spot.