What Is Your Best Big Game Party Story?

Share All sharing options for: What Is Your Best Big Game Party Story?

Now that I'm a little older I definitely am a little more picky about going to Super Bowl parties. I'm not driving 20 minutes to some house to get stuck sitting on a bar stool 12 arm lengths from any food.

I've had the fortune of attending two Super Bowls in person (my own dime) and most likely will go to Dallas this year (how can I not with a free ticket on points and a friend that lives there)? With a 110K person stadium, scalping can't be that difficult, especially since my friend and I were able to scalp face value tickets to the Saints/Colts game in Miami last year outside the stadium. As for the parties, my top 3 were:

3.) DC101 Super Bowl Bash: Four of us went to Elliot's bash five or so years ago at Dream (massive club in SE DC now called 'Love'). On a normal night, the place has metal detectors to get in. This was quite a scene. 3-story place with beer bucket girls everywhere and an equal mix of local SE Washingtonians and the hillbilly folks from Eastern, MD. We scored a table on the heated roof in front of the big screens and I only remember two things. 1.) My friend Jim getting to 3rd base with a 45-year old woman in one of the stair wells. 2.) Walking out of the place seeing a girl crying in her boyfriend's lap as he repeatedly punched her in the back. I went running up there, he pushed her off, stood at me, and said "What are you going to do about it?" Hmm, this white trash guy was tatted up and larger than me, so I looked to my left, saw a massive bouncer, and waived him over. No joke, they dragged the guy out back and beat the hell out of him. The manager of Dream came over and gave me his cell number for instant VIP access any night. Um, yea. "Thanks but no thanks." Great time otherwise and some band that was awesome 5 years earlier played halftime. Puddle of Mudd I think. 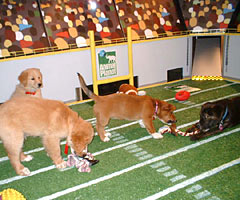 2.) Party at my house: My old apartment in Logan Circle was the ultimate bachelor pad. Full bar, beruit table, two TVs, 3 video game systems, dart board, kegerator, and lots of space. We had a big party there the year the Steelers beat the Seahawks, nothing more crazy than the next one. I personally enjoyed this party because no one knew I had the remote and every 5 minutes or so I would hit the "Last" button which would flip over to the Puppy Bowl on the Animal Planet. Oh man...the 15 or so people would go ballistic. Of course, I led the charge in cheers blaming my roommate Paul but this went on for two quarters before people figured it out. The Kitty Halftime show is still a big joke.

1.) Mothers Bar, Baltimore MD: My friend rented out the entire upstairs and brought in beruit, craps, and blackjack tables. We partied and gambled up there from 12-6 before the big game. Girls of course were allowed up free and guys had to pay $20. The only thing I remember from this day is Janet Jackson's nipple and two of my friends losing over $1500 each in Blackjack.

Truly, my best stories are flying to the Super Bowl cities and partying around the stadium (unfortunately nsfw or nsfsbnation). It's actually relatively cheap if you do it right. What's your best Super Bowl story?