As we did last week, we chat it up with former Miss DC 2009, Jennifer Corey, to talk some Redskins. With a tough road game at Philly, I'm grasping for any Redskins Kool-Aid I can get my hands on. As rowdy as Philly fans can be, Jen can hold her own. If you recall, earlier this year, Jen made headlines when she slammed a dude against the wall for being all touchy-feely (after several other tried as well). Ken Meringolo...where were you the night of May 22nd this year? Back to football...

Kevin: Being your first year as a die-hard Redskins fan, you now got to experience what us life-long fans have experienced the last 10 years...a horrible loss to a pathetic team. What were your reactions during the game and after the game?

Jen: I went to the bar to watch the game in my new jersey all wide-eyed and hopeful for a win. Unfortunately some other group at the bar had the bright idea to turn the Eagles game on in the same room. So while they were hoopin' and hollering, we sat quiet. Not so good for the ego. And it was not making us feel any better about the next game. We actually left to go home before it ended. I just couldn't take it any more.

The Redskins said the Eagles game is a must-win...how do you see this game playing out for our defense and offense?

Jen: I'm not going to lie, I'm a little nervous. Our defense needs some work, and we've been squeaking by with a pretty good offense. I'm anxious to see McNabb back in Philly. If things go wrong, I'm not sure our defense can hold us. But on the other hand, I have faith in McNabb. He's a great player with a lot of experience and he's there to get the job done.

You grew up on Long Island but surely have had to cross paths with Philadelphia at some point over the years, one of our most heated rivals. You're on a committee "Let's Talk Trash," to support recycling...what trash talk can you give to Eagles fans this week??

Jen: Haha yes, my platform for Miss America was called "Let's Talk Trash", which promoted recycling. As an Italian girl who grew up on Long Island, I can promise you that trash talking is something which comes naturally to me. But since I've moved to DC, I've tried to be a little nicer, so I will not bring up anything about the fact that their QB is a murderer. But I will bring up how awesome it is that an organization is donating a bag of dog food every time Vick gets sacked.

As we do each week...we'll end on a Miss America-style question...."If you could end world hunger, create world peace, or bring a Super Bowl to Washington DC....how would you rank them and why?"

Jen: Ok, First I would end world hunger because no one deserves to be hungry! Then second I would get a Super Bowl for the Redskins. We have to end world hunger first so no one is hungry during the game. Then third, world peace. Once people are fed and the Redskins have won, is there really any reason to fight?

I'm sure Philly fans will find one. 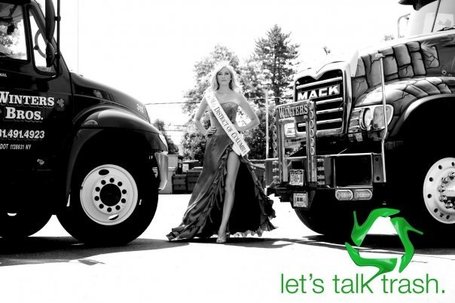 Here's a pic Jen sent me a couple weeks ago from the Ravens pre-season game...forgot to include that last week with our first post. That's coincidentally Miss Maryland, Brooke Poklemba, on the right. 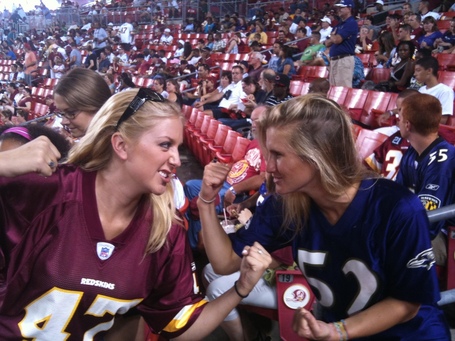