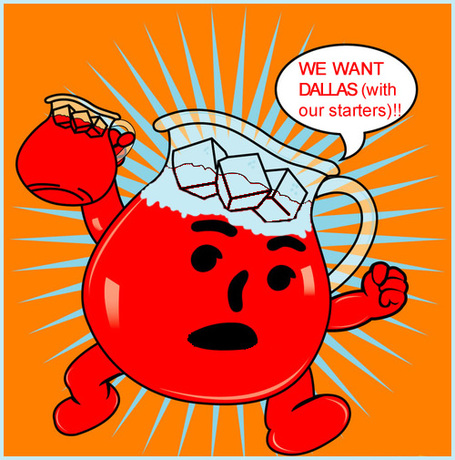 If the creators of the Bad News Bears were looking to make a football movie, they should start with footage from last night's game. The Skins had a whopping 12 penalties for 110 yards, multiple fumbles, and late conditioning woes. We all knew this would be an ugly game with fumbles and false starts, but I didn't expect the backups to be THAT inconsistent. Does anyone feel as shaky at the backup QB position as I do? Beck channeled his inner Colt Brennan throwing side arm balls with little step. All this stuff can be corrected, so no need to over-react there. It certainly doesn't look good on the stat sheet that Beck's QB rating was 52.1 while Bartel registered a 127.7 on 12/14 completions. Let's not start a 3rd string QB controversy and instead focus on the bubble.

Robert Henson definitely makes the All Kool Aid Team. 7 tackles, 1 sack, (and 2 penalties). He was slicing and dicing and seemed to be involved in every tackle. Devin Thomas played well, but it's clear what coaches mean when they say he's inconsistent. I don't see how he doesn't make this team. He averaged 27.5 yards on his 4 kick returns, which is 5 yards higher than Rock Cartwright's average. I think it's safe to ink him in as the starting kick returner.

Brandon Banks is essentially the 2009 Anthony Alridge. Blazing speed with a stage 5 case of fumbilitis. Outlook? 24 hours to live. We all wanted Banks to make this team, but would you honestly want him back fielding punts against Dallas??? Hell no. I'm not opposed to adding Banks to the practice squad.

And that brings us to the $100 million man, who played 49 of the 55 defensive plays and registered 4 tackles. Shanahan said post game:

I kept a pretty stern eye on Haynesworth and he had a consistency to him. On the first 2-3 plays of a new defensive drive, the former Titan would show strength and push. After that, it was a lot of standing around and almost no running, which is going to look really bad on film. Last year, all Haynesworth had to do was lie down or take a knee, and coaches came out with the palm fans and grapes. Notice a difference this year? No taking a knee. No lying around. He was bent over at times, but the days of not fighting through it are over. I guess it's a good sign that's he trying some. Baby steps?

It's estimated by the Comcast broadcast last night the Redskins will carry the following numbers (and I filled out the players):

Notice a problem there? Where are the full backs??? Ideally we'd only want to carry 1 FB, so let's assume that happens with Sellers and either Torain or Williams goes on Practice Squad. Take away 1 CB spot and carry 5 to make room for the FB. I think they could drop a LB as well and add another FB or Safety, who also can be a solid special teamer (Tyrone Carter or Carey Davis).

Coaches said they're still in flux on a few position spots, so I'm looking forward to Saturday. I'd be surprised if the Redskins didn't make a move on a WR once NFL cuts happen.