Redskins Show their Offense, Defense, & STs are Balanced - In That They're All Terrible

Share All sharing options for: Redskins Show their Offense, Defense, & STs are Balanced - In That They're All Terrible 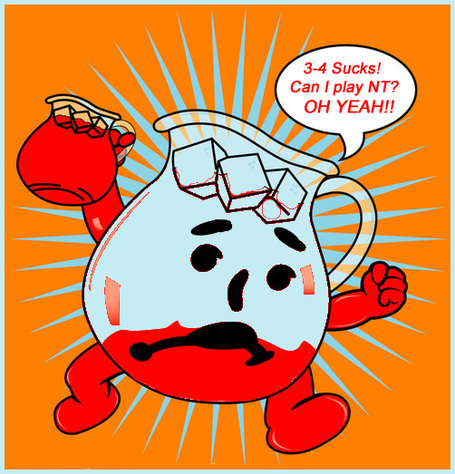 I'm catching a lot of flak for my earlier prediction that the Rams were essentially a BYE week. Fair enough. Geez, even my 7-9 prediction isn't looking good at this point.Who would have ever thought ball-busters like Shanahan and Haslett would have their team as under-prepared as this? In our show, I highlighted that's it's not a BYE week for the players and coaches, but for the fans. There's a reason the Rams are consistently in last place with a horrible defense. Any game plan and coaching staff should be able to prepare their team for a win - especially when the Rams top play makers on both sides of the ball go down early with injuries (Steven Jackson and OJ Atogwe).

Well, it's clear the Redskins coaches never showed up. It was equally discouraging to hear the players say as much. Haynesworth post game:

"We didn't focus. We kind of expected, this is the Rams, we'll come in and beat them."

AHH, Christ. Really, guys? It seriously looked like the Redskins never even put a game plan together. Steven Jackson running wild, Andre Carter in coverage, the blocked punt, DeAngelo Hall consistently looking lost, the fumbles, the missed tackles. The Redskins went into halftime knowing Jackson was out and Bradford's game of throwing short passes, yet no adjustments were made. The Redskins were the 32nd ranked D against two great offenses weeks 1-2, and they're the 32nd ranked defense (still) against one of the worst offenses in the NFL.  The Rams lost their starting RB and WR, yet they still moved the ball with ease.  The Rams were 7-16 on 3rd down conversions while the Redskins were 1-10 (0-3 red zone). Same story - different week.

The Special teams unit continues to be an utter disaster. Both Reed Doughty and Keiland Williams missed blocks for the streaking Rams defender that got to Gano. I thought blocked punts only happened to terrible teams like the Lions? Ah crap, we're now that terrible team. I was at the Redskins Luncheon when Mike Shanahan said he did not inherit a 4-12 team because" there's too much character on this team." It's true this team has character, but focus is another thing.

The 3-4 experiment needs to end. As much as we've all hated Greg Blache's defense, it was a top-5 defense that always kept the Redskins in games late. When the Rams have the ball for almost 10 more minutes of the game, something needs to change. The Nose Tackle position is laughable. Have you noticed the line of scrimmage gets pushed back 2-3 yards every play in the middle? Guards were pulling in to the secondary untouched. London Fletcher is essentially being taken out of the game due to the front 3 woes. On top of that, Kareem Moore had missed tackles on those 2 rushing touchdowns. Did you know the Rams had not had a rushing touchdown in 7 straight games? Yeah, and they got TWO against the Redskins.

Moving to the offense side, there's plenty of blame to go around. Why is Devin Thomas still on the bench? Roydell Williams? Really? It's painful to watch him out there. The only successful things the Redskins can run are misdirection plays. I was amazed to see the Rams fall so hard for it on the Moss TD, after the Redskins ran a gillion of them vs the Texans, but it's safe to say the Eagles will not.

Like all Redskins fans, I was furious to see Portis fall down untouched on that long run. I suspect that's why he was benched, but Shanahan said post-game it was in the plan all along to have Torain run the ball more second half and have Portis block 3rd downs. Bold faced lie. On that key 3rd and long play, Torain was the blocker and completely whiffed on a streaking rusher...play was then busted up. It's maddening to see Shanahan's ego overtake simple logic. How bad is the Redskins running game, Rich Campbell spelled it out:

Redskins were 1-for-10 on third-down attempts. Their AVERAGE distance to-go on third down was 8.7 yards. That's not manageable. Half of their third downs required 10 yards or more. Only two were shorter than 7 yards.

The second half the Redskins had 5 rushes for 1 yard. That is their lowest rushing total for a half in their history. If the Redskins can't get it going against the lowly Rams, they have no chance against the Eagles and Packers' defense.

Haslett, Shanahan, and Danny Smith lost this game. I'm used to dealing with a struggling offense, especially one that was over-hauled like this. However, the defense is another story since it's always been solid. It's practically the exact same roster as last year, yet they can't cover or tackle anyone all of a sudden. If the Redskins can't tackle no namers on the Rams roster, how are they possibly going to deal with bringing down Michael Vick, DeSean Jackson, and LeSean McCoy? We used to be able to say we play to the level of our competition, but they couldn't even do that with the Rams. Cooley said it best post-game, "They kicked our asses."