After meeting the lovely Miss District 2009, Jennifer Corey, at the Sneaker Ball the other night, it was clear she had a  lot of passion for the Redskins when I did a brief, video interview. I asked if she wanted to share that love in a weekly Q&A throughout the season, and she graciously accepted. This week she talks about the Texans and upcoming Rams games. Without further ado...

Let's do a brief introduction - What's your background and what keeps you busy these days?

I'm a 23 year old, American University graduate with a degree in Opera Performance. I grew up in Long Island, New York and was raised to by two Jets fans. My dad is more of a hockey/baseball fan, while my mom is actually the die hard football fan in the house. I was crowned Miss District of Columbia 2009 and was in the top 10 at Miss America. Since my reign, I'm now the Youth Programs Manager for the Food Allergy and Anaphylaxis Network working with kids with life threatening food allergies. During my year as Miss DC, I got to sing the anthem at the Sneaker Ball last year where I met former player Darryl Pounds. I also met Clarence Vaughn at an appear ance and asked to trade his Super Bowl ring for my crown. He shot me down, but he let me try it on. {photo attached} My boyfriend is from Potomac and his been a life long Redskins fan and season ticket holder. I love football so I was excited to go with him to the game. I've always liked the Redskins, but now I'm officially hooked!

How lucky are you that you didn't have to suffer through the last ten two years? I noticed you were at Week 1 (Dallas) but did not go to the game vs the Texans. What in Dear Lord's name was more important? Is it safe to blame you for the loss?

Ok not my fault. I used to work for the Washington National Opera and it happened to be the same day as the opening to the opera season. The performance started at 2 while the game was at 4. I stayed for the first 2 acts of the opera and then drove to my boyfriend's parents house (he was at the game of course) and watched with them. But if it makes you feel better to blame me rather then our sleeping defensive line, then go ahead. 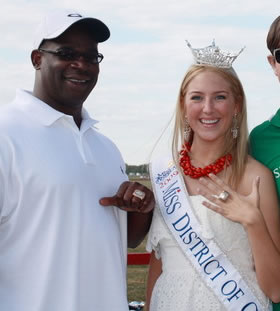 It does make me feel better blaming you...not sure why, so I'll roll with it. There were a lot of negatives and positives that came out of the loss to the Texans...what stands out to you about this team that is encouraging going into St. Louis?

Definitely McNabb. The fact that he threw for over 400 yards on Sunday with 1 TD and no interceptions is very encouraging. The entire offensive line is looking promising, which I think is a direct reflection on the work they've put in tightening up the offense and working with Trent Williams.

Softball time...Who's your favorite player and why?

I guess it's a tie between the girliest answer, Chris Cooley, and Brian Orakpo.  I like Cooley's blog and how he connects with his fans. Orakpo just seems to have so much potential and I can't wait to watch him this season.

And now for my Miss America-style question...if you could make one improvement to this team (whether it be with the personnel/roster or Fedex Field, etc), what would it be?

I think I would choose to add a Super Bowl XLIV Championship banner to our stadium! How great would it be to play/win the Super Bowl in the Cowboys home stadium?!

Pretty damn, great. Talk to you next week and thanks as always. Feel free to follow her on twitter @MissDC2009.