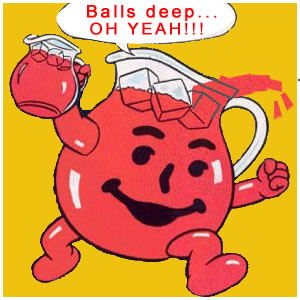 Do you know how many times McNabb has thrown 2 passes in a game for 60+ yards in his career?
Once. This past Sunday.

There's a reason I don't do this post the night of the games - simply put - emotions are still running too high. Walking out of Fedex Sunday night brought back too many memories of 2009...injuries, missed FGs, heart-breaking loss...but with sobriety comes vision (usually). In the post game tailgate, after drinking some Coors Lights to sober up, several things popped to mind talking with friends, which are the mains reasons the Kool-Aid is still full (the only spillage being the injuries to Landry and Trent Williams). I do find it odd that the win over Dallas was one we should have lost and the loss over the Texans is one we should have won. The positives:

Remember all that pre-season talk from players that fans would be "Wow'd"...guess they weren't kidding. With the way Shanahan and McNabb stretched the field, the Rams defenders will have to play back and the running game as a result should open up. Yea, the running game still stinks, but who says you have to run it? (ask Manning, Andy Reid, Tom Brady, or Drew Brees)? As the Redskins deal with some early bruises, it's nice they have a break in their ridiculous schedule to deal with the Rams...statistically one of the worst play-action and rushing defenses last year. (Is there a name for baby Rams because using that term applies here on out). Ken and I got in a heated debate filming Redskins Lunchbox last night (that will air on Wednesday) whether the Rams are considered a BYE week. I think they are (which I'll lay out in my next post). I know the last 2 games were close or a loss, but Zorn was the sole reason we lost those games. Ken then went on to predict the Redskins win 35-10. WTF?

I left this part after the jump, but the drop-off in the quality of backups is worse than I thought (and I thought the worst). When Trent Williams went out, Stephon Heyer channeled his inner Alex Barron pulling out the clothes-line hold. The Redskins were already backed up and it was a dagger of a penalty to take on a 3rd down play. The Football Outsiders highlighted how the Redskins changed their offense when Heyer came in:

@FO_BBarnwell: Redskins are throwing slants because they're afraid of letting McNabb take any sort of drop with Heyer at LT.

When I spoke with Heyer at the Redskins Luncheon 3 weeks ago, I asked him why he looked better this pre-season (all his action was at Right Tackle). He said it's been extremely helpful to only have to focus on one position unlike last year. Hmm, yet he's the backup LT? Fail.

The mental mistakes for the injury subs (Horton - offsides), (LJ-running backwards), and Keiland Williams (failing to stay in bounds) we simply have to let slide. It's week 2 with a new staff and these guys are being rotated in so rarely. I expect players to learn from film this week.

On a side note, if the game does come down to a FG attempt again...do you think Shanahan ices the kicker? I put my money on yes.