Redskins Do What Wizards Can't; Send LeBron James Home from DC a Loser

Share All sharing options for: Redskins Do What Wizards Can't; Send LeBron James Home from DC a Loser

Ken and I were at Fedex Field most of the day so I'm not sure how much the national broadcast covered of LeCrabDribble being at the Redskins/Cowboys game. It's already laughable that he's a native from Ohio and is a huge Yankees fan, but it definitely slid under the radar for me that he was a huge Cowboys fan. So, up-to-date, here's Lebron's team loyalty: New York Yankees, Dallas Cowboys, Ohio State and the Miami Heat. Vomit. I guess the only thing left for him to do is wear a Sidney Crosby jersey to the Winter Classic.

What annoyed me was the pre-game taunt:

In DC for My Cowboys game tonight. Gonna be a lot of sad faces tonight in this area. Lol!!"

First, no heterosexual male should ever use "Lol." Ever. And if we're going to talk about crying faces....here's a picture to sum that up...which applies for every final playoff series he's been in so far.

So, what did native Kevin Durant have to say back?? 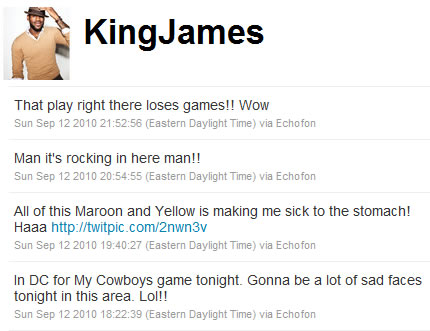