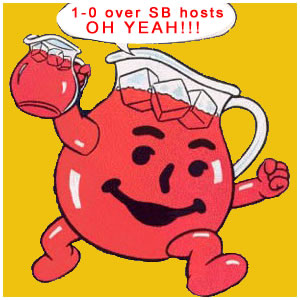 God damn it's nice being on the winning side of one of these games (that is a team better than the Rams). The new era of Shanahan and Bruce Allen has gotten off to the start we all wanted and more. Cowboys' fans are calling for Alex Barron to be cut, have hit the panic button with Wade Phillips and Jason Garrett, and after six months of hearing Kevin Kolb is the second coming of Jesus Christ, he gets knocked out and now a QB controversy is brewing. Ahh...the Kool Aid sure tastes good when it's other teams fans doing all the bitching. Although the Redskins got the W, they should be sending Thank You letters to Jason Garrett.

The Redskins defense in the last 5 games, including pre-season, has given up a very high per rush average: (8.1 BUF), (4.9 BAL), (5.0 NYJ), (2.3 ARI), and (4.7 DAL). Wouldn't common logic, history, and a suppressed ego tell any coach to run the ball? The answer is "Yes," unless you're a ginger named Jason Garrett. I don't know for sure, but the coach on the other end of Garrett's head set might have been Andy Reid. Who remembers the 2008 game at Dallas where the Jim Zorn Redskins won 26-24? The Cowboys rushed the ball only 11 times (4.0 per carry) to 47 passes. TO had more rushes than Felix Jones, who had 1 touch all game. Why do coaches take the ball out of their best players' hands? Is it time to photoshop Wade Phillips and Jason Garrett on the Dumb & Dumber movie poster? Quite possibly.

Sunday night, Dallas rushed the ball only 22 times (4.7 per carry) yet threw the ball 48 (for 31 completions). Joe Gibbs, who sat shoulder-to-shoulder with Dan Snyder in the owner's box, must have been shaking his head. The famous quote "Those who forget history are doomed to repeat it" applies here.

It's certainly hard to say run the ball more, though, when Alex Barron is one of the worst run Tackles in the league. The Cowboys ran the ball 9 times left, 9 times up the middle, and only 4 times right. They did get 6 yards per carry on those right runs, so who's to say Garrett should give up on that side so easily?

Enough about the Cowboys, Mike Shanahan summed up how this team willed themselves to a win in a sit-down with Kelli Johnson:

Take a look at Rak. If he doesn't give a 110% effort around the Right Tackle, the official is not going to make that call. A lot of the guys at the end of the game are going to go 85% instead of 100% and there's no way he's going to be able to stop Brian on that last play unless he tackles him. Those are the type of efforts you're looking for.

Hmm...players who play at 85%. I wonder who's he talking about? In all the excitement you may not have noticed but Haynesworth was NOT in the game for that final play, which was a rush 3 protection package - right up his alley. I sat behind the Redskins bench for the 2nd half and Haynesworth did not talk to anyone that entire time. Players that were high fiving after team changes...he stood alone. Phillip Daniels walked right by him another time. It's 100% clear he is not part of this locker room.

In that same interview, Kelli mentioned how Romo said he had never seen that many corner blitzes in his life. Shanahan confirmed as much saying Romo would pick any team apart if given the time. The thing is, the Redskins blitzed from everywhere.  Safety blitzes from the middle and off the edge.  Corner blitzes, zone blitzes. Twist stunts with his inside backers. Haynesworth lined up at NT off center on some plays. Only thing missing was Haslett blitzing himself. This win is ceratinly filed in the ugly category from the offensive standpoint, but for a team that's still learning to gel after such a large staff and roster overhaul, it could be just the boost they need. It's already showing since Monday was a day off yet a lot of the players arrived at Redskins Park to watch film.

The players believe in this regime - there's no reason fans shouldn't either.