Terrence Austin Talks About the Leadup into Final Pre-Season Game

Share All sharing options for: Terrence Austin Talks About the Leadup into Final Pre-Season Game

I had the chance to talk to the 7th round draft pick, Terrence Austin, briefly last night. He wasn't sure what unit he'd be playing with versus Arizona or what Special Teams packages he'd see since they keep switching it up. He's maintained his current weight in the 170s, which is where the staff wants him. After the jump I get more into the fun stuff with rookie hazing and trash-talking.

How are you feeling about the final pre-season game and cut?

Terrence: I'm feeling good about it. I just want to go out there and continue to play like I've been playing. Play a mistake free game. Make big time catches like 3rd down catches and show that I can be trusted and depended on when I get the call.

I gotta ask. At UCLA you had nearly 200 total KR and PRs...yet never took one to the house. What's up with that?

Did you smack your teammates when you got back to the sidelines?

Terrence: [laughing]. Yea, we got into it every Sunday at film session.

Terrence: Meetings at 8am...go over film, practice a 1pm. Done at 3pm at the latest. I might take a nap when I get back...relax. Get my mind on something other than football.

What do you know now that wish you knew at the start of camp.

Terrence: I don't have any regrets. I think I came in well-prepared. My expectations were...I expected everything that happened. I don't regret nothing now.

Terrence: He told me how everything was going to go [in camp].

What's the key to getting good separation and being labeled 'a good route runner'?

Terrence: It's a lot of different things. What I did learn when I first got here, something I already knew but I didn't really appreciate that much, football is literally a game of leverage and angles.  When you're running your route, you can be a good route runner. It's all about playing fast. You can't high step anything. You have to really be pushing. These [defenders] are so fast and a lot smarter...they know every trick in the book so you really have to be on your game.

Who's the bigger trash talker...DeAngelo Hall or LaRon Landry?

Terrence: Wow [laughing]. Both of those guys are real confident. It's fun to see them out there on the field. I have to say I've seen Hall talk the most the last couple weeks. He can back it up because he had a couple interceptions.

Do they get into guys girlfriends and what not?

Terrence: I don't know. I haven't heard anything crazy and no one's said anything to me. I've heard it gets that crazy though.

What kind of hazing did you get?

Terrence: I had to carry helmets. Some of my stuff in my locker came up missing and I had to go searching for it like an Easter egg hunt.

Did you have to do a skit like the rookie OL did?

Terrence: Me and [Perry] Riley did a slideshow of most of the guys on the team and we made a match with some look-a-likes. Coaches too.

Terrence: Oh yea. The Safeties Coach...Steve Jackson. We made him look like David Allen Grier. 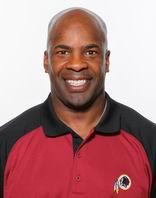