Interviewing and Partying with the Hogs; My 5 Minutes with Joe Gibbs

Share All sharing options for: Interviewing and Partying with the Hogs; My 5 Minutes with Joe Gibbs

A question that pops up at tailgates or car rides every couple years is "What's your favorite Redskins' moment?" For me, they ranged from attending the 1991 Super Bowl parade as a kid, to the time Ken and I were first credentialed for OTAs, to interviewing Dan Snyder...well, this past weekend at the Pro Football Hall of Fame takes the cake. How often is it in one night a Redskins fan get to hang out at an open bar party and talk to all the Hogs, the Redskins owner, Bruce Allen, and Coach Gibbs?

Saturday was about as perfect as a day anyone could ask for. It was a warm day with no humidity, which was refreshing since we had a smoking room at the Motel 6 and by the smell of the place, I'm guessing Andrew Dice Clay had a family reunion in there the previous night - not to mention the bathroom light/fan sounded like one of those Middle East, city wide air raid horns.

After an afternoon wakeup, we started out the day meeting up with all the Redskins fans, including the Hogettes, at the Extreme Skins tailgate. If you haven't had a chance to meet any of the Hogettes, they are some of the nicest, most selfless people I have ever met, which is evident by the large amount of community service they do in the DC area.

After sharing a couple frothy ones, Ken and I headed into the stadium to meet up with the Redskins Historian, Mike Richman, who had setup the equipment for our show directly next to BMitch and Chris Johnson's broadcast (who were on the air live for 106.7 THE FAN). We did three segments, including interviews with George Starke and Joe Jacoby.

I really can't emphasize enough how fantastic Russ Grimm's speech was (watch it here). He covered every part of his life starting from childhood and gave a lot of love for his fellow Hogs. The funniest part of his speech for me was his explanation for his distaste on how his Pittsburgh coach moved him from Linebacker to the Offensive Line. Grimm's tune eventually changed when his coach told Russ to think about it this way, "There's no greater feeling than moving a man from Point A to Point B, against his will."

Both Bugel and Grimm mentioned Joe Jacoby in their speeches, which is the first step into getting the recognition and awareness out there for him. Speaking of Bugel, my man crush for him continues to rise. In his enshrinement presentation speech, he took multiple shots on the Cowboys, which was awesome since 50% of the stadium was Cowboys fans. All they could do was sit there while Boss Hog talked about running right at Randy White 10 straight times... (text and video of Bugel's speech here). They then showed a clip of Randy White walking off the field like a train just hit him. Bugel elaborates:

There's one game that I'll never ever forget. It was going to be Dallas or Washington going to the Super Bowl. We had them up by maybe two touchdowns. Coach Gibbs come up and he said Buges what do you want to run. I said '50-Gut. Let's run right at Randy, not away from him.'

So Randy was lined up against Grimm and it was one after another, plus 5, plus 6, plus 5. We get in the huddle. What's the play? 50-Gut. We ran it 10 straight times. That's when Randy White realized that Russ Grimm was not only a great football player but a Hall of Fame football player." 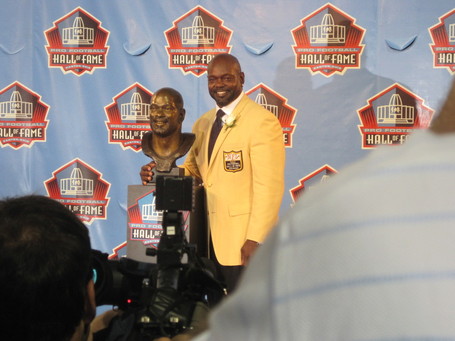 After the ceremony, we headed backstage to attend Russ Grimm's private party. As we walked along the path Emmitt Smith was next to me taking a picture with his bust. Troy Aikman, Steve Young, and Roger Staubach were chatting it up with other NFL legends. As we took our next step, right in front of us was Coach Joe Gibbs. Ken will tell this story in detail later, but we shared a ride with him to Grimm's party tent. The first question I had to ask, "Coach, it's been rumored the day we drafted Sean Taylor, that you originally wanted to pick Kellen Winslow and Gregg Williams got on the table and demanded we draft Sean. Is that true?"

Coach Gibbs: Absolutely not. (laughing). We knew we wanted Sean all along. We had brought Kellen in for workouts and the next morning for three hours, he was nowhere to be found. I guess he enjoyed his sleep. So, we crossed him off the list then.

Well, that's finally settled. I then asked him about the infamous seat cushion game, and what his reaction was when he saw Jerry Glanville come out with MC Hammer and Evander Holyfield. He just started laughing and said it was the easiest game he had ever planned. "Remember that long coat he had?!?" (laughing). Oh...I do.

Ken and I started chatting with Bruce Allen when the Hogettes came in. Bruce gave them a big hug and the Hogettes then removed one of their Redskins' pins and fastened it onto Allen's collar. Bruce then shouted out, "I GOT MY BADGE!!" Great moment.

Of course, I had to go up to the Redskins owner. It'd be a good chance to see if last Tuesday was just a show or if he genuinely cared about who Hogs Haven is and what we're trying to do. I was standing outside the tent waiting for the right time to step in when Bruce Smith walked up for the first time and embraced Dan with a hug. I wish I had video of it because as I said, "The only thing missing from the hug was the lead up run through the grassy fields." Ken replied, "the only thing missing was tongue." Classic.  Dan and Bruce of course have a very close relationship, but the hug reminded me of when Arnold Schwarzenegger hugged and picked up Danny Devito in Twins. For what it's worth, Bruce is still to this day a very, very large man. The conversation thinned out, so I made my move, "Dan, how are you doing? Kevin from Hogs Haven." He quickly smiled, "Hey yea, how is everything?" and we continued with a brief chat. For all the Dan Snyder haters out there, and I was one of them, it really is dawning on me how much the decade of media bashing has skewed my perception. I'm not saying he's a Saint, I'm just saying the two interactions I've had with him have gone better than I could have ever expected.

Ken and I then went back in and started taking pictures with Grimm's Hall of Fame bust. Jacoby and Lachey happened to be there signing the "Hogs Night Out" poster next to the bust. As Jacoby started writing, Lachey yelled over, "J...A...C...". Classic. Again...open bar. 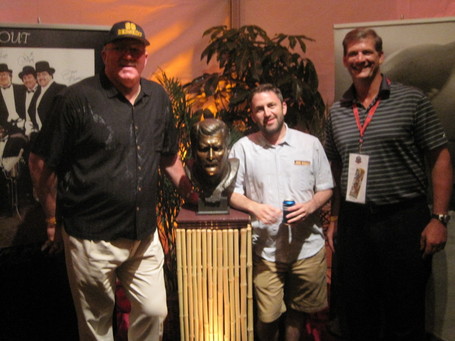 It was clear in talking with Donny Warren he's still a little bitter about being canned by the Redskins, but he's now a pro scout for Carolina and enjoying that. Jim Lachey mentioned he'd been staying busy with business development in Columbus, Ohio, but more interesting is that he's doing Ohio State football radio broadcasts.

Towards the end of the night, Bugel and Wade Phillips had a long, and what looked to be, hysterical conversation (they overlapped three years together with the Houston Oilers in the late 70s). I took a moment to step in and ask Coach Phillips a question that has been on my mind for the last 3 months, "Coach. You obviously play the Redskins Week 1. How do you game-plan when Shanahan has been out of the NFL for a year and has a new team of personnel?" Coach Phillips, "It's going to be real tough." I then asked, "Do you go back to the film from his time in Denver...maybe even San Francisco?" From there he just thought for a second and re-iterated it's going to be a real challenge. Can I go ahead and ink the Redskins in as 1-0? And how bad did Romo look last night? There's obviously a lot of football still to go and the Redskins still have another injury-free month to get through. I still can't believe I forgot to ask Coach Phillips if he'd be dancing to YMCA tonight.

One of the greatest parts of the night was during my conversation with Wade Phillips, I hear a roar and I turn to see all the Hogs raising their Bud Light cans in the middle for a toast over Joe Bugel's head. I really am jealous my 20s-30's did not overlap the era of the Hogs. Fantastic night...and certainly my new #1. Hopefully the Redskins can win a Super Bowl while I'm over the age of 10 so I can enjoy the real party - like this one.

All the pictures will be up on the Hogs Haven facebook. Oh, and how can I forget...by coincidence, these were the chips several us in the car randomly grabbed at a pit-stop on the way home. Redskins all the time. 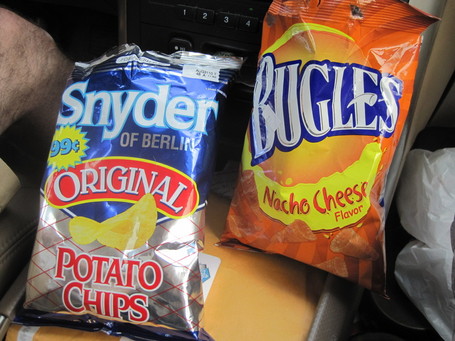 And a picture of our us interviewing Joe Jacoby... 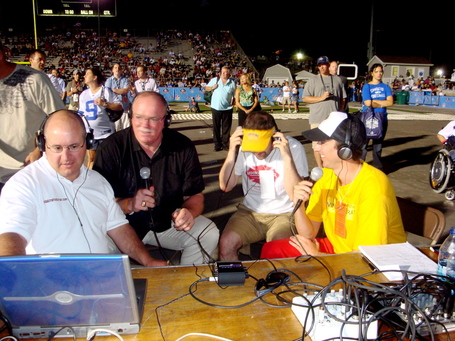