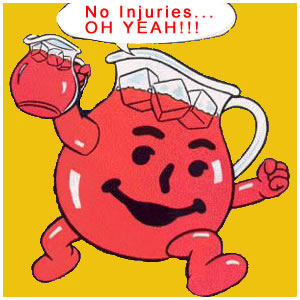 Perry Riley's mild ankle sprain was the only damage done against a very physical NY Jets, so that's a win. After the jump I get into some game film screenshots for Willie Parker and Ma'ake Kemoeatu, but let's start from the top.

Since there's a decent chance Rex could see action this season, what I wanted to see most this game was see Rex protect the ball. Jason Campbell kept the Redskins in games simply for his knack to do that. Rex failed this test miserably - again. He muffed the shotgun snap and on a sack, he put the ball on the ground. He's made a career out of fumbling averaging one every other game he plays and already has 5 this pre-season so far.  Fumbles aside, the former Steve Spurrier pupil posted a respectable 72.7 QB rating, which against the Jets defense is more than any of us expected. He drove the ball down the field and showed that when he has protection, he can throw a strike (although that 3rd down pass he threw out of bounds to a wide open Joey Galloway on the first drive was a 2009 ‘shake my head' moment).

Speaking of Galloway, there's not a lot to hate on. He broke Cromartie's knees on one route and showed he can still not only get separation, but also catch over the middle. That should advance him into the next round of cuts.

Willie Parker s-t-r-u-g-g-l-e-d. Post game he had this to say, "For what I did with the opportunities I had and the running room that was there, I could say yeah [I was pleased].... It was kind of tough sledding. It definitely was a grind." Really? Throwing the OLine under the bus are you? Well, when I watched the game again there were two plays that stood out where Parker could have run differently for extra yardage. 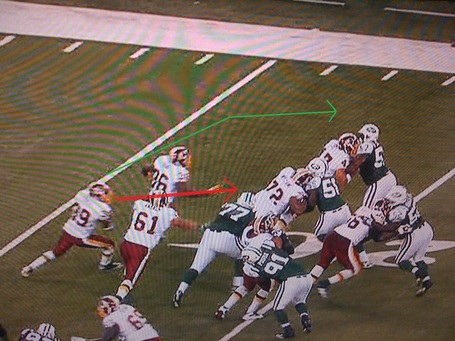 On this running attempt, Willie Parker decides not to follow fullback Darrel Young (who's taking the outside) and instead decides to run into the path of Kris Jenkins, arguably the best Nose Tackle in football. Trent Williams and Cooley are owning their men and if Parker had stayed outside, his chances for a big gain would have been a lot higher. 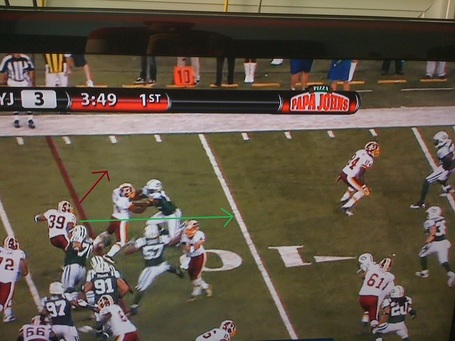 On this rushing attempt, Willie hits a split with Antony Armstrong blocking directly in front of him. Since Willie decided to cut left/outside, he lost his speed and the CB was able to shed Armstrong and make the tackle just past the line of scrimmage. If Willie had taken the green path, he'd be inside the 10 yard line with full speed and a chance to make a move on a streaking Jim Leonhard.

As a footnote, Cooley makes the All Kool-Aid Team for his 5-star blocking. In both of these pictures he's man-handling his defender. When the Redskins went to 7-man protections (RB and Cooley in the back-field), Cooley did not miss a single block, and he faced every different Jet that suited up: Jason Taylor, Jim Leonhard, Shaun Ellis, Bart Scott. On run plays when Cooley was on the line, I saw him driving defenders backwards.

As for the defense, the difference between Kemoeatu and Haynesworth is as comparable as Peyton Manning and Danny Wuerffel. I've been a hard critic of Hayenworth the last several months, but he looked like a Pro Bowler out there. He was consistently in the back-field whether he was pushing his defender back or coming around the end on a stunt. Anytime Albert was in 1-1 coverage, it was like watching one of those Running of the Bulls videos when the bull gets hold of a Spaniard. Rag doll. Haynesworth to me has to see a lot of action at NT. Kemo again got pushed back on every single play at least 3 yards...and that was against ONE OLineman. Mangold is one of the best, but the Guards were having their way with Kemo, too. The Redskins run defense has been WOEFUL this pre-season giving up yards per rush: 8.1 (Bills), 4.0 (Ravens), and 5.0 (Jets). When the NT is pushed 3-yards backwards with both Guards pushing untouched, running backs are guaranteed great stats. Here's the image that stood out most to me. 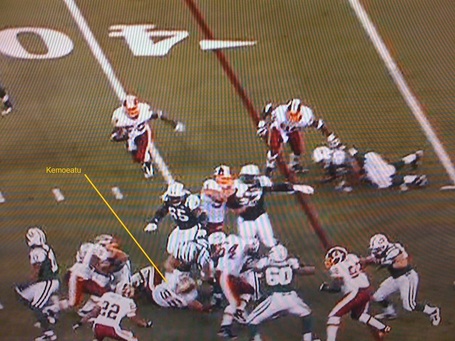 Off the snap, Mangold drives Kemo backwards 5 yards eventually landing on top of him. How does this happen to a 350 lb Nose Tackle? It's clear he's not back to his prior form. There's a reason lineman do so much work on the sleds. It teaches them to continue pushing after first contact. On almost every play, Kemo stands upright after contact...there is no push or drive. Perhaps coaches are telling him to stand tall, but as I said last week, nothing disrupts an offense more when the NT can take away the pocket for a QB to step up in. Not once has he demanded a double-team which is a major problem that hopefully #92 can solve. Either way, you won't be seeing anymore Fat Albert posts from this guy anytime soon.

Another player that disappointed was Selvish Capers. Like Kemo, he was driven backwards with ease on 1-1 action. That might explain why the Redskins have decided to start him at Guard for the Cardinals game. If he can't do well there, he won't make this team. I didn't follow Rinehart and Will Montgomery exclusively, but they excelled on the plays I did see.

All in all, the Kool-Aid pitcher is still full.