Kool-Aid Report: Redskins Are Doing Just Fine (Except for Kemoeatu)

Share All sharing options for: Kool-Aid Report: Redskins Are Doing Just Fine (Except for Kemoeatu) 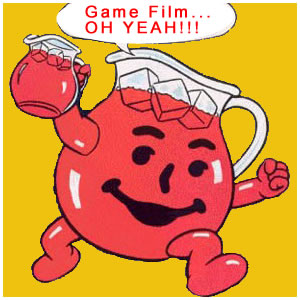 Man...even after living almost my entire life in DC, I'm simply still not used to the highs and lows Redskins fans bring each week. After the Bills game, it was "We have a great shot at winning the NFC East!!" to after the Ravens loss, "Cut Larry Johnson!!" and "We'll never win under Dan Snyder!" Take a deep breath everyone. Pre-season games are practices. Players who have never played together before are learning each other's nuances, and on top of that, a new system as well. Casey Rabach and Chris Cooley said as much post-game:

Rabach: "We had a day, maybe a day and half of game planning. We're just keeping it real basic."

Cooley:  "You have to look at it as a practice. We're pretty limited in what we're doing...It doesn't count. It's a building block."

Shanahan was clear he's only using a limited portion of the playbook as to keep the Cowboys from seeing anything worthy on film. The final score is also meaningless. The Redskins were up 3-0 at the end of the first quarter and starters were already coming out at that point. There's a lot to learn from this game, so let's look at the progression the next couple of weeks before throwing everyone under the bus. Since training camp is over, the Redskins are now beginning their in-season routine of each week's preparation.

If that doesn't do it for you, the Redskins didn't win a single pre-season game one of the years they won the Super Bowl, and another year they won every pre-season game before starting the season 0-5. Bad losses happen. If anything, it humbles the team and re-focuses them to concentrate harder in the film room. The dropped balls and lack of continuity were discouraging, but the Redskins had an impressive first drive all the way down field. Yes, Fred Davis should have squeezed that TD ball, but how can a fan expect perfection when really they've only practiced against themselves and a High School team Buffalo?

So, on to the game and players - some things I noticed...

First, Larry Johnson is getting killed by fans for the wrong reasons. Watching the game again last night, there were multiple missed blocks that allowed LBs to hone right in on Larry for a loss.

- The first play from scrimmage, Jammal Brown got pushed backwards on a screen right, which forced Larry out wide and a minimal 3-yard gain out of bounds.

- On 3rd and 1 of the Redskins third drive, Terrell Suggs made Trent Williams look like a blocking sled pushing him straight back into Sellers, who was attempting to lead block, which resulted in Johnson getting pancaked. It reminded me of one those 4-car accidents where one driver rear-ends another and it just keeps on going. Can we fault LJ for that? Portis clearly has a quicker first step, but let's give Larry another shot. Artis Hicks said as much post-game:

"We weren't able to get a lot of holes open for him. I know I didn't do a good job of covering my guy up."

Ma'ake Kemoeatu I thought played horribly. It seems like he's still at 60% as he's not chopping or pushing off the snap. On almost every play he failed to push the line back past the line of scrimmage...and that was when he was getting 1-1 coverage! Take a look at this picture: 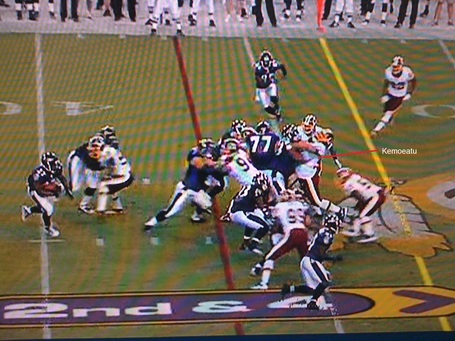 Kemo is a full THREE yards off the line of scrimmage and the RB is just getting the ball. Kemo allowed the Ravens defender (who is 35 pounds lighter) to get inside on him and push him straight back. As a result, two-time Pro-Bowl Full-Back Le'ron McClain is past the line of scrimmage untouched and has plenty of momentum to take out Fletcher. As a result, Rice was in the secondary before being touched and picked up the first down.

My concern is that Kemo got out-manned on 1-1 coverage throughout almost every play. An effective NT should be pushing the OL back (taking away the pocket) and forcing a Guard to chip opening a hole for a LB. Neither happened and this was consistent throughout the game. Only on 1 play did I see Kemo succeed in this and on that play the Center dropped back.

Haynesworth, on the other hand, was able to push the Center  back. Granted, he was going against backups, but it showed a sharp contrast of to what wasn't working earlier. Adam Carriker was consistently getting his guy behind the LOS, so that's good news there.

Mike Sellers I thought had a rough game. He missed a block and seems to struggle from the same problems he did last year. The FB is suppose to attack the hole as if he has the ball...Sellers seems to hesitate first looking for that hole...and by that time the defense is already behind the OL. He's never had great hands, and I wonder if the addition of FB Carey Davis has more to do with Sellers production than it does with the injury.

From a turnover standpoint, it's clear Haslett has emphasized stripping the ball. The majority of tackles I saw players trying to strip and punch it out. I'm anxious to see the adjustments made for the Jets game, but there was a lot of positive things to learn from for this Ravens game.