I think Bill Walsh's legend is growing excessively, but kill me for that in the comments. I'm told, however, that one of his greatest contributions to the game was meticulous gameplanning:

If [Walsh's] legacy is not about reducing the risks of throwing the ball through a disciplined approach, it is by revolutionizing how coaches prepare for games through simple organization: scripting plays, analyzing tendencies, self-scouting, probing defenses to look for weaknesses, and so on. As with his plays, none of Walsh’s innovations here were truly new, but his approach obviously worked because not only was his success outsized but so has been the success of those who coached with him — those that were able to observe his methods.

Meticulousness is not often associated with lethargy. Coach Shanahan has, forgivably, perhaps taken meticulous gameplanning to its illogical limits. Exhibit A: A Shanahan authored novel-length two hundred page scouting report for the Broncos-Indy Colts game of January 6, 2002. By way of example, and I can't really read this, page 166: 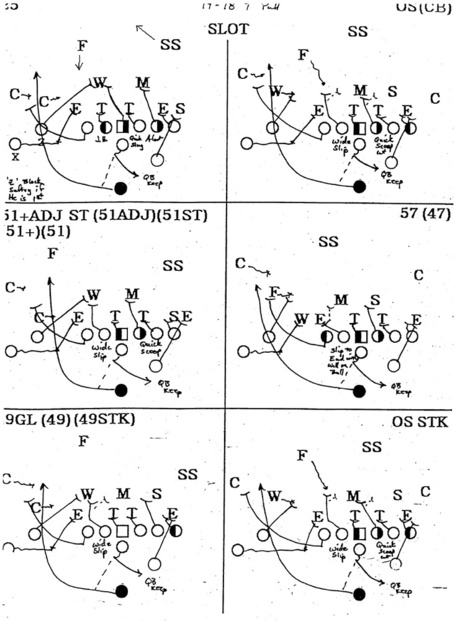 And there are dozens more just like this. The planning was for naught, unfortunately, as the Broncos lost 29-10. That is obviously not the point. But it does suggest that we now have, refreshingly, a proven workaholic, gameplanning nut in Washington. This is in stark contrast to, by way of example, Steve Spurrier. For those of you self-loathing enough to recall, Spurrier's time in Washington was peppered throughout with rumors of his disdain for long hours. Hat tip the Bog a while back with a nice little anecdote from the Associated Press:

[Spurrier] stressed that he doesn't want a job where he's in charge of personnel or the salary cap - "They've got other guys who can do math, don't they?" - and he doesn't think being in the NFL has to be a 100-hour-a-week job.

"I saw a story saying [current Redskins Defensive Coordinator and apparent workaholic] Jim Haslett comes in at 4:30 every morning - that's not doing him much good," Spurrier said of the Saints coach, who went 7-9 this year.

Yuck yuck yuck but the joke was ultimately on Spurrier (and us I suppose). Haslett's 7-9 in 2001 matched Spurrier's best year in Washington, before walking away from the NFL permanently after a 5-11 disaster. Haslett's 4:30 starts did him much good the year prior, when he was named NFL Coach of the Year (I think it was the Sporting News) for taking a Jeff Blake led Saints to the playoffs (and a winning season) for the first time in eight seasons. It also helped him destroy a Spurrier led Redskins 43-27 in Steve's first year. Dan Steinberg noted Haslett's hours:

"Steve can work whatever time he wants, I really don't care," Haslett said then, while telling the press that his typical work day was between 12 and 18 hours long. "He can do his deal, and I'll do my deal. There's not a coach in this league that doesn't work hard. I don't know any coach that comes in at 9 o'clock and leaves at 4 o'clock."

Back to Shanahan, who picked up his meticulous gameplanning work ethic by time served under the Bill Walsh tree and has followed that up with a ludicrous workaholism that rivals and perhaps exceeds that of beloved Coach Joe Gibbs (legendary workaholic). Mere willingness to live to work guarantees nothing in the NFL but does provide some peace of mind after the Spurrier experience. If you aren't the best at your job, then at least work the hardest, etc.

How big of a work-nut is Shanahan? It was rumored (but probably false) that Shanahan took a total of two days off while toiling for tyrant Al Davis from 1988-89. Why?

``With the Raiders, it was like, that was the thing to do,'' Shanahan said. ``Nobody took any time off because Al (Davis) didn't want anybody to take time off. That was kind of . . . '' His voice trailed off, and if you could imagine a window into his head you could almost see the little red flag popping up, warning him not to say more. But it was clear from the dismissive expression on his face that such public shows of self-denial don't do much for him.

Not just for fear of Davis has Shanahan worked, however. In addition to Exhibit A, Shanahan has a well-documented "tireless work ethic" spanning decades (see "workaholic" here) which he has apparently instilled in offensive coordinator and son Kyle Shanahan. Even when he's not working he's, er, working putting in hours to prepare for putting in more hours once employment resumes:

[After his firing from Denver] Shanahan was offered several network television jobs, said his friend, but preferred not to put himself in a position to have to say negative things about prospective employers.

Instead, Shanahan took an office not far from the Broncos' complex and spends three to five hours a day studying film. During the offseason, NFL and college coaches came in to confer with him. During training camp, Shanahan visited four or five college and pro teams -- including Urban Meyer's Florida Gators and Bill Belichick's New England Patriots -- to study what they were doing.

The cynic in me doubts that the mere will to work will actually yield the only currency traded by fans: Ws. There is ample evidence in this post that gameplanning religiously or showing up at 4:30 in the morning can still lose you games. But Shanahan is a proven winner and has assembled an accomplished staff consisting of suspected or proven workaholics at the highest levels. I believe that Shanahan's success has had at least as much to do with his work ethic (and the same can be said for Coach Gibbs as well) than some inherent football coaching genius, an elusive trait that is difficult to document, in any event. So even if Shanahan is not a genius -- who knows, certainly not me -- there is no doubt that he will have put in at least as many hours as that guy/awful sumbitch on the other sideline.

I for one will rest a little easier knowing that Coach does not.