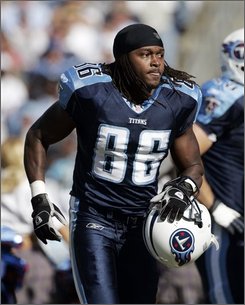 Roydell probably would have won a starting spot on Zorn's squad last year if he hadn't broken his finger in training camp. Zorn had spoke highly of him until then, and now he is back fighting for a spot. Williams shattered Tulane and Conference USA's career TD reception record with 35 TDs. In the NFL, he eventually made the 3rd year jump to a solid WR (holy sh!t it can happen) in 2007 after the Titans drafted him in the 4th round. Early in the 2008 playoffs, he broke his right ankle and struggled after that. Roydell filed a grievance against the Titans after he said they rushed him back (giving him shots to the ankles) and releasing him immediately after they realized he couldn't play.

Sounds like a mess, but he seems to be recovered now. He has great hands and runs crisp routes. Definitely one to keep an eye on.

Stats after the jump...

Tidbit: He was drafted in the 5th round of the 2000 MLB draft by the Cincinnati Reds.