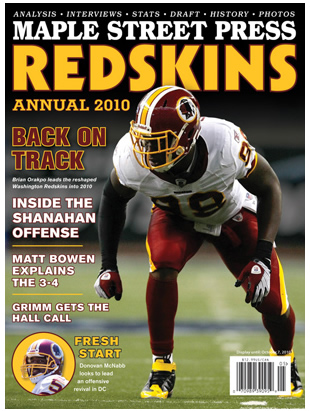 You may or may not have noticed over the last two months, but Ken and I had not been able to post as frequently as we typically do. Maple Street Press, who has worked with other SB Nation sites before, contacted us to do their first 128-page Redskins annual magazine. We of course jumped at the opportunity. When Ken and I first sat down, we were adamant about not making this a fluff piece. As a result, we brought in some amazing writers to help put together the ultimate, all-encapsulating Redskins magazine one could find. What does that include? The full table of contents is here, but a couple of my favorite highlights are:

Doug Farrar, Yahoo Sports, Football Outsiders: Gives an extremely detailed 8-page look into Shanahan's playbook. He lays out the exact naming scheme for Shanahan's west coast offense and play diagrams in every situation imaginable (including some Super Bowl plays that were successful in the past). When you over-hear a play called in from the sideline, you'll know exactly what is going to happen.

Matt Bowen, Former Redskin, National Football Post: Bowen provides insight into Haslett's scheme with a play diagram of a typical blitz we'll see and how the Redskins players will be used.

There's also a round table discussion where we ask ex-Redskins, Politicians, and DC print/radio media the same two questions, "prediction for the season" and "what they'd say if they ran into the Redskins' owner after a couple cold ones"....answers are pretty entertaining.

There's also timelines of how the current Redskins team was built once Cerrato was canned, History of the Redskins/Cowboys rivalry, fantastic write-up on Russ Grimm's career, and the Integration of Bobby Mitchell to name a few. This was a blast to do because this is everything we would ever want in a magazine. They'll also be available in Barnes and Noble and magazine stands in DC, but ordering through Maple Street is the quickest and will bring it straight to your door. HAIL!

Since I have a man crush from Doug Farrar's piece, I included an excerpt after the jump...

Offensive terminology is the thing that connects players, coaches, teams, and systems - it's how certain "pro-style" quarterbacks are more valued coming out of college (they have a basic command of a system's vocabulary), and it brings formerly scattered elements together with a quick-fix mentality. So it is now with Shanahan, McNabb, and the Redskins. But how do all these disparate pieces work together? With a common terminology. Regardless of the kind of West Coast Offense we're talking about, the actual playcalls are similar enough - or the concepts are similar enough - for new faces to go into new places and get things done.

Teens: Runs in which a back will take the ball across the backfield (14 FB Counter, 17 Power, 15 Force)

[<<PLAY DIAGRAM>>] Red Right is a two-back set, with the backs lined up four yards behind the tackles. This looks like a power formation, with two wideouts and a slot receiver, but it's also intended to provide formation diversity. One of Shanahan's favorite passing concepts is to take one or two backs and motion them into wide sets......