Based on Redskins' 2009 DL Pressure Statistics, Albert is Halfsworth

Share All sharing options for: Based on Redskins' 2009 DL Pressure Statistics, Albert is Halfsworth

With the month off leading into training camp, and the help of Neil over at ProFootballFocus, I decided to dive deeper into Haynesworth's stats and just how much his presence helped the sack totals. We exchanged a few emails and Neil took a first jab at Haynesworth's value in relation to Andre Carter and Brian Orakpo's production:

Of the 57 times he was on the field, the vast majority of the time (43 times) he was playing DRT. Therefore, from looking at the 108 positive instances of Orakpo and Carter pressure I found a maximum of 5 where Haynesworth may have had some impact over and above what may be expected from a standard DT.

Well, that's not encouraging. Of course this stat only highlights the passing game. Haynesworth will never get the credit he serves from casual fans for his run stuffing ability. The goal line stop versus Brandon Jacobs on the 4th down play week 1 at New York still rings true to me. But Albert was really brought to DC to do one thing: help generate sacks and interceptions. In 2008, the Redskins ranked 28th with 24.0 sacks. In 2009, Washington jumped to 8th with 40.0. Haynesworth is not the only factor in the equation...of course Orakpo is. It's still a gray area, though, exactly how much Albert contributed.

In 2007, Andre Carter played RDE and netted 10.5 sacks. In 2008, he had 4 sacks as RDE. They move him to LDE in 2009 and he has 11. So why the dive in 2008? Gregg Williams and Greg Blache essentially had the same cast of characters up-front except for the addition of Jason Taylor, which you'd think would help. Here's a table of all of Carter and Orakpo's 2009 activity: 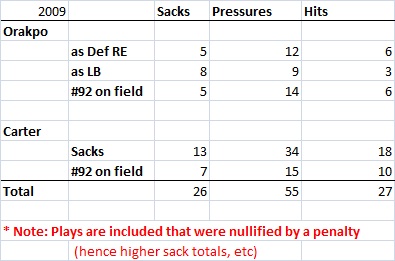 First, Orakpo should be rushing the Quarterback on every play. He had more sacks as a LB, but his sack numbers are skewed to me from that Oakland game (OAK ranked 30th with 49 sacks allowed). Either way, #98 and #99 did the job just fine without Al. ProFootballFocus brought up an excellent point, though: It's not just about sacks...it's really about pressure, which catalyzes so much defensive success. The Redskins ranked 26th last year in interceptions with a measly 11, so that number did not jump like we had expected. In fact, they had 3 more INTs in 2008!

In short, without Albert, and switching to a 3-4 with a massive NT in Ma'ake Kemoeatu, I think the Redskins will be just fine. Piece out, Albert.

Here's the link to ProFootballFocus's Haynesworth xls sheet which lists every single play Orakpo and Carter generated pressure from and the result. I added in some total formulas. The sheet goes into extreme details including how they rushed (Inside, Outside, Bull). Take a gander, and I look forward to hearing your take.