Poll: Who Is the Worst Redskin of All Time?

Share All sharing options for: Poll: Who Is the Worst Redskin of All Time?

With it being a slow time for news, I thought it'd be fun to ping the community on who's the worst Redskin player of all time. I don't mean worst signing.

Given the better state of the Redskins, I'm praying feeling that this will be the last time we have to conduct a poll of this nature...but fun none the less. We've killed the bad signings to death, so let's focus on some stats. Thinking back through history, a lot of QBs and WR's come to mind, including Norm Snead, Michael Westbrook, Jeff George, and Tim Hasselbeck. We cover all the stats after the jump, so please give a look over before voting. I also cover the players you think should be on there (like Deion), and I explain why they're not.

All the candidates/stats/bios after the jump " 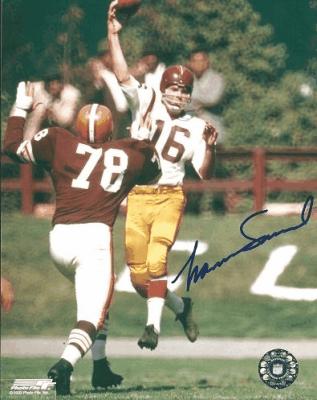 Norm Snead: It' a good thing they didn't keep sack records in the early 60's because Norm would have been a leader. These QB rating numbers are god awful. If Jason Campbell could muster an 86.4 QB rating with the Redskins OLine last year, I really question what Norm was doing in the pocket. Snead only won 9 games in his threee years with the Redskins, and that bad pace continued through his entire career. (He only had 1 winning season in his 16 years in the league). OUCH.

After hearing stories of the woeful 60's, and looking at his career stats, I'm really leaning towards Norm.

Michael Westbrook: Broken wrist, knee, hamstring injuries...ego. Never a dull moment with Michael. Only year they made the playoffs in his career was his breakout year. Of course there was the infamous melt down where he pummeled Stephen Davis at practice.

Brandon Lloyd: Brandon has to be up there. He got into Gibbs' doghouse early with his attitude and poor work ethic. His 2007 season was cut short after breaking his collar bone in practice.

Deion Sanders: He's an easy guy to target since he was a Cowboy, but he did muster 4 INTs in his single season with the Redskins (2000). The most he ever had in Dallas in any season was 5 and for his career 7. With the Redskins, Deion had 41 tackles, 1 FF, and recovered 2. He was a bit disappointing in the punt returns, returning 25 for an average of 7.4 yards and 0 TDs...pretty much his career low. So, since his numbers were par for his career, he didn't make the poll.

Update1: Adam Archuleta: I didn't include Adam since he was more of a bad signing than a bad player. He played well on Special Teams, had an INT, and played the run well. He got killed in coverage and was benched. I didn't think he warranted to be on the list with players that sucked for multiple years.

Update2: Heath Shuler: I had him in my notes and missed copy and pasting him in. Heath was a disaster in biblical proportions. Galaxy proportions. The Kwame Brown of Football.