Last week we covered Clint's run for political office, today we get into Canton, OH.

Do you have time in your schedule to make it to Canton for Russ' induction?

Clint Didier: I would looove to make it to Russ', but with this campaign going on and the farm...I'm sure Russ understands. Believe me. It is so overdue for Russ to be in that Hall of Fame. As it is for Joe Jacoby.

One Redskin that I think has never got his just due is Donny Warren. Donny Warren was Tight End for ALL FOUR SUPER BOWLS. Yea, he was known for a blocker and he was a glorified lineman, but boy, when they threw him the ball he could catch anything to him. I think Donny Warren deserves more notoriety and a possible run at Canton, Ohio, then just as anybody does. Because he was an intrical part if not as important as every one of the other Hogs because he was on the end line of scrimmage. Every time they went around the edge either he had his block or it didn't work. I'm a big fan of Donny Warren and I think he definitely needs to be looked at for Canton. Sure, he doesn't have the catching numbers, but is that all they base the Tight Ends on? That's pretty sad if it is. You got to look somebody's team accomplishments. And being to that many Super Bowls with him as the tight end has GOT to be note worthy.

You and Russ Grimm were drafted the same year by the Redskins in 1981. Did you form a bond early?

So you were in the 5 o'clock club?

Clint: I was a special guest every once in awhile. I didn't have the liver to take what those boys could handle.  (lots of laughing).  When I was there it was a lot of fun.

Clint: When we were playing the 49ers at RFK. And there's a TV timeout and we're in the huddle. Joe Gibbs calls a pass play. It was that 9-route down the sidelines.  It was early in the game and it was scoreless at the time. I can remember Joe came into the huddle and told us what the play was. After we got the play everyone stood up. I was visualizing and working it over in my head. I look down at Russ and he's still bent over in his stance. He has his mouth guard half out and a chew...chopping on it. I looked at him. He looked at me. And he said, "Go get it Dids!' I was like, "I can run now. I got Russ' approval." That was a pretty neat time playing with Russ and the rest of those Hogs.

We were a bunch of no-namers, but we loved to compete and win. And we were willing to sacrifice to do it. That's what we got to have out of every system in this country today. 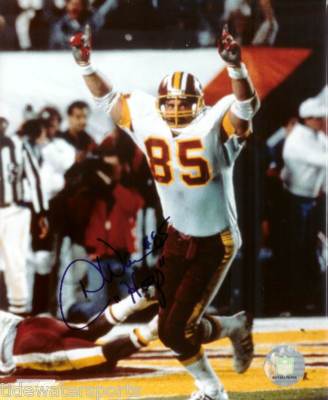 The Don Warren plug is an interesting one. I pulled up his stats from Pro Football Reference, and based on them, Clint is correct - no way he gets in with these numbers. I remember briefly talking to Don at Monk and Green's HoF ceremony two years ago in Canton. He got mobbed by Redskins fans like he was Chris Cooley.

It's hard to imagine Russ Grimm's induction opens the door for the rest of the Hogs. I've always said the Hall is part popularity contest. If you look at all the current TV analysts, they have much easier path in simply because sports writers are the ones who vote them in. When their mug is on TV all the time, it surely helps sway a vote when one is undecided between a few players and one of them you have a personal affinity for from seeing them on TV every week. Michael Irvin is an example of that. Hall of Famer? Yes. First ballot entry? I don't think so. Chris Carter didn't make it in his first year, which shocked me, but I'm not holding my breath for Jacoby and the Hogs - who should be in there. Grimm's popularity has increased exponentially with his successful coaching career winning the Super Bowl with Pittsburgh in 2006 and making it to the Super Bowl with Arizona in 2008. That had to help.

In short, we need to get Joe Jacoby a sidelines gig for Comcast's pre-season games.