An Insanely Early Prediction for the 2011 NFL Draft

Share All sharing options for: An Insanely Early Prediction for the 2011 NFL Draft

Good times for D.C. fans. Strasburg is pitching like the second coming of Walter Johnson, the Wizards just landed the next Allen Iverson (sans weed and off-court problems), the Capitals are enjoying their individual awards while they lick their wounds, and the Redskins are becoming a respectable franchise again. So, having said that...who's going to be the next 1st round draft pick in the Burgundy and Gold?

NFLMocks.com recently posted their results last week, the first 2011 stab I've seen. A few interesting things. Joe has the Redskins selecting 20th after a 10-6 season. I thought that was a comical prediction, but after the Jammal Brown trade, I definitely won't rule it out. 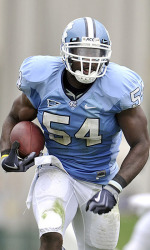 The Redskins need to continue to add pieces to their new 3-4 defensive scheme.

Not a bad guess. Andre Carter is already a questionable fix there, and Lorenzo Alexander, Jeremy Jarmon, and Chris Wilson continue to adjust to that position after being a DE prior.

Sadly, one of the Redskins 2011 team needs potentially could be WR next season (if the other 2 red shirts don't step up). Vinny flare up again! Let's not go there, though.

Who would you want the Redskins to select with that 20th pick? Mike Pouncey, the standout Center from Florida, certainly stands out on that list.