Biggest Gamechanger For the Redskins This Offseason: Bruce Allen?

Share All sharing options for: Biggest Gamechanger For the Redskins This Offseason: Bruce Allen?

Sponsored Post: This post is presented by Sprint. Bringing you the first wireless 4G network from a national carrier. Only on the Now Network.

We do this every week and it seems like there is no shortage of topics in the "game changing" category. On the heels of yesterday's mini-camp, all I can think about is the difference we can all feel thanks to none other than Bruce Allen.

From the first round selection of an offensive lineman, to the relative silence out of Ashburn at midnight the first day of free agency, we have seen stark changes to the franchise that have all the makings for a new day in Redskins Nation.

Bruce Allen and Mike Shanahan have added attitude, discipline and legitimacy to the Washington Redskins organization. These are not just empty words either. The attitude is visible. The discipline is apparent on a daily basis. The legitimacy is tangible both locally and nationally. Bringing in Donovan McNabb has given the Skins some real cache around the league.

Players are fighting for their jobs and the circus that has been a mainstay at Redskins Park the last decade is largely absent--though the Haynesworth debacle is one hell of a lingering vestige of the Vinny era, eh?

But one of the biggest changes was on display yesterday at Redskins Park as dozens of former players attended. Art Monk, Clint Didier, George Starke, Neil Olkewicz, Pat Fischer, Gary Clark, Bobby Mitchell, Mark Moseley, Sam Huff and many other legends took Bruce Allen up on his invitation to Redskins Park to re-insert them into the Redskins organization. Under Vinny Cerrato, former players were devalued, ignored and marginalized.

Thanks to the magic of Steinberg, I can bring you some quotes to illustrate the changed atmosphere as well as to whom these older players attribute the change.

"The first thing it means is that the change in the administration from Cerrato to Bruce Allen is a good thing for the Washington Redskins, because Vinny didn't like us around."

Jeez...it was that obvious, huh? He said that Vinny, "wanted to do it himself." In retrospect, it is nice to not have any of my former heroes associated with the train wreck that occurred here under Vinny's watch. One can't help but wonder what level of success the club may have had if it leveraged some of the wisdom and experience of its former players. How about for some help with the "red shirt" wide receivers?

Starke said: "For the last three years we've been hearing about these second-round draft choice receivers that can't run a route. First of all, running a route's not that hard, but for some reason they can't do it. See, Bruce is the kind of guy, he'd call out Art Monk, because Art lives right down the street, and say 'All right, will you come up here and show the kids how to run a route please?'"

A Hall of Famer imparting advice to a player trying to figure out what the hell is going on? That's just crazy enough to work!

We are hearing a lot about the changes taking place behind the scenes, next to the scenes, and in front of the scenes in Ashburn. In today's comments, tell me how many wins you think Bruce Allen brings to the table. Such a subjective question. I know he is not a player, and I know he has no direct effect on the outcome of games, but work with me a little bit. I am ready to hang a loss or two per season on Vinny for more than a few of the last ten.

I'll go with at least 1 win we will attribute to Bruce Allen this year. It is also fair to suggest that Mike Shanahan could be given some shared credit for this win, but he is able to effect the outcomes of games in more ways than Allen. So for the sake of this argument, make your case for how many wins and tell me how you think it plays out. 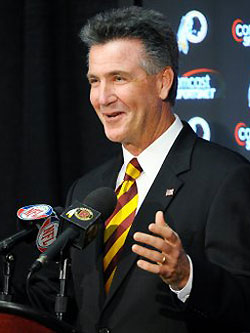