That's What He Said: Dissecting Haynesworth and His Agent's Statements

Share All sharing options for: That's What He Said: Dissecting Haynesworth and His Agent's Statements

Update 11:32AM: Via @redskinsblog, "Coach Shanahan says team told Haynesworth he could seek trade being released until 4/1, but if you take that check we expect him to play any position...he decided to take our check and we're very disappointed he wasn't here today...All our players play multiple positions...Albert hasn't been here, he has no idea what kind of defense we're running. "

I am usually one to wait for as many facts as possible before writing on emotions, but with Haynesworth and his agent releasing statements, it's on.

"The Redskins are trying to establish a new regime with new schemes at Redskins Park, and it is not an organization that Albert would have ever been attracted to just a short year ago - regardless of the money," agent Chad Speck said in a phone interview. He has made it clear to me that he does not want to play for the Washington Redskins."

Yes, Chad...that happens when you go 4-12. Would Albert really prefer to play another year under Zorn and Blache?? This is a load of crap. He got paid, and he doesn't want to have to put in the grueling effort that a Super Bowl coach and ball-buster like Mike Shanahan demands.  If it's regardless of the money, then give back the $21 million bonus the Redskins gave Albert 2 months ago and we'll gladly cut him and move on - no harm. Oh what? He wants to keep it. GFY. Who wouldn't want to play under Mike Shanahan with guys like Orakpo and Andre Carter on either side of you. This is a team sport.

"This situation will be a distraction to the Redskins and to Albert and his teammates. I am certain [head coach] Mike [Shanahan] and [General Manager] Bruce [Allen] want to get the most out of their first year and it's probably in everyone's best interests for the Redskins to make a deal and trade Albert."

YOU HAVE GOT TO BE SH!TTING ME. You wait the DAY before mandatory camp to make this statement? How is that not a distraction for his teammates now??? There really couldn't be worse timing. Not only that, your client led all his teammates on that he would be here via text. You are a sham as is your client. No one is buying this.

"The Washington Redskins are a great and storied franchise with an owner in Mr. Snyder that will do anything in his power to win and a fan base that is unrivaled in the NFL."

Yes, and thanks for nothing maintaining that "great and storied" part. You don't know anything about this franchise, so don't BS me by  blowing smoke up our ass like you do. You saw the Redskins fan-base at its worst with poor showings and booing the home team. That line is the biggest softball I've seen and it's clear you did not write it.

When I signed here after meeting all day with the staff and top executives, and talked about the defense that we would run and what my role would be, I was assured I would have the freedom to play to my strengths and I was excited about the future. After many years in the NFL, I know what it takes for me to perform at my highest level. My number one goal has always been to help my team win -period.

Guess what? Things change. How about give it a chance. What hurts coming to camp and running through some drills with the coaches and players - THEN deciding? $100 million can't give "the most storied franchise" even that? You just stated your #1 goal is having the freedom to play to your strengths...again, stop BS'ing me that it's to help your team win. That again is another bloody lie.

It's also important at my position to help free my teammates to make plays, which I've done throughout my career when I've been allowed to play to my strengths. I will continue to work individually to prepare for training camp and the start of the 2010 season."

The 3-4 defensive linemen's job is solely to make plays to free your teammates. And for the 400 millionth time, this team will still use 4-3 fronts. You're lazy, and you're stalling to get your ass back in shape. As much as I hate gold diggers (like the one you knocked up), you are now the poster boy for it. 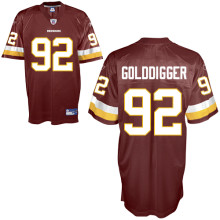 What's really frustrating about this entire situation is that this is the last minicamp before training camp. As Doc Walker mentioned yesterday, this 3 days of practice is meant for Shanahan to set the tone for players to continue to work hard with their month of July off. What a terrible way to break from camp. One of the the intrical parts to Carter and Sackpo's seasons is no longer part of the team. Shanahan originally planned to give the last day of practice off to the players for all their hard work so far. We'll have to see what happens next. Never a dull moment in Ashburn.