He does when you play Madden 2010 against Robert Henson. I took #58 up on his offer to get some Madden in against him in his Henson'ed out man-cave the other night. When I walked in the door, on one side of the room Chris Wilson was playing one of his boys in Tecmo Bowl on an original Nintendo! On the other side was a wall-size projection of the familiar PS3 Madden screen. Before I continue, just want to send a quick shout to Luther and Antoine, Chris' boys from Flint, Michigan. They were visiting their friend for the weekend and you'd be hard-pressed to find two better dudes in the whole state of Michigan.

As for my matchup against Hendog (or Henpup as some call him), I knew I needed a good squad to hang in there so I took the Jets for their defense and running game. I noticed I was being matched up against the Redskins. I won the toss and kicked off to him. Right before the kickoff though, he paused the game and went to make some subs. I knew what was coming. Sure enough, London Fletcher was given the night off and a young linebacker named Henson was inserted. The other key change was ensuring that DeAngelo Hall was the return man on all kicks, which actually turned out to be the difference in the game early. 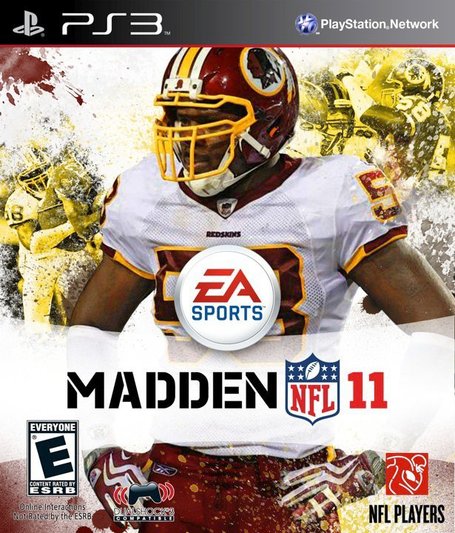 I went up 3-0 and even got the ball back before having to punt to DeAngelo Hall. It was 7-3 after that play ended. I got the ball back and drove, only to turn it over for a long run back. I was down 14-3 and Henson had yet to really get his game going yet...which he did of course end up doing.

It was a 16-minute game (4-minute quarters). I held the ball on offense for 11 minutes! I dominated the rushing yards and I played mostly solid defense. STILL...I managed to end up on the losing end of a 28-12 game.

Great commentary on random players throughout the game included:

When Randle-El caught a huge first down pass, and I scream, "ANYONE but ARE!", Robert said, "You know how some guys are one way on one day and different the next day? Not Antwaan. He was the same 24/7. Just one of the better dudes you will ever meet."

When Devin Thomas caught one-handed catch after one-handed catch, I threw a sideways look at #58 and he just grinned. I said, "If he does that on Sundays this year, then fine..."

I was making a move late in the 3rd quarter and all of a sudden the game paused and Henson yells to the other side of the room, "I need you 9-5!" He subs in the digital Wilson on the outside right as the real-life Wilson was in my ear talking about his pass rush technique. Hilarious.

Here is what was most fascinating: we looked away from the screen while the offense picked their play. When I was on offense, I would break the huddle and Henson would be sitting next to me, diagnosing my formation and calling out crazy audibles to his digital teammates. He would say "Run right", or "Screen!", or "Watch the play action!" And wouldn't you know it, he was pretty much dead on for the most part. You try running your play in Madden with a real NFL linebacker sitting on the couch next to you, calling your play out to the screen, moving his guys around like they were the damn '85 Bears.

At that point Lendy Holmes walks in the door and sits down to play Tecmo Bowl with Chris Wilson. I think the matchup was the 49ers vs. the Falcons, but all I can remember is turning around in my seat in time to see Jamie Dukes pick up a fumble and take it to the house. Nobody could stop him, and nobody would hear the end of it for the rest of the night. (Even better was turning on NFL Network later that night and seeing Jamie Dukes himself...haunting Chris Wilson through the screen.)

What I thought was going to be a typical interview type of situation turned into a night of Madden and mini-basketball in Robert Henson's basement. In fact, the only question I asked #58 all night long was, "Do you want anything from McDonald's?" That was my text message to him on my way there. (Don't worry Coach...he said no.)

Oh yes...mini-basketball. The game was H-O-R-S-E. The order was Lendy Holmes, Chris Wilson, me, and then Henson. Early on, Lendy couldn't make squat, leaving me to deal with Wilson's trash shots and leaving Henson wide open to give Lendy letters. Finally, I caught a break as Wilson couldn't even sink his own awful shot. I hit Henson up with a couple letters and before long, Holmes caught fire. By the way Lendy--you have to do something about your Wikipedia page dude...here is what it says: "During his time at Oklahoma, Holmes made many big plays and tackles." Here is what it should say now:

"During his time at Oklahoma, Holmes made many big plays and tackles. In Robert Henson's basement, Holmes is one of the most innovative shot-inventers ever seen. He has taken the game of HORSE to the next level thanks to his tireless search for the impossible angle. Where some see just floor under the netting of the mini-basket, Lendy Holmes sees his next conquest. Where some see a stuck ball in the corner, Lendy sees an opportunity to change the landscape of the game of HORSE. If Back to School was made today, the impossible dive that Rodney Dangerfield attempts would be called the Triple Lendy, instead of Triple Lindy."

I digress. Holmes and his trick shots put a lot of heat on #95, leaving me wide open to hit Henson with my Beirut Ball. Needless to say, Henson found himself spectating a game of HORSE in his own basement before long. Ultimately, I joined him as Wilson and Holmes battled it out to the end. I want to say Holmes won, but I am not so sure.

To make a long story longer, I thought I would share a few observations made while watching NFL Network with these guys. We talked about the impending labor issues, individual players around the league and different team situations as they hopped around on the NFL Total Access.

On Tim Tebow: let's just say there is not a lot Tebow can do to prevent opposing defenses from wanting a good clean shot at him.

On Jason Campbell: He is going to do well in Oakland.

One thing that stands out in my mind is hearing Chris Wilson and Robert Henson talk about a proposed mandatory offseason that could be part of an upcoming agreement. This would see players be required to be away from the team for a prescribed period of time between seasons. I wondered about this and we talked about some very sobering facts. Chris Wilson told me how the players are told (by the league and by the team) to make as many contacts and do as many things outside of football as they can to better facilitate their "transition" from football. He went on to say that realistically, if you are busting your ass to keep your job, you might have a week or two away from the team all year and you don't make any connections or develop any job opportunities that way. He said that something like 75% of players fail to successfully "transition" away from football. Divorce and bankruptcy are two of the major issues that face many players when they leave the league.

We spoke about the business side of things when Rich Eisen and the NFL Network crew were talking about who has signed their tender and who has not. "We're people, but we're also products," Chris Wilson said. He spoke with great eloquence about the fine line between the two and how players understand how it works and make the best of it that they can. All of a sudden a Miles Austin montage came on the screen and I said something about how he came out of nowhere. Henson was talking about how good Dez Bryant is going to be, and Wilson said, "I'll tell you something about Miles Austin. He's a player. He doesn't anticipate going down in a tackle. He thinks he is going to keep right on going...you have to bring him down. He can play."

My one cheap shot came when I was talking to Henson about the upcoming season. We were talking about tipped balls or interceptions or something and I said, "You just need to come down with the balls that hit you in the hands!"

He looks at me and laughs and says, "I missed ONE ball!" (last preseason, he missed a potential INT)

I had been saving that for Madden in case he dropped one on the screen, but it never happened. I couldn't let the whole night go by without giving him at least one shot, right?

At the end of the evening, I talked to Robert Henson about sharing his thoughts and experiences on the months ahead in a Camp Journal for Hogs Haven. He has a battle ahead of him and his perspective would be extremely unique to all of us in the community.

Look for the first edition of #58's Camp Journal this week.