The Thursday Line -- Will Strasburg Play Right Tackle For the Redskins?

Share All sharing options for: The Thursday Line -- Will Strasburg Play Right Tackle For the Redskins?

I sat in my seat for just about every pitch on Tuesday night. Strasburg blew me away. So let me be the 5,349,586th to say he was every bit as advertised. I am not a big memorabilia guy, but I definitely keep tickets from games like that. It went straight in there with the ticket from Darrell's last game and the ticket from Cal's last game.

And no, he won't be playing Right Tackle for the Skins...but I heard he can make a 22-yard field goal (stupid Suisham).

On to today's line:

Over/Under: Age of the Washington Redskins in 2010 -- 29
According to ESPN, the Redskins were the oldest team in the league last September, at 28.02 years old. Here is the link to that page. So 29 is already seemingly out of the ballpark since it would not only represent us getting older, but we would be older than every team in the league last year, including our own oldass selves. Damn. I would be screaming about the Under if we weren't on an apparent mission to sign every 30-something player on the open market. If guys like Galloway (38), LJ (30), Fast Willie Parker (29) and Brian Westbrook (30) make the team, that does not help our average. McNabb (33), Artis Hicks (31), Ma'ake Kemoeatu (31) and Rex Grossman (29) are probably locks to make the roster. London Fletcher (35), Phillip Daniels (37) and Casey Rabach (32) are also solidly in the fold today. Don't mistake this as me disagreeing with the way we are building this team. I kind of love what we are doing. I think we will gradually get younger as Shanahan and Allen set out drafting their own players in the years to come. This next season is all about getting some bodies in place that they trust. Maybe the Over/Under should be 30. As it stands now at 29, I am taking the Over.

Who has a better chance of making this team: Joey Galloway or Mike Furrey?
Not the Over/Under variety, but a toss-up of sorts I think. What do we have now...12 wide receivers in camp? If I am Devin Thomas and Malcolm Kelly I am legitimately afraid that long-term plans may very well NOT include me. Of course, they could always bust their humps and get it done on the practice field to earn their spots too. As for the older vets in camp, the latest signing of Mike Furrey is one I very much like. I remember sitting in my fantasy football draft in September of 2007 as it became my turn to put the next player up for bid. As the words "Mike Furrey" came out of my mouth, I knew something was wrong immediately. Not one other owner in my league placed a bid on him and I got him for one dollar. I said, "Really, nobody wants to pay even 2 bucks for the second leading receiver in the NFL last season?" Laughter was the response I received. I was immediately concerned that he was either dead or dismembered (concerned for his family as well as for the 3rd and Schlong Rough Riders, who needed Furrey to play decently in order to get the proper return on that dollar.) He had an okay year in 2007 (61 catches, 664 yards), but it is his versatility that has to be making coaches love him. He started the year last season as a wide receiver for Cleveland and finished it as a free safety and nickelback. He was one of the finalists for the Walter Payton Man of the Year Award last season so he brings a certain amount of class and character to the party. Furrey has paid some dues in both the XFL and the Arena League, and he set the NFL record for most catches (for a non-rookie) in a season following one in which he had zero catches. To me, Furrey is one of those guys that every good team has: he can play multiple positions, he doesn't need to be the center of attention and he will step up and do whatever he is asked to do. I am going with Furrey here because I believe Thomas and Kelly will do enough to hold off guys like Galloway, and Furrey will distinguish himself at multiple positions in camp. 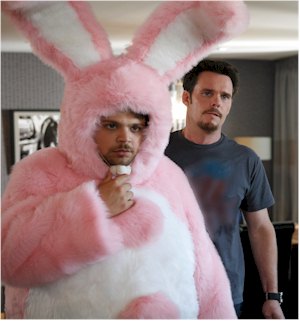 Over/Under: Sacks Allowed in Game 1 against the Cowgirls -- 3
Reports out of training camp are mixed on the offensive line to date. I have ZERO idea what that means in June, but since we are talking about it, let's talk about it. The Cowgirls have a pretty substantial pass rush. Ware is a beast and their defensive line is powerful and talented. The one thing we have going in our favor this season is that McNabb is less likely to take a sack than Jason Campbell was. Still, with a rookie at Left Tackle and uncertainty on the right side, it is tough to say how many sacks McNabb is going to have to dodge. Put me down for the Over today in June. But I reserve the right to change my vote after our linemen get the chance to put pads on and show us something.