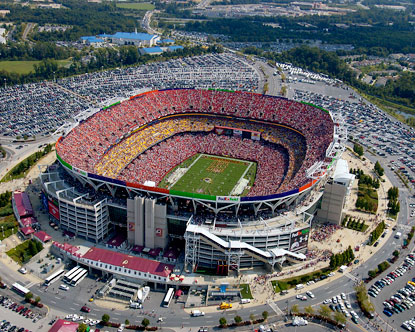 At least that's what Dan Snyder believes should happen:

"I think Washington should get one, no matter what," Snyder said. "It is the nation's capital."

That was infamous Redskins Owner Daniel Snyder on Tuesday, shortly before he participated in a league-wide vote on the location of the 2014 Super Bowl. That afternoon, New York made history and became the first ever open-air stadium in a cold-weather area. Some experts believe now that New York has won the 2014 slot, that it will open the doors for other cold-weather areas to place a bid for a Super Bowl. But some owners seemed to regard this as a one-time-only maneuver tied to the size of the New York market and the construction of the New Meadowlands Stadium, a $1.6 Billion endeavor which opens this upcoming season. What, our new billboard-sized HD screens debuting this season aren't good enough for the Super Bowl?

Many pundits and fans alike disagree with a cold-weather Super Bowl, one argument stating that it would be awful for a game-changing fumble or interception being caused by inclement weather. While some balk at the idea of weather being an issue:

"People talk about the weather, but, you know, this is football, not beach volleyball," New York City Mayor Michael Bloomberg told the NFL Network.

Personally, I'd love the idea of bidding for a slot in the near future. But let me assume to speak for all of us when I say, I'd rather play in the big game than host it...

Simply, should D.C. place a bid for a Super Bowl?