- Jeff McLane, a columnist for Philly.com, says that one of the driving reasons the Eagles traded McNabb to the Redskins...wait for it...was to keep Sam Bradford out of the NFC East. Huhhh?

But the Eagles also did not want to have to deal with Bradford, a quarterback they rate very high, for the next decade. I know one Eagles coach -- who would know such things -- that had Bradford ranked among the better quarterback prospects over the last decade. There was a reason why offensive coordinator Marty Mornhinweg was at Oklahoma last week to watch Bradford throw during his Senior Day. [Philly.com]

Poor Jeff gets blasted in the comments section, some of which are hilarious. Either way, this logic is ridiculous. The 37th pick the Redskins traded is an incredibly valuable spot. It's one of the first picks on the second day where the 32 teams will have spent 2 days strategizing their next trade-up moves. The Redskins have so many holes, Jesus Christ couldn't even QB this squad to the playoffs. Simple as that. The Eagles got the best pick available and lost their QB to a team that is re-building cleaning up Cerrato's mess. 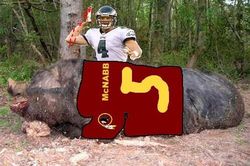 - I think we all remember how fanatic Redskins fans are/were for Colt Brennan. Well, Eagles fans are going to that level for Kevin Kolb with the Facebook group "My Quarterback Hunts Wild Pigs with a Knife, What's Yours Do?" ... and probably some of the worst photo-shopping you'll ever see. Some Redskins' fan needs to start a Facebook group "Orakpo Doesn't Need a Knife to Kill Wild Pigs." I wonder if Kolb's love for hunting pigs extends into the nightlife scene.

- Well, we're 6 days away from when players must sign their tenders, and the Eagles and Cowboys already have some dominoes falling. For the Eagles, Guard and backup Center Nick Cole inked his 1-year deal (2nd round tender). DE Jason Hatcher, OT Pat McQuistan, and NT Junior Siavii have signed their tenders with Dallas. So, what about the Redskins? Here's the list of our RFAs:

This weekend I'd think we'll start to see some moves. Jason Campbell doesn't seem like the type of player to hold out, but it's time he starts being a prick about it. The Skins have dumped on him for years, so he should throw it back. Carlos and Rocky are tough calls...if I had to guess, I'd think they sign simply because there is a competent staff in place for them to succeed.

- Tiki Barber is trading up himself...dumping his pregnant wife to continue dating his 23-year old mistress. Stay classy. That turned out to be a bad idea because now he's having trouble finding work. I can't say he ever added anything to TV anyway. Well, he's always got a chance with the Redskins given their affinity for RBs over 29! Why the hell not...sign him too. The NFC East 2006 All-Star squad.

- The Eagles are linked to everyone imaginable given their high number of picks. Michael Lomardi thinks the Eagles must draft a high impact defensive player, such as a DE. I still believe the Eagles will make a push to get Eric Berry.

- The Cowboys on the other hand are channeling their inner Vinny Cerrato and are dead-set on getting another WR. DallasNews.com is reporting via a NFL Insider that the Cowboys madly want Jordan Shipley. The WR from Texas is slated as a 3rd pick, which would make Patrick Crayton expendable.