We Catch Up With Former Redskin and Hog Mark Adickes; Hilarity Ensues

Share All sharing options for: We Catch Up With Former Redskin and Hog Mark Adickes; Hilarity Ensues 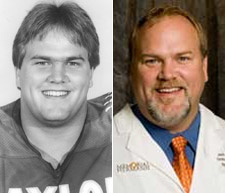 How many of you remember former 1990-'91 Redskins' Guard, Mark Adickes? He had the luxury of playing with the Hogs in that 1991 Super Bowl run, but what's unique to Mark was his career path after playing in the NFL. Upon retiring, Adickes attended George Mason University and subsequently, Harvard University Medical School. From there he completed his residency in orthopedic surgery at the Mayo Clinic in Rochester, Minnesota. How many offensive linemen you know did that? Well, he's now landed himself a show with Fox Sports Net called Athlete 360. Specifically, it's a new sports medicine program that offers fans a unique opportunity to get to know the athletes they love, inside and out - literally. Featured athletes include Kevin Everett, Mark Schlereth, Dikembe Mutombo, and more. Adickes currently serves as team physician for the Houston Rockets, United States Ski Team among others, and practices in Houston, Texas.

Ken and I had the chance to ask him some questions regarding NFL injuries, and of course, we were able to dig out some great Russ Grimm, Joe Jacoby, Mark Rypien, and "Hogs" stories. We have to live up to this website's name, right?

Mark Adickes: I would say about 5%. These guys are all highly conditioned...even those that may appear obese to the general public. Everyone works on strengthening, endurance and flexibility. It is now pretty much mandatory that all players participate in the off-season conditioning program - in fact, most players have provisions in their contracts paying them big dollars for attending. Some guys are going to circumvent this process, though, and it is these few who sustain injuries due to poor conditioning. There is also a group that is injured despite excellent conditioning. Then, upon return to play, suffers a different injury because their conditioning suffered during rehab. All players can't wait to get back on the field and occasionally they are not quite ready with regard to their conditioning.

Given the training table at Redskins Park was filled with burgers and fried food (confirm or deny?) back in your days, how is it that you guys didn't suffer more injuries?

Mark Adickes: Now in all fairness we did also have the option of filet-o-fish sandwiches and for a healthy dessert, deep fried McDonald's apple pies. Gotta have some fruit! My first day at Redskins Park I couldn't believe what I was seeing. They just brought in the paper bags full of Micky D's, dumped them on a folding table in the gym, and we consumed all we could. I don't think I can blame injuries on the fast-food but life expectancy will almost certainly be effected. Oh well, big dogs die young.

With the recent retirement of Joe Bugel, a lot of hey-day stories came out including the Russ Grimm hot dog one. Is there a funny story you can share whether it be a prank involving a teammate or in-huddle conversation regarding an opposing player?

Mark Adickes: Well, a Russ story that comes to mind occurred during the '91 Super Bowl championship season. "Porky" (Russ Grimm) was playing tight end in short yardage situations and dropped a couple of passes in the game. In his defense, on both occasions he was well covered and any catch would have resulted in an immediate move to wide receiver the throws were so difficult. The result of the drops was a lineup change moving me to tight end in short yardage. Tony Kornheiser, in his "Bandwagon" column, dubbed Russ "The Flea" for his lack of success as a receiver. Russ, Donny Warren, Jeff Bostic, and Joe Jacoby then let Mark Rypien know in no uncertain terms that he was to make me look bad in practice. He threw one bad ball after another in practice and I caught every one. One handed catches, diving catches, catches in traffic...you name it, I caught it.

The moment of truth came in game 16 against the Eagles in Philadelphia. Near the end of the game they called my number. I ran out into the flat on the left and was wide open. Rypien threw me some wounded duck and time stood still. All I could see was the horde of defenders running at me. The ball hit me in the wrists, slipped between my legs and fell to the ground. As I landed the ball popped up into my lap so that it appeared to my teammates that I had made the grab. They rushed to me celebrating as I sat on the ground in my embarrassment and humiliation. We lost the game, only the second of the season, 22-24. I just wanted to crawl into a hole. The next day in the Washington Post Tony Kornheiser tagged me with the nickname "The Tick". So that is the story of how "Porky" and "Drug" (my nickname Drug Adickes...get it? drug addicts) became "The Flea" and "The Tick."

Is there anything from your time in Washington (and maybe even being with the "Hogs") that helped contribute to where you are today? (since you enrolled to George Mason upon retiring).

Mark Adickes: Obviously Joe Gibbs and all of my fellow "Hogs" had a positive impact on my life. The experience of playing for and competing with those guys will be cherished forever. That said, there is nothing like team sports to teach you how to excel in all of life. Despite the aches and pains endured daily now, I wouldn't change anything about my life. Football taught me how to set goals. How to work hard to achieve your goals. How to take criticism. How to be a leader. How to keep your mouth shut until you actually earn somebody's respect. It also teaches you about delayed gratification. Sometimes you don't get your turn to shine until you have paid your dues. Sometimes that wait can be years.

Sports, if you play for any length of time, also teaches you how to overcome adversity. In my case I had plenty of injuries, surgeries and rehabilitations. My career made me want to go out and help people who have suffered from some of the same injuries I have endured. I also wanted a second career that tangibly tied my first career to my second. What could be better than orthopedic surgery with a specialty in sports medicine?

Carson Palmer recently said in an interview that he believed somebody was going to be killed on the field at some point. Do you agree with this assessment and do you think it is tenable to prevent the kind of catastrophic injuries that are possible in the NFL, or will they always be "part of the job?"

Mark Adickes: Because of the doctors and emergency personnel available at the stadiums, it is very unlikely someone will die on the field. Really only four things are going to lead to death on the field. (Excluding heat stroke, which can lead to death but would not cause sudden death.) That leaves massive head injury, cervical spine injury, cardiac contusion, and some congenital heart problems.

Massive head injury: Rules adjustments, better equipment, better conditioning, and readily available medical personnel should prevent any sudden death from occurring. A blow to the head could, as we've seen in boxing, lead to death soon after the injury. I would not be surprised if this occurred at some point but not with a death in a stadium.

Cervical spine injury: We have had players suffer catastrophic spine injuries. Even injuries high up in the neck that injure the nerves that control breathing would be unlikely to cause death on the field because of the rapid medical response.

Cardiac contusion: There is an entity called Commotio Cordis, that actually occurs more often in baseball, where the heart stops irreversibly after a blow to the chest. Could happen but again unlikely.

Congenital Cardiac Issue: There are a number of deformities and arrhythmias (abnormal heart beat) that could result in death. We have seen this in the NBA with Len Bias. Fortunately this is screened more closely today to avoid this from causing any fatalities in the NFL.

So all-in-all I don't foresee a death on the field occurring but it wouldn't be impossible.

Here's the teaser to his show....looks interesting. Injuries in sports is something I'd certainly like to learn more about. What the medic staff did in saving Kevin Everett from paralysis is beyond my comprehension. You can also follow the show on Facebook and twitter.