Maurice Greer: the Next Mike Shanahan Running Back Gem?

Share All sharing options for: Maurice Greer: the Next Mike Shanahan Running Back Gem?

There are two areas of need the Redskins did not address in the draft: Running Back and Free Safety. I'm not going to lie, I was pretty pissed when the draft ended without a RB, but alas...the Shanaplan might have uncovered a gem. When you look at Super Bowl contenders, they have DYNAMIC players at these two positions. The Redskins, eh, not so much. The depth chart (of notables) as I see it now:

Does that RB lineup scare you? It might scare Ken or this kid, but definitely not any NFL coaches. Obviously Shanahan will draw up more creative game-plans and play-calling than his predecessor, but any of those top three guys will get caught from behind in the open-field. Remember that 74-yard run against the Chiefs where Portis got caught from behind? The Redskins then go 3 and out, kick a FG, and subsequently lose to the Chiefs. Shockingly, Clinton Portis' longest touchdown as a Redskin was his first carry back in 2004, and I don't expect that streak to be broken.

I'll get to Free Safeties tomorrow, but it's clear the Redskins need a speedy ball carrier. So that leaves undrafted free agents as our best option, and the Redskins are bringing in the following three so far:

Maurice Greer stands out as a player that fits the prototypical Shanahan running back: Hard-working, strong motor, and speedy. The work ethic Maurice put in to over-coming cancer is evident of that.

Looking at Greer's stats, I really don't understand at first look how he's the third RB on Troy's depth chart. 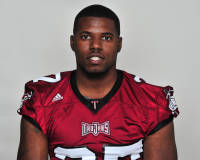 Looking at his game-by-game stats it's evident he struggled against the big schools, namely Florida, Arkansas, and Arkansas State. Like all highlight videos (see below), he looks very impressive. It should be said that Alcorn State's defenders look like a High School team, but his speed and 0 career fumbles stand out.

I've been looking forward to this draft so much since Shanahan had all of 2009 to watch college football - a luxury no NFL coach has. Having said that and knowing how few picks the Redskins had...he had to have eyed up some RBs he could grab as UFAs.

Since there's almost nil scouting info, what does Maurice say about his skills?

Greer: "I have good explosiveness and I like to hit the holes hard. I have a good stiff arm and have great breakaway speed. I want to make sure I keep my pad level down and play lower and more consistent all the time. I also want to get stronger."

Greer was a highly sought after high school recruit that originally signed with Colorado. He didn't meet academic requirements and was forced to go to junior college. While at Garden City(KS) CC, something much more important kept Greer off the field. In 2006, he was diagnosed with testicular cancer. After surgery and chemotherapy, he found out the cancer was gone....He runs with authority on the field, and packs more punch than his 5'10 210lb frame would suggest. He has the quickness to the hole, and gets to top speed quickly once he makes a cut. [Footballs Future]

Update: RB Ryan Torain is also a dark horse to make the squad. Shanahan drafted him in the 5th round of the 2008 draft, but has seen very limited action since tearing his ACL early in his career. He didn't play last year.