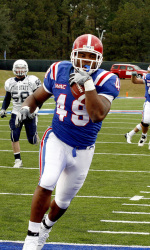 Just what we needed. Another...tight end? I was just starting to think we were going with the "Best Player Available at a Position of Need" strategy. Forget Blount, LeFevour, and even Jonathan Dwyer (taken 14 picks later by Pittsburgh.) There were offensive linemen available when we took Morris that I thought had a chance to make this team, Sam Young chief among them ( Young went to Dallas a handful of picks later.)

Since we did take the stud Offensive Tackle with our top pick, I find it easier to kind of roll over on this one. My blind faith in Bruce Allen and Mike Shanahan at the moment has me wondering if Dennis Miller is a Hall of Famer...I must still be feeling the effects of the draft party on Thursday night.

Morris was an All-American in 2009, and he was voted the top tight end in the country by the College Football Performance Awards. He is shorter than you would want in a top-flight pro tight end (he is listed at 6'1") but he is noted for his sure hands, his ability to go and get the ball, and his yards after the catch. Entering the draft, he was slated to be an H-back/fullback. So it looks like we are getting an heir apparent to Mike Sellers as opposed to someone who will languish behind Davis and Cooley.