Share All sharing options for: 2 Reasons the Redskins Are Taking Okung (Assuming They Can't Trade Back) 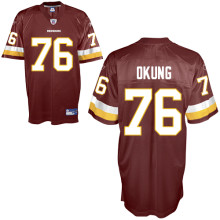 Across Skins Nation...
Around the World...
Ev'rybody Okung tonight.

So dammit, yesterday I fell into the smoke and mirrors trap I was trying so hard not to. I'm used to trying to wave through the smoke from Vinny's crack pipe, but Shanahan and Bruce's smoke...it's a different type...more like a morning fog. Clean, yet honestly deceptive; however, I broke through it today with some of Rich Campbell's insight.

Multiple "experts" have Trent Williams as a "perfect fit" for Shanahan's zone-blocking scheme...blah blah blah. Rich Campbell, the Redskins beat writer for Fredricksburg.com, put together a fantastic article comparing Mike Shanahan's previous 1st round LT pick, Ryan Clady's combine, to that of Russell Okung's combine....and the stats are almost identical. Same 40' time and almost identical measurements in height, weight, reach...everything. Add in the fact Okung benched 225 lbs a whopping 38 times to Trent's 23....how does Okung beat Trent Williams? Does Trent sound like a pick worthy of #4? Okung's only knock was his speed/feet,  yet his comparable 40-time to Clady is proof that's a farce. Another key point to remember is Okung has 4 years experience at Tackle, including many games having to defend Mr. Orakpo. He's as battle-tested as one can hope for.

1.) The Trent Williams hype is great for making Detroit second guess Okung (if they were considering him). Suh is therefore the much safer pick even though the Lions desperately need a LT. Nice work Shanny.

2.) With 836 snaps played this year, Okung has allowed only one sack and has yielded only two quarterback pressures.

Note: Don't be surprised if the Redskins trade back. They're hyping up Clausen for a reason - they want their 2nd round pick back. Packaging our #4 pick with Haynesworth or Campbell should not be surprising, but as Bruce Allen said...it's difficult to trade out of top 4. Stay tuned.