Chris Samuels has been asked by General Manager Bruce Allen to be the Redskin's 'Runner' during the NFL Draft. [Source]

Who actually turned the picks in to the commissioner has never really mattered to me.  To be honest, I really cannot recall who turned our selections in last year or in the years before.  This year's Runner could carry special significance, however.  Ten years ago Chris Samuels was selected third overall to be the cornerstone of the franchise for the next decade.  On Thursday, he could be the first man to greet his successor.  We all realize that this is just football--but this could add a bit of symbolism as the Redskins close a dark chapter of our history and begin writing a new legacy.   Who better to first shake Russell Okung's hand than his new mentor? 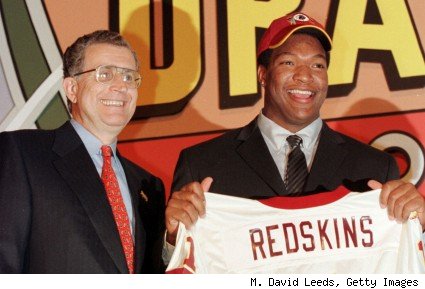