Pour Some Sugar On Me - Who Stood Out At the Combine (Good or Bad)...From a Redskins Standpoint

Share All sharing options for: Pour Some Sugar On Me - Who Stood Out At the Combine (Good or Bad)...From a Redskins Standpoint

Trust me...I do not think teams should be basing their draft plans on the Combine. But there are always guys who gain fans in front offices around the league with studly numbers at the Combine. In this week's Ten Yard Fight, I highlight the guys who I think should have turned some heads in the Redskins' Front Office. Of course, my thoughts are mostly based on need, but then again, a few guys I know we won't (or shouldn't) draft caught my attention.

1) Ndamukong Suh - Might as well start with the obvious. Did you see him? He looked rock solid in all his drills. He ran a sub-5.0 40 yard dash, which always impresses me when it is a 300+ pound guy running. He did not dominate all the drills but there was nothing he did to suggest he is not exactly as advertised. He is cemented in the top 3 of this upcoming draft. If he miraculously falls to the Redskins at #4, I would have a really hard time justifying passing him up. Game film of this guy is simply amazing.

2) Tim Tebow- I know...I know. I am not advocating drafting Tim Tebow. What I am saying is that if you scan the scores for the main drills, you see one name dominating first place among quarterbacks: Tim Tebow. He was the #1 performer in: Vertical Jump, Broad Jump, 3-Cone Drill, 20-Yard Shuttle, and 60-Yard Shuttle. He posted the 4th best 40 yard dash time as well. Interestingly, his numbers would have almost all been in the top 3 or 4 of the tight end scores. Just saying. As Tim Tebow himself said, "It only takes one team" to like him as a quarterback for him to get that chance. But his "measurables" (and I am not referring to what is beneath his spandex Kevin) offer up some distinct options to NFL teams. If he is not ready to play under center for 50 snaps a game, he could still add some value to his club. The problem is if he gets drafted - and paid - as a quarterback, teams will be less likely to throw him out for special teams and as an extra tight end...maybe. I suspect he will be drafted way too early for a team like the Redskins to justify taking him as a "project" or "luxury" pick so we can all rest easy.

3) Taylor Mays - This is in real no particular order, other than how these guys pop into my brain. When you see Taylor Mays in video highlights of the Combine, tell me who you think of Redskins fans...tell me. Because there is only one answer and we all know who that is. It is totally unfair and unnecessary, and to be frank, it is totally unlikely Taylor Mays can step in and be Sean Taylor in the pros (even the name similarity bugs me out.) We have all been spoiled though haven't we? We had a guy at safety who was monstrously big for his position, impossibly fast for his size, and had an insatiable hunger to dominate. The fact is we will spend years envisioning the next Sean Taylor in our defensive backfield despite the fact that it simply is an unlikely outcome. Taylor Mays is big, fast, and mean. I would love to see him in burgundy and gold, especially after seeing him standing next to and among the other defensive back prospects. Seriously, he looked like their daddy. Our only chance to get him (given our current slate of picks) is at #4, so it ain't happening.

4) Trent Williams - OK...back to the meat and potatoes of our draft. Here is a guy that people are projecting as a probable right tackle. Guess what? We NEED one of those. And he looks really solid. His name popped up on the top performers list for a number of the drills for offensive linemen and teams seem to be really warming up to the idea of taking him in the top half of the first round. We shall see if that lasts until April but what I saw was a pretty athletic big man that would start for us on Day One. Again, you only get one pick in each round. If you like someone enough, you take him if you think he will be gone the next time you pick. At the #4 spot, this might be a reach, but some team is going to have to make this call on him and my guess is that he will creep up a few picks higher than he is "slated" to go. 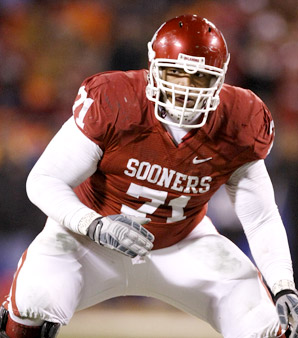 5) Eric Berry- I know I led with Taylor Mays, but when I saw Mays on that field, all I could think of was ST. Eric Berry was a hair behind Mays in the 40, but did anyone else see this kid jump? You almost had to call it flying he got so high up there. I recall that being yet another attribute that Sean Taylor brought to the table. He could reach up and get a ball that seemed to be over his and everyone else's head. Berry also exploded in the broad jump as well, posting the second best jump of the entire combine if I read my stats correctly. All this means is that he is a nasty, disgusting athlete. We knew that already. You put that together with his collegiate career and you have somebody who I remain firmly behind if the Skins decide to go with him at #4.

6) Dan LeFevour- How am I not going to put him down? You all know how I feel about him. He didn't throw....so what? He started 53 college games. That is plenty of tape to review and watch. I liked his 40-yard dash time (2nd fastest quarterback at 4.66), and I thought he gave Tim Tebow a run for his money in the 20-Yard and 60-Yard shuttle. He is clearly very athletic and to me helped himself a little with his showing. He is going to have to put in some serious time between now and his pro day so that he can prove to GM's he can exist in an NFL offense, but it says here he is going to be an above average NFL quarterback.

7) Jahvid Best- He blew away the field with his 40 time. He had the best time for a running back and did well in the 3-cone drill and 20-Yard Shuttle. A lot of folks out there consider this guy as little more than a change-of-pace back in the NFL that can double as a kick returner. But his raw speed and athleticism cemented him in the minds of NFL GM's who think he can do more. We need a running back and this guy looks like he can play. You would hope that Shanahan can find a guy that teams are down on to take in the 2nd round or later (possibly via trading for additional picks) to work into our RB corps. Not sure if Best is the guy or not, but he certainly impressed in Indy.

8) Bruce Campbell- I love my Terps of course and this particular Terp wears the badge of "Workout Warrior" after this combine. The guy is monstrous. He looks like he is carved out of stone..wait, scratch that...he looks like he is carved out of a mountain. He jumped through the roof, and based on his 40 time, he could have run the 40 yard dash twice in the same time it would take some of the slower prospects from recent years to run the 40 once. I wonder what number he will wear for the Raiders? 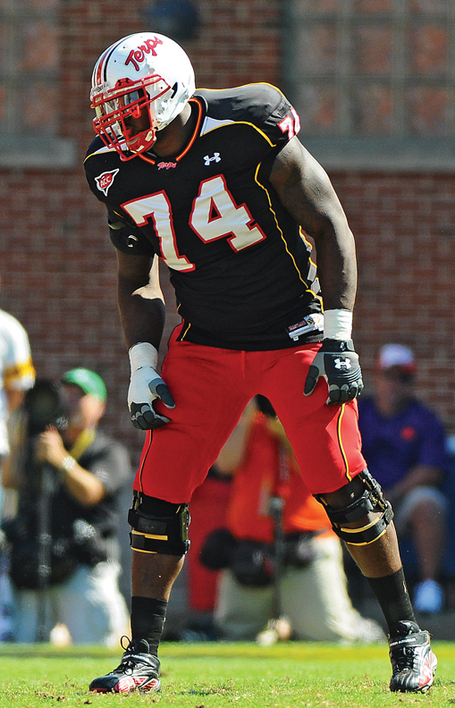 9) Joe Haden- This guy did NOT impress. As the first cornerback expected to be taken off the board, he did not put the numbers up to back those expectations up. The Redskins are going to need to add a young corner in the next year or two and while this draft was probably not the year they were looking to do that, if Haden is the best guy out there, we might be lucky to not have our hand forced.

10) Russell Okung - Here is another guy who could probably only have hurt himself at the Combine. But he didn't. In fact, the strength he demonstrated on the bench press locked him in as the can't miss tackle prospect he is largely considered to be. At #4, this is the name most Redskins fans are expecting to hear called. If that is how it plays out, I think we will all have reason to be very happy.

Where was Jon Gruden? I guess I got all my hopes up for nothing. I was tempted to include Rich Eisen on this list. He was actually pretty good throughout. He also ran the 40 yard dash...here is the video: