WalterFootball.com had the Redskins selecting the Hoosier in the 2nd round, so I thought it merited taking a closer look. Saffold in January was a projected 5th round pick, but he has climbed up the charts with his combine and appearance in the East-West Shrine game. He is projected to play RT or Guard and like the other profiles I have selected, can handle a zone blocking scheme.

Saffold never left the starting lineup after sliding in at left tackle midway through his true freshman campaign. He was the 2009 Don Howell "Outstanding Offensive Lineman" Award recipient, given to the outstanding offensive lineman in memory of Don Howell. Saffold started 41 games and appeared in 42 in his career.

Scout Analysis after the jump... 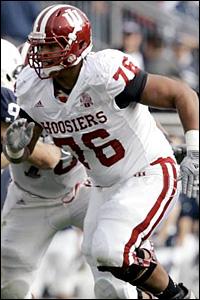 Saffold has raw athletic ability in space and does an above average job of reaching defenders at the second level; he did a solid job on NW's Corey Wooten though he had tight end help some of the time. He displays good athletic ability in space with the quickness to cut off rush lanes once he loses contact with a pass rusher. He generated a pretty decent push in the first half in the run game against Corey Wooton.

Does a nice job reaching defenders off his frame in the run game and uses his athletic ability to chip at the line and seal at the second level. He has an above average first step off the edge and has the range to consistently reach corner on his initial kick-slide. Most of Indiana's big runs this season have come on his side.

At times he can get too wide with his footwork and will struggle to keep his base compact in pass protection. On occassion he doesn't generate much power when extending his arms into blocks and is easily disengaged from on the outside. He has a tendency to overextend and get off balance. He has decent feet but can be beaten around the edge.

Due to his tendency to get too high and lose leverage when facing quick-twitch edge-rushers, he struggles to quickly redirect and anchor at the point. Also he can be overwhelmed on contact and fails to consistently stay on blocks.

Despite his size and speed he's not a dominant in-line run blocker and struggles generating much push at the point of attack, he doesn't possess the body control to consistently stay on linemen through the play and is eventually disengaged on contact.

At times he really struggles to stay on blocks. In the 2nd 1/2 of the game versus Wootton despite a good early game he didn't do much that was noticable [in a good way,] in the run game against strong defenders he has struggled to generate movement in the running game.

I don't know enough about this kid to say one way or another if he's good pick at #2. It seems a bit of stretch with the other talent out there. have any of you seen him play?