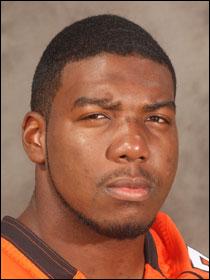 "Tell me something I don't already know?"

Redskins fans know first hand what a top 5 pick on a Tackle can produce...Chris Samuels. At this point, there isn't much more to say. The Redskins desperately need OL help, and the fact the RT and LT are both wide open, I don't think any amount of selling Shanahan and Bruce do that they are drafting a QB will convince me they are. Here are some stats that validate taking Russell (full Pro Bowl roster tables with pick numbers after the jump):

Andre Smith had red flags, so it's hard to compare that fat blob to the physical size and health of Okung. Jason Smith had concussion issues missing 5 games, so that's a little fluky. He'll need more time before making an evaluation.  Michael Oher, who many people on this site wanted the Redskins to take last year (assuming Orakpo would be gone), played extremely well.

Looking at the charts, it's the first round picks for OL that dominate the pro bowls. This isn't the case as much for other positions. Can I ink the Redskins in for Okung already? (The one little hiccup is that the Lions GM has already mentioned he's confident he can trade out of his spot).

It would certainly make more sense to have new OL coach Chris Samuels have someone to groom, eh?