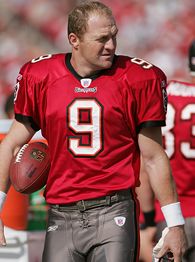 The Hunter the Punter era is over. Redskins signed Josh Bidwell, the free agent Punter from the Buccaneers. Bidwell, who just turned 34, was a 4th round pick for Green Bay in 1999 and managed a Pro-Bowl appearance in 2005. He's an upgrade from Hunter statistically in pretty much every category (except for rushing and passing TDs). Unlike last year, I doubt the head coach will spend the first 3 minutes of his intro speech on Fan Appreciation Day at Training Camp talking about this signing. It's hard to get excited since he was put on injured reserve last August for a hip injury. Statistically, he was better than Hunter Smith before the injury.

A comparison to Hunter Smith's stats after the jump.