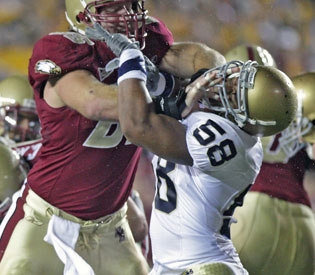 It's safe to say there will be an uproar if the Redskins don't use at least one of their first two picks on the offensive line. Matt is a 3-year starter in a zone-blocking scheme and is the nation's second ranked Center behind Florida's Matt Pouncey. Matt has taken some game reps at Guard, which could make him the perfect candidate to take over the Center position in 2011 and fill a Guard hole this year.

Matt talking about this exact topic at the combine:

"You know, some guys talk about strictly center, other guys talk about trying all three. It depends on the team and their needs." He added, "I'm a bigger center, a taller guy, so I don't necessarily have to be confined to center. I played tackle in high school, a little bit of guard at BC before I started playing center, so I have that experience. It's just getting accustomed to those reps."

2009 Season: Named one of two offensive captains...started all 13 games at center and started the last 41 games there...BC ranked 39th in the country in sacks allowed (1.54)...blocked for RB Montel Harris who had the fourth-most carries in the country (308) and the 10th-most rushing yards (1,457)...the line helped Harris record eight 100-yard games.

Detailed scout analysis after the jump...

Pass blocking: Good hand punch to get the defender off-balance and shows some nastiness in attempting to de-cleat the defender when the opportunity arises. Good lateral agility to mirror the defender. Keeps his shoulders square and plays with leverage and balance due to proper knee bend. Plays high and can get in trouble anchoring against shorter, powerful defensive tackles.

Run blocking: Moderate and improving strength to wall-off and sustain. Can turn and control his assignment to keep him from making the play. Flashes some explosiveness in his initial pop, but needs to add more strength in his upper body to sustain blocks longer.

Pulling/trapping: Efficient combo blocker. Provides a pop at the first level, but is agile enough to get to the second level and deliver an effective block there as well. Good lateral agility and initial quickness to pull. Athletic enough in this area to consider moving to guard at the next level.

Initial Quickness: Good initial quickness to gain an advantage on the defender. Good burst off the snap for the cut-block on quick throws.

Downfield: High-effort player who looks to block downfield and isn't afraid to block to or through the whistle. Very good foot quickness and balance to get to the second level and adjust to the moving target.

Intangibles: Tall, almost lanky athlete for the center position. Room for additional muscle mass. Legitimate NFL athleticism. Reliable shotgun and traditional snapper. Durable player entering his senior campaign with 41 consecutive starts. Has the athleticism and body style to consider moving to guard. A bit too lanky for some teams at center.

He was able to keep his starting streak alive despite having Tommy John surgery on his left elbow after the Eagles' bowl game following his junior year. That surgery was performed in Cincinnati by Dr. Tim Kremchek, who is the Reds medical director and chief orthopedic physician.

One Tommy John surgery would be plenty but Tennant is a bit of a rarity - he's had it done twice and on different arms. During his junior year at Moeller, he had the procedure done on his right elbow, which he also injured in the last game of the season.

"I fell down both times and tried to catch myself and just dislocated one and hyperextended the other," Tennant said. "There's no problems whatsoever. They both feel great, and I have full strength."

Tennant weighed in at 300 pounds, which he considered a goal. He didn't want to be the only offensive lineman to come in under 300. He does feel that he can play at 300 or 280, which he has done in the past. Scouts like Tennant's quickness and the ability to be light on his feet as well as being a solid blocker. His greatest asset though is his versatility. Tennant played tackle at Moeller and some guard at B.C. before moving to center. Teams have talked to him about playing all three positions and he did take some snaps at guard during the Senior Bowl. - Joe Reedy, Cincinnati Enquirer

"I fell down both times and tried to catch myself and just dislocated one and hyper-extended the other," said Tennant, who ran a top 10 40-yard dash time of 5.16. "I can pitch. I have a great fastball now. No, there's no problems."